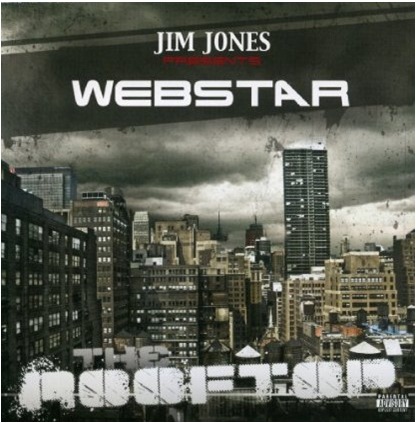 Chicken Noodle Soup with Harlem’s American Gangster on the side? As odd as that collaboration might seem, both Jim Jones and Webstar are Harlem natives who love their hood, although Webstar might love his lunchtime special more – after all it’s his only claim to fame thus far. At least lil’ Webstar is all grown up now, because the last time out he was too young to even get a parental advisory sticker. Now he’s got the R rating and a cell phone of his own, and as a result he and his crew (Young B, Young Deion, Rex & Ricky Blaze) have some advice for you: “Follow Me on Twitter.”

Wait – did Webstar just drop a KKK reference? I’m pretty jaded, I’ve heard it all in hip-hop in the last 25 years, but that still strikes me as being ignorant. Actually the whole concept strikes me as insane. Sure I’ve got a Twitter account, almost everyone has one these days, but I’m not writing songs begging people to follow me or calling followers “my twiggas” like Young Deion does on the song. Personally I can’t imagine why I’d follow any of them, although to Deion’s credit his verse is the most creative of the crew, actually referencing TwitPic and ustream in his rhymes.

Oh that’s right – Jim Jones is on this “Rooftop” album too. In fact he and Webstar already have a hit off this shit called “Dancing on Me” featuring Juelz Santana and Remo, produced by the latter and Web together. It’s that new 2009 New Boyz sound, where a lack of production becomes a style all its own, with just a few notes and a drumbeat, plus an AutoTune chorus. Actually Jones seems to be tuning his verse on the song as well:

“Pull up to the club and that Lambo’ is lookin sweet (SWEET!)
Don’t know ’bout you, but her hands was on me (stop touchin)
Then she start to feel like the hammer was on me
But she want to lick the w/rapper like the candy was on me (JONES!)”

Okay – Jim’s w/rap isn’t blowing me away here either. What exactly is the point of this team? I get that both Jim Jones and Webstar are from Harlem, but a good collaboration is supposed to bring out the best of both artists. Instead I get this recurring feeling that Webstar has dragged Jim Jones down to his level instead of Jones bringing Webstar up to his. That’s a problem given Jones is not among the all-time greats to begin with, although he did reach a peak on “Pray IV Reign” this year, which received decent marks from staff writer Pedro Hernandez and tied his best score for lyrics yet – 7.5 out of 10. In a relatively weak crew of DipSet rappers, Jones personality usually stood out, and at least one of his songs “We Fly High” topped the Billboard Rap Charts three years ago. BALLIN’!

So yes, I have more respect for Jim Jones than I do for Webstar, but I’m not sure how either one really inspires the other here. “O.M.G.” just rips off more teenage cell phone behavior like it’s cute, has another bad AutoTune hook, and Jones bragging that he’s “fly like United” proves that airline references ought to be permanently retired – and his verse is the song’s highlight. A drumbeat and a blowing whistle don’t constitute production either, although the backdrop acquires some melody by the time the hook comes in. “Uptown” sounds like SOME effort was put into it thanks to Dame Grease, although it too has some parts with nothing but a drum and clap. Lack of melody seems to be Webstar’s favorite beat, which I suppose is well matched with his lack of rhyme writing ability.

Sad as it is to say I think my favorite parts of “The Rooftop” are actually the Brucie B interludes and skits. Haters is a favorite topic on this album, particularly on the closing song “Laughing at the Haters,” but the chorus notes that said haters are in the club staring at them, followed by rap lines indicating Webstar’s erstwhile crew are “ballin’ like Jordan when he played for the Bulls” with “Grey Goose bottles and ain’t none of ’em full.” Let me be real about it – it’s not hating to simply state the fact that rappers talk about a rarified air most of us don’t breathe. I’ve seen what a bottle of Grey Goose goes for at the club – $350 if you’re lucky and that doesn’t include tax or tip. The majority of the prospective consumers of this album have a hard enough time deciding to drop $10-$15 on it, let alone go to a club and buy multiple bottles of vodka just to get pissy drunk – especially when one bottle could be half your monthly rent. Sure you could get a bottle cheaper at the grocery store or Sam’s Club, but that’s not BALLIN’ at all. The whole point of ballin’ is conspicuous consumption, flaunting it just to show you can, and if you’re throwing away money just to prove you can do it why wouldn’t people hate on you? Then again those same people at least got in the club – those ugly people like me who don’t date supermodels or pull up to valet parking in a Bentley ain’t gettin’ inside the club for no amount of cash. Therefore I’ve got better things to do than hate, just like I’ve got better things to do than listen to “The Rooftop.”

Congratulations to Jim Jones and more importantly congratulations to his younger protege Webstar. You’ve got all the time and apparently all the money in the world, so if you want to live it up right now, get it while the getting is good. Sooner or later people will move on to something better, so if you’re not having fun now, you’re not going to have it at all. If Webstar ever has anything of substance to say, maybe I’ll change my mind and follow him on Twitter, but I don’t even follow people I actually like. B-Real just tweets about his 420 blastoff. Matt Hardy just tries to work the marks. Maseo from De La Soul only tweets when he’s broadcasting a new mix and sometimes does it for every single song – that’s obnoxious. I stopped following all of these people, so if you think I’m hating on Webstar for having nothing of substance to say, you can stop following me too.