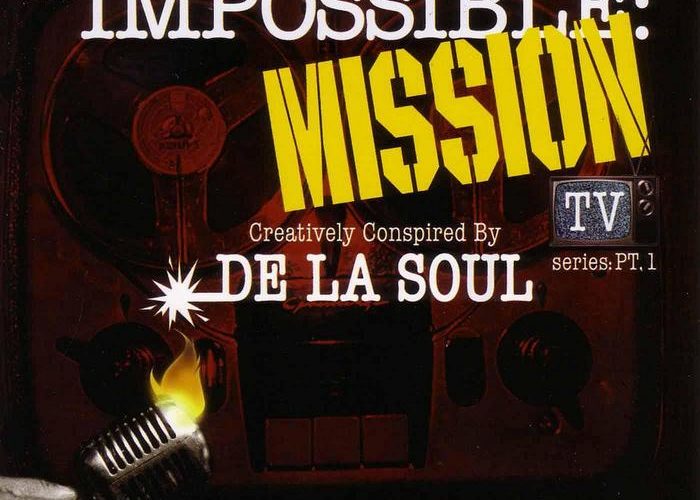 It ain’t easy being De La Seezy. They are considered to be among rap’s most influential and pioneering artists, authors of seven seminal hip-hop classics since 1989 including most recently “The Grind Date” in 2004. Despite their legendary status the triumverate of Posdnuos/Plug One, Dove/Dave and Maseo/Mase seem stuck in eternal hip-hop limbo, forever looking for a label to put out their records and a mainstream audience that embraces their musical greatness. De La Soul never has to fear losing their iconic status or loyal cult following, but they do have to question whether there’s anybody in the music industry who can properly embrace their musical vision and bring it to the masses, because if ANY rap group has ever deserved to go more than double wood each time out it’s De La.

Unfortunately De La Soul seems to be right back in the temporal nexus of unheard greatness with “Impossible Mission TV Series Pt. 1.” First of all this album is next to impossible to find on store shelves of any large retail chain. In fact I was completely unaware it even EXISTEDuntil a fellow fan pointed out to me one solitary listing of this CD as a Japanese import. Not too long thereafter I was able to find a domestic release version at the local mom & pop record store, but this arrived on shelves with no fanfare or advance warning whatsoever, and when one of the ten most important rap groups in hip-hop history can drop an album unheralded that’s a PROBLEM. Lastly I hate to pick on Red Lion Entertainment for dropping the ball on this one, but it’s hard not to when the website listed on this CD’s back cover EXPIRED and has since been snatched by a domain name harvester who now uses it to redirect visitors to Detroit Lions tickets. If you’re think that makes Red Lion something of a joke, at least as much of one as the Lions themselves, you’d be thinking the exact same thing that this writer did.

So what’s a legendary rap group to do with no distribution, no publicity and a record label that can’t help them out with either? Keep on grinding it out anyway. “Impossible Mission TV Series Pt. 1” is an overly long title which really does nothing to explain what this album is, and the liner notes inside the disc itself are non-existant (no production notes, no group pictures, no thank yous or ANYTHING) so let me break it down for you – this is an “everything but the kitchen sink and then the kitchen sink for the hell of it” De La album. It’s an eclectic mixture of live raps, new tracks, and unreleased studio gems from their 15+ year recording history. Some would be tempted to call it a “mixtape” as a result but it feels much more like an album than most mixtapes you’ll come across considering these are full length songs uninterrupted by excessive DJ sound effects or self-glorifying shoutouts. The amusing thing is one of the few sound effects will hear is their self-censorship of the phrase “What the Fuck,” which is also the name of three previously unreleased songs on the CD. Here’s an excerpt from #2, which was culled from the recording sessions for “Buhloone Mindstate”:

Wait a minute – you’re thinking this can’t be a De La track right? This shit doesn’t make any sense.THAT WAS THE WHOLE IDEA – it was a song they purposefully recorded to confuse the hell out of Tommy Boy Records and make them think the group was off their rockers. Hearing this explained on “Impossible Mission” is hilarious, and listening to it is even moreso, but there’s plenty of shit here that makes perfect sense, like the Supa Dave West produced soulful epic “Respect”:

Dave: “Hey yo I’m proud to be black y’all, wish I could bring Jay back
DJ put the needle to the haystack
Pump beats like eighty-six pumped crack
Raise the heat for the summer, we Fahrenheit
Banners like cash on your corner, papered and OD
Make your girl wanna shake in front of little ol’ me
Even when I’m rock bottom still the most poppin
Hold crops like John on the farm, then Johnny your Fox
Boxcutter clean cut stem from the PA
Not your everday outcast, we outlast
Used to bust a tommy gun, now I blast off with a check
Might as well, I done earned the respect”

Pos: “Here to jumpstart the art again, the sparkplug W-O-N
I trouble your whole squad again
In a class by myself, so selfish in my ways
Shave my head bald, I’m too fly for tou-pes
Ain’t nuttin sweet yet, never actin bitter
Shut your spitter small fry, you too dry to wet me
And if you could, you think I’d really let you?
In and out the hood I get much respect DUE”

With twenty listed tracks of dopeness and an unlisted twenty-first as a bonus, “Impossible Mission” is not only one hell of a hip-hop album but a must have for any long-time De La Soul fan; the problem in either case will be FINDING IT. Make sure to check online vendors, because it pays to be aware of the options to get this one where and when there are no retail ones available. It ain’t easy being a De La Soul but sometimes being a devotee can be harder still, but trust that this one is worth the effort.