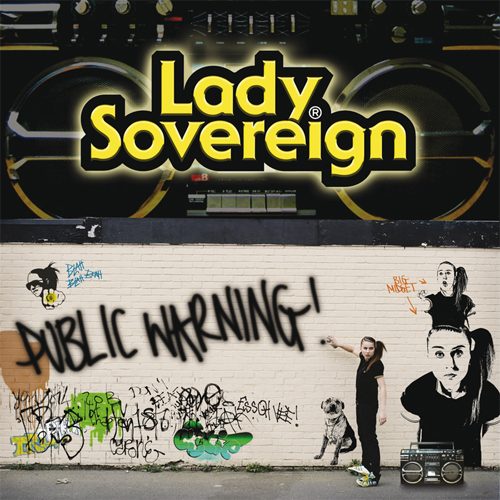 Bold words for a brand new artist. Of course being bold is what hip-hop has always been about, so Lady Sovereign should have no trouble fitting in… except for the fact she’s white, short, and British. Well now, that’s pretty much the INVERSE of what you’d expect a hip-hop artist spitting the opening stanza’s words to be. When Pedro Hernandez reviewed her limited release “Vertically Challenged” EP he described Sovereign this way: “Her accent coupled with her relatively fast flow actually make her style more akin to dancehall reggae than rap.” True dat. The title of her full-length debut “Public Warning” is therefore apt in more ways than one; it serves notice that her accent may be a challenge to some while her brash and unladylike behaviour will be to everybody else. Her lead single “Love Me or Hate Me” sums this up nicely:

“I’m fat, I need a diet, no in fact I’m just too light
And I ain’t got the biggest breasteses, but I write all the best disses
(Cha-ching!) I got hairy armpits, but I don’t walk around like this
I wear a big baggy t-shirt that hides that nasty shit (yeah)
Ewww! Never had my nails done
Bite them down until they’re numb
I’m the one with the non-existent bum
Now I don’t really give a – EWWW!”

Thanks to a pounding beat produced by Dr. Luke and perhaps in part to the sheer novelty of Lady Sovereign as an MC, “Love Me or Hate Me” has skyrocketed in pop music even though the vast part of a hardcore rap audience may want nothing to do with her. While it’s hard not to look at Lady Sovereign with a raised eyebrow and wonder if it’s just shtick, it would be foolish to deny the girl’s got a nasty flow and nasty lyrics to go with it. The Jamaican influences are apparent with her accent and the heavy riddim of the Menta produced “Gatheration”:

“It’s like bottles smashin, people clashin
Unnecessary drunken feuds, it’s fashion
Clean up that spilled drink or you ain’t crashin
My bed’s out of bounds so strictly no lashin
Where’s my debit card, nobody move
You ain’t gettin out of this room, until I prove
that you didn’t take it and I misplaced it
Now get out my chair, I wanna check face-pic
All these feisty chicks, I gotta face it
Even on a Friday evening when I’m wasted
You see this life well you’re never gonna taste it
I don’t, associate with waste kids”

Lady Sovereign also has a taste for electronic sounds that have more in common with techno or trance than they do traditional rap boom-bap. That of course helps account for some of her crossover success in the U.S. as a dancefloor audience is less likely to judge an artist on “keeping it real” than whether or not they can really keep your feet moving. Medasyn comes through on this tip with the damn near crunk attack of “A Little Bit of Shhh” and the pulsing “Tango,” while Menta comes with a song that’s all beat and no melody whatsoever on “Random”:

“Let’s… get started
Move ya arms round like fucked up karate
Ohh, shit! My word play’s nasty
Ohh, shit! Don’t put it past me
Move, titch – get out the… way
Now e-nough of dat, I’m here to, stayyyy
Flow lazy
Pick the pace up when I flow less hazy
J-Lo’s got a batty
Well you can’t see mine cause I wear my trousers baggy
Anyways; yeah, let’s… commence…”

If you’ve never watched any British comedies (Monty Python) or science fiction (Doctor Who) or movies (The Italian Job) you may have a hard time grasping what Lady Sovereign sounds like. A comporable experience would be trying to explain to someone in Europe who’s never heard Nelly that they can’t HURR the difference by explanation alone. If you’re going to make a decision about whether or not you’d like Sov you may want to sample a few of her tracks on iTunes first. What DOES come across though is how much Lady Sovereign wants to disassociate herself from the stereotype Brits are austere, serene and dignified. Sov’s “My England” explains this perfectly: “It ain’t about tea and biscuits/I’m one of those english misfits/I don’t drink tea I drink spirits/and there’s a lot of slang in my lyrics.” Despite the huge cultural gap between her and an American hip-hop audience, that’s one thing everybody can relate to – being who you are and not who everybody expects you to be.

“Public Warning” is going to be an easy sell to a Total Request Live audience, and a much harder sell to a 106 & Park one. Sov may be trying to cater to both by having a Missy Elliott remix of “Love Me or Hate Me” on the album, but a Missy remix means far less in 2006 than it would have in 1996. By the end of “Public Warning” though you’re convinced that Lady Sovereign is not just Posh Spice attempting to be a rap star but a real MC who practices self-deprecating humour yet still wants you to find her dope as fuck. At times Sovereign exceeds at being entertaining and at other times her simplistic lyrics, heavy accent and electronic beats prove to be too much to grasp. It’s safe to say though that whether listening to her on record or hanging out with her at a party Lady Sovereign never has a dull moment, which in today’s market may be all she needs to succeed.