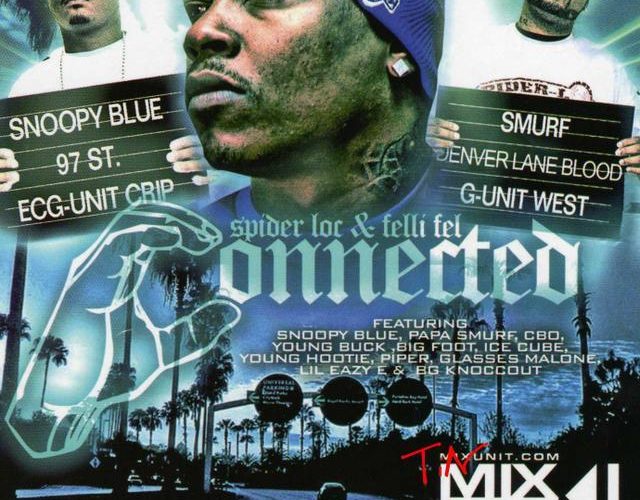 You know I’d be lying if I said I was overwhelmed with desire to review this album. MixUnit releases come so frequently these days they’re almost a dime a dozen and more is not necessarily better. I don’t mind a quasi-legit mix from a known rap celebrity like 50 or The Game, or a showcase album by an up-and-coming underground artist like Papoose, but I really feel like shit’s getting watered down when I’m getting CD’s in the mail from Spider Loc & Felli Fel.

Now first off several press releases claim he’s a FORMER 97th Street Crip. I’ve never heard of a Blood or Crip being “former” in any way – in jail or dead you’re still in your set no matter what. Snoop Dogg’s repeated insistance on Crippin’ it up more and not less on his recent albums seems to be the proof in the pudding. I’m not hard and I don’t pretend to roll like I’m hard, so I don’t expect Spider Loc to pretend he’sNOT particularly when he’s blue’d out on the cover insert and raps with guys named “Snoopy Blue” and “Papa Smurf.” That’s my second problem – does it ever occur to anybody that calling yourself “Papa Smurf” just because you want to emphasize how Crip you are doesn’t sound hard at all? For all of the deadly seriousness they proclaim about their street life, that’s just motherfuckin’ silly. I sometimes think the Crips in hip-hop must resent the gallons of fluid inside their own arteries – don’t you think some of them would pump the blood out, dye it blue and pump it back in if it weren’t lethal to do so? Let’s keep the Crippin’ to at least reasonably believable levels.

Third like so many street discs before it, the track listings on “Connected” are a confusing mess. 21 tracks are listed but only 20 are on the shit, so shit’s definitely out of sync. And like so many other mixes, this one is predicated on having everybody in the posse get in so on the slim chance that it really blows up they all get a bigger name for themselves. Spider Loc just by himself might be interesting to hear since he has done some good underground tracks with G-Unit as well as a few notable video game cuts like “Maybe We Crazy” for 50 Cent: Bulletproof and “When I Get Angry” for Madden 2006. Your chances of hearing Spider by himself are slim and none though, and Shady isn’t even in the building. Has anybody cared about BG Knocc Out since he rapped with Eazy on “Real Muthaphuckkin G’s?” No. And he’s the biggest name of the bunch other than Young Buck, as you’ve got an album full of no-names like Glasses Malone, Young Hootie and Big Foot to deal with. In fact despite being co-billed and probably producing a lot of these uncredited tracks, it’s hard to know what Felli Fel did for this CD at all other than providing a limited amount of name recognition as an L.A. hip-hop radio icon. Nobody outside Southern California is going to know or understand that.

“Connected” is clearly an album with a very narrow appeal to a very specific audience, but within that tiny slice there are some tracks that are still nice. Spider’s style shines on tracks like “I Know Ridaz,” shines with C-Bo and Young Buck on the fake gangbanger warning “Not a Dance,” and it is fun to hear some of the songs they rap on just for the classic instrumentals they use like “New York, New York” and old school R&B that gets laced up for songs like “First Degree.” The problem here is that Spider Loc really is a talented cat, but he’s so focused on his gangster background and puttin’ on every single homey from the hood that what’s really hood ain’t really good at all. Spider Loc needs three things to do him justice – an album without 20 billion people stealing his spotlight, a heavy de-emphasis on his gang affiliations, and a professionally produced album with a full jacket and liner notes on G-Unit/Interscope in stores nationwide. You’ll get just a taste of what he has to offer on “Connected” but it’s not enough to justify the purchase price.