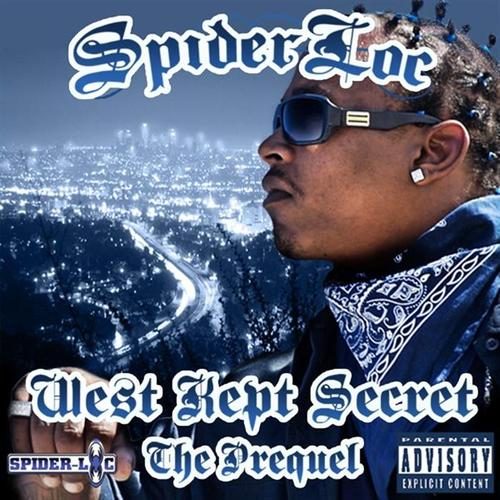 Since when did September 11th become such a popular album release date? Jumping on the bandwagon alongside Kanye West and 50 Cent’s releases last month, G-Unit’s newest member, Spider Loc, also released his anticipated prequel album “West Kept Secret: The Prequel” on his independent label BAYMAAC through RBC Records and Koch.

Appropriately subtitled “The Prequel,” “West Kept Secret” sets the initial tone and fan base for Spider Loc as he will soon debut with an imminent release on G-Unit’s label expected to drop in the near future. Fortunately for Spider Loc, his aptitude and flair were sought after while being invited by Young Buck to his “Shorty Wanna Ride” video shoot in Los Angeles. With 50 Cent also present at the shoot, Spider Loc spit a few rhymes for him as he was quickly taken back by his capacity as an emcee and signed Spider Loc to the infamous G-Unit label. Amongst the fifty affiliates of the G-Unit assemblage, Spider Loc is the sole member hailing from Los Angeles and has been featured on 50 Cent’s “Get Rich or Die Tryin'” soundtrack and Tony Yayo’s “Thoughts of a Predicate Felon.”

The first single off of Spider Loc’s “West Kept Secret,” “Blutiful World” featuring E-Note, makes the clear suggestion and pays homage to the surrounding world of blueâ€¦Crip blue if you haven’t gotten the message quite yet. With its eerie, yet peculiar rendition of the “Mr. Roger’s Neighborhood” theme for the introduction, a voice announces, “It’s a blutiful day in my neighborhood” and sets the tone for Spider Loc’s raw verses to come. In a creative way, his wordplay incorporates anything and everything associated the color blue and his way of life as he says:

“Got a blutiful glow from that blue ice
Crackin’ crack game nice with them blue dice
Light the blunt with the torch and the flame blue
I’m in the fast lane gettin’ my brains blew
Blue kicks look good with the blue fit
I keep a blue choke chain on my blue pit
Stuff a dub worth a buds in a blue bag
Jumping out the blue jag with a blue rag
Blue belts, blue hats, blue coats
Don’t sing, but I do hum blue notes
Highs a tight all night off of blue dolphin
When I go, lay me in a blue coffin”

At the end of the album, the more lively tone and hard hitting bass in the remix of “Blutiful World” features Papa Smurf and Piper. As new lyrics are introduced, the main focus isn’t just on everything blue, but now also includes the beauty of all things purple, if you know what I mean. This remix was a nice touch to add some variety to the scheme of things.

Ice Cube makes his presence known on “Big Blacc Boots,” as he accompanies Spider Loc on yet another track about gang life and intertwining the old school with the new school. With the commencement into the G-Unit clan in the back of his head and knowing what Ice Cube has amounted to, Spider Loc makes reference to what he has to live up to in the rap game as he says, “Cube says it’s on me to take care of the coast.” It seems as though representing for G-Unit on the westside is just the beginning.

Considering his tough life amidst gang violence and hostility in the streets of Los Angeles, Spider Loc reveals the realities of surviving and hustling in “All I Know” as he reassures himself that “they can’t do what I do.” The hypnotizing vocals from E-Note add to the menacing approach to the track in showing the realism of it all. With its fluid sounds of strings and horns, “Look at Me” features E-Note once again as Spider Loc compares himself to the everyone else in the rap game that can never come close to his talents as he professes:

Also, with a mixture of high pitched and deep synthesized sounds Spider Loc on “Close to the Edge” shows the path of testing fate in the hood while engulfed in the “ride or die” lifestyle.

Showing his gang life in a different perspective in “Cry and Cry” featuring L.O.V.E. on the vocals, Spider Loc puts his lyricism to the test by justifying the thin line between love and the streets. As if he were speaking to his lady, Spider Loc conveys his loyalty to the hood and how he can’t change regardless of the tears she sheds. The reality of it all is that it is inevitable that they will never see “eye to eye.” On the subject of ladies, Spider Loc keeps it lighthearted while making it known that he fancies the ladies and shows what he is keen on finding in a female in “I Like.”

Spider Loc’s “West Kept Secret: The Prequel” has provided a glimpse to fellow G-Unit comrades and fans alike into his own capacity as an artist. The rawness and candid life situations portrayed in his lyricism is nothing but true to the west coast and has publicized his dedication to his artistry. Now backed by the G-Unit name, he has a great deal to live up to and in doing so, has shown his strengths in wordplay, but lack in delivery for the most part. As I think I speak for the masses, my curiosity has only increased with this prequel in wondering what is in store for the future of the westside G-Unit connection. With the demands of a flawless album on G-Unit’s time, the question is will he will deliver the next time around?