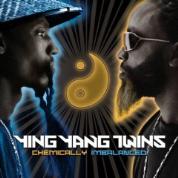 The forces of Yin and Yang are often mistakenly described as a balance between supposed absolute opposites like day and night, but this is a Western interpretation. The more accurate philosophy would be that day cannot exist without night and night cannot exist without day, because each has the element of the other within it and can become that which it is supposedly opposite of. When you perfect that form of thinking it’s a philosophy that can be applied to anything rationally – there is no wrong without right, there is no black without white, so on and so forth. That’s TRUE balance as described in Chinese philosophy – a harmonious balance which is not opposites offsetting each other but mutually opposed forces which exist in harmony WITH each other.

For that reason I’ve always found the music of the Ying Yang Twins slightly perplexing. While it’s clear their name is meant to reference the philosophy, particularly given that their new album has the Taijitu swirl of Yin and Yang on the cover, the title “Chemically Imbalanced” exemplifies the dichotomy between their name and their intent. Ying Yang Twins music has a track record of being WAY out of balance to begin with – albums withgood beats and shitty rhymes tend to be the rule and not the exception. Unfortunately it’s stylistically impossible for D-Roc and Kaine to achieve that balance – with all due respect they are not good rappers. The lyrics they pen are at best simplistic and at worst insulting and they rely almost exclusively on big beats and big guests to get over. “Dangerous,” produced by and starring Wyclef Jean, is an ideal example. Read for yourself:

Ying Yang: “I ain’t really tryin to let you in
But you can spend yo’ Benjamins
Make no mistake of thankin she yo’ friend
This is all about dividends
Wait, she like to play games
And she don’t care who she play wit
She do what she do
And she gon’ get what she gon’ get”

Quite honestly by the time Wyclef gets around to paraphrasing “Maneater” as he sings the chorus, it’s something of a relief. Ying Yang Twins lyrics are monotonously uninteresting time and time again, repeating the same concepts over and over. Is there that much difference between “First Booty on Duty” and “Jigglin”? No, not really. You can either drink some “Big Boy Liquor” or get drunk at the club on “Friday.” Their rhymes at time scream of desperation: “It’s Friday, it’s payday, everythang gon’ go my way-day.” Way-day? C’mon. The saving grace of this album is the production. Mr. ColliPark designs some definite eardrum thumping trunk rattling tracks like the fat dirty horns of “Keep on Coming,” the club friendly Bubba Sparxxx and Lil’ Jon influenced “Jack it Up,” and the futuristic “Open.” Wyclef and his partner-in-crime Jerry Wonda produce a surprising amount of the rest, but it’s no surprise they do such a good job. Unlike the Twins, Wyclef long ago found a balance between making party music and making music from the soul.

Unfortunately the album lives up to the title because the Ying Yang Twins are definitely “Chemically Imbalanced,” and not necessarily because they smoke a lot of weed and drink a lot of Patron. The Ying Yang Twins have succeeded largely because their lyrics are so dumbed down and their beats are so loud and energetic, but take away those beats and the Twins would have nothing left. They don’t have any distinctive style or personality to their writtens or their vocal delivery, so they are heavily overbalanced on music and completely out of whack if you pay attention to the tracks. If the heavy beats were taken off the scales the shift in balance would be so great Ying Yang Twins would go flying off into space. I don’t think it’s possible for them to achieve the harmony their name implies, because then their beats would have to be as bad as their raps, at which point there would be no point buying a Ying Yang Twins album at all. For mindless cruising or club booty shaking “Chemically Imbalanced” is perfect, but it’s ultimately it’s cotton candy – sweet at first but thin as air, quick to melt away, wholly unsatisfying and bound to rot your teeth – only the dangerous chemical imbalance of their dumb lyrics might just rot your brain.