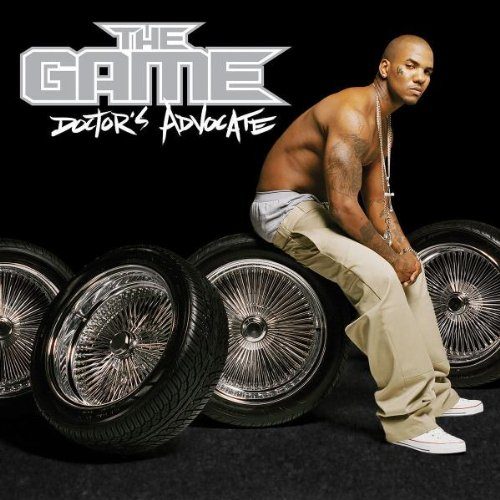 EDITOR’S NOTE: Don’t forget to check out
our exclusive interview with The Game here.

“I’m the Doctor’s, Advocate, nigga Dre shot ya
Brought me back from the dead
that’s why they call him the Doctor
The ‘Math gon’ drop him, and 50 ain’t rockin with him no more
It’s okayyyyyy! I get it poppin
Whole club rockin like a six-four Impala
Drink Cris’, throw it up, call the shit hydraulics
Then piss in a cup, call the shit Hypnotiq
I bleed Compton, spit crack and shit chronic”

Jayceon Terell Taylor, perhaps more than any rapper to walk on the planet since the late great Tupac Amaru Shakur, is the epitome of the commonly used phrase “Controversy Creates Cash.” In fact Taylor, better known to his fans as The Game, gets involved in so much drama that some people have even suggested that it’s all just one big marketing ploy. Sometimes it’s obvious that The Game is just a man who gets in fights a lot because he’s arrogant about his skills and has enough success in the rap world to back up that belief, much like the beleaguered Terrell Owens of NFL fame. When you walk around like you’re the shit sooner or later people take shots at you, and everybody from Joe Budden to Yukmouth to Ras Kass has had a chance. Sometimes his intentions are more self-evident, such as releasing sarcastic mixtapes with titles like “Stop Snitchin, Stop Lyin” to mock former G-Unit labelmate 50 Cent along with his street credibility. The feelings of hostility over his very public departure from the crew are genuine, but stirring up the pot with a movement called “G-Unot” definitely hasn’t hurt him in the publicity department. Whether it’s all real or Taylor is just “working” the public to keep his name in the spotlight, he’s certainly gotten his name into the mainstream in an almost unprecedented way.

Titling this new album “Doctor’s Advocate” seems guaranteed to keep stirring the hip-hop pot even as it threatens to boil over. It’s an entirely blatant reference to producer and label impresario Dr. Dre, although the reasons why could touch on a dozen different topics. The most obvious would be Dre’s ties to his enemy 50, although on the lead single “It’s Okay (One Blood)” quoted above he claims there’s no beef any more with the words “I ain’t got beef with 50/no beef with Jay/What’s beef when you gettin head in the six-trey?” Well sure anybody would be happy to get oral from a supermodel in a ’63 Impala, but that doesn’t change who you’re mad at. It could also be that The Game feels Dr. Dre is not loyal to his N.W.A. and Compton heritage, a lineage The Game tried to directly reference on his debut “The Document” with the original scrapped title “Nigga Witta Attitude Volume 1.” Dre is credited on a large amount of production for that album including the singles “Westside Story” and “How We Do,” but obviously for political reasons it would be hard for Dre to produce tracks for Game now that he’s not under the G-Unit/Aftermath umbrella. Still it seems Game respects Dre as a West coast pioneer despite the whole G-Unit split, and he does thank Dre in the album’s liner notes. It seems likely in the end that the references throughout and head-scratching title are The Game again showing his marketing savvy – he knows how to get people talking.

What they should really be talking about though is the lyrics and music of “Doctor’s Advocate.” Despite the lack of involvement from “The Doc” this go around the quality of The Game’s beats has not suffered. In fact if anything producer Reefa has singlehandedly put his name on the map with the track for “It’s Okay (One Blood),” which will go down not only as one of 2006’s most memorable tracks but as a certified classic for generations. The pulsating bassline, the echoing Junior Reid samples, the repeating drums like rapid fire machineguns and subtle melody which blends the breakdowns together are all combined together into an incredibly FIYAH track that’s equal parts reggae, West coast gangsta rap and Dirty South. Production jumps off right from the start though with the Ervin ‘ER’ Pope laced “Lookin at You,” where The Game sounds eeriely like a clone of Dr. Dre as he spits his shit:

“Guess who’s back on the West coast tracks
It’s the motherfuckin messiah of gangsta rap
Still dip in the six-fo’, still puffin on the same chronic
Haters mad cause I still got it
I never fall off, even without the Doc
You niggaz sellin your soul tryin to stay on top
Bitch nigga check your Kotex, you niggaz ain’t movin shit
like the hand on a fake-ass Rolex”

There’s a wide variety of producers chipping in to create different beats, but even among the variance they all come with sounds that are tailor-made for Game. DJ Khalil creates a beat that’s simultaneously light and floating yet heavy and deadly on “Da Shit,” weaving together elements as diverse as “Ipecac” and “Tales From the Hood” into a coheisve whole. Scott Storch kills the piano keys on “Let’s Ride” while Game brags that other rappers are “so far behind they can taste my rims” and that he “fucks a different bitch seven days a week.” Who says they wouldn’t in his position? Hope you wore a jim hat though Game. The West coast rider didn’t pass up a chance to work with Kanye West again after they collaborated on the successful “Dreams” last time out, so the duo come with the dope on “Wouldn’t Get Far,” although this time Kanyeezy adds a verse over his beats and the “I’d Find You Anywhere” samples. Game links up with Swizz Beatz for the first time for a track he dubs “that disrespectful/motherfuckin West coast/hip-hop death blow” on the energetic “Scream on Em,” but Game changes up for to subtle and somber over Jonathan ‘J.R.’ Rotem’s dark title track, where he fully illuminates his feelings about the whole Dre situation:

“Dre, I ain’t mean to turn my back on you
But I’m a man and sometimes a man do what he gotta do
Remember, I’m from Compton too
I saw you and Eazy and them so I started wearin khaki suits
I was twelve smokin +Chronic+ in ninety-two
I had a choice – be like Mike, or be like you
I made a choice and now it’s be Crip or be Piru
Whatever I was, I was bangin +Gin & Juice+”

Even though the song features a guest appearance from Busta Rhymes, he simply can’t steal Game’s shine here. That’s true of any cameo on the CD really, from Snoop Dogg and Xzibit appearing on “California Vacation” to Nate Dogg’s crooning on “Too Much” to rapping with Nas on the album’s outstanding Just Blaze produced finale “Why You Hate the Game.” Curiously the guest artists aren’t even credited on the album’s outer shell, only within the actual liner notes that accompany it, but when listening to “Doctor’s Advocate” this doesn’t feel disrespectful in any way – just simple acknowledgement that it’s his show and they are being allowed to enhance it while recognizing he’s still center stage. Speaking of respect AND speaking of Just Blaze, “Remedy” may stir up some talk among hip-hop heads for a very familiar piano beat that first made hip-hop history when set to the words “I got a letter from the government, the other day.” Since DJ Muggs already reused that Isaac Hayes “Hyperbolicsyllablicsequedalmistic” sample on the “Puppet Master” track starring B-Real and Dr. Dre, one can hardly complain about Just Blaze doing the same. Frankly the sample hasn’t been NEARLY as overdone as “Between the Sheets,” use it a few more times, cause those are some funky-ass ivories. Of course speculation will run rampant again – was Game trying to send a message to Dre by rapping over the same beat he did? Speculate if you like but this song is clearly meant as a tribute to “Black Steel” – then again he does throw in enough references to keep you guessing:

“I’m known for makin bitches take they clothes off
Long as I’m from Compton, California I could never go soft
I’m hard as a motherfuckin ounce of raw
Dribble rock like Kobe Bryant bounce the ball
Fuck the law!! Feedin my son is a must
Whip it soft, whip it hard, in crack we trust
Why Andrew Jackson look high as fuck on the 20, G answer
Cocaine been around for centuries
Since I’m young, black and rich, I’m the +Public Enemy+
Ridin the bass drum, Just Blaze got the +Remedy+
[…]
Now that ‘Pac passed, tryin to put us on Death Row
Get ready for the Aftermath
I run through the city like Godzilla
Doin mo’ damage than Ice-T when he dropped +Cop Killer+
Pull a shotty out the trunk of the Chevy
There go another victim of a one-eight-seven”

The Game shows lyrical improvement over his major label debut, and even though some accused him of being a “name dropper” back then and still will today, the references seem more in keeping with his “soldier of the West” philosophy and less like a filler for lack of content. In some ways though the parallels one finds to Tupac Shakur are downright eerie. The Game embraces his thug persona in a recklessly nihilistic “fuck you” fashion, gets in fights constantly, and has now recently gotten into acting with films like “Waist Deep” and presumably more to come. It’s possible that The Game may stir up so much controversy that he either wears out his welcome or meets with an unfortunate and untimely demise, because the candle that burns the brightest may also burn out the quickest. Nonetheless on “Doctor’s Advocate” The Game is burning brighter than ever and ably proving he doesn’t need G-Unit, 50 Cent or Dr. Dre to keep his status as one of rap’s baddest. He is absolutely quintessentially relentlessly and unapologetically thugging it up on this CD, but unless your name is Joe Lieberman or Tipper Gore you’re gonna enjoy the hell out of the dope beats and lyrical bravado and be begging for more. This album isn’t politically correct in any way whatsoever, but it’s FUN. Hopefully one day he and the Doctor will squash the beef and do another one; that is if there even is a beef at all. You never know.