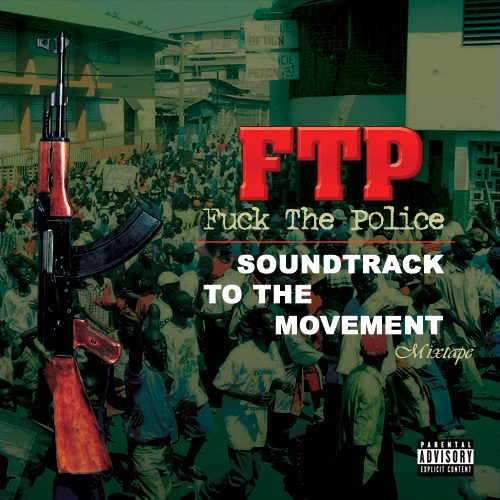 Fuck the Police :: Soundtrack to the Movement

It’s not like this hasn’t been done before. Mobs. AK’s. Revolution. Hating on the 5-0. All commonplace motifs in hip-hop, and have been since who can remember. Dissing the boys in blue might be as routine in the rap world as pot leaves and Jesus chains, so Fuck The Police are certainly plodding down a well-beaten path. Forgive their straightforwardness; the name is perfectly representative of their insubordination, though it doesn’t say it all.

If “Soundtrack to the Movement” dropped in ’98, FTP might be on the same tongues Dead Prez are today. All the parts are in place: they hate the government, hate the police, hate America, and definitely aren’t down with whites (“fuck the white house, we wanna black house!”). But the revolution they advertise, much like Dead Prez,’ is about 99% blind hatred. One listen through, and it’s pretty cut and dry; their message is a close-minded one. Pretending to be down for a particular cause, they are clearly absent of one. Whatever happened along the way to spark the totally irrational (“put a flame to that red, white and blue shit”) is never, ever, justified along the way.

Pause. Take it back to ’87, when “Fuck the Police” the song was more than a hood anthem. It was revolutionary, and to that there can be no argument. NWA had their radical stances, of which they surely believed in, but the state of mind was equally if not more important than the lyrics or the beats. Hip-hop was still developing its first of many identities, and Dre and co. represented the nonconformist point of view that essentially shaped all forms of hip-hop. With south central LA in constant disorder, and their police department a purportedly jaded group, NWA rose to prominence through turmoil. In the end, watching your mans get beaten on video is, by my book, reason enough to at least get a little huffy.

Fast forward to ’06, and no such atrocities headline the 7:00 news. Yet, FTP, who scrapped together 200$ for studio rent money, are spearheading a movement? And here I sit through this nonsense, samples inquiring, “what are the police good for?” and the like. Let us appreciate how disgustingly rhetorical that is. That’s dumber than “fuck the police” could ever be. There’s more sense in the word “pig.” You can hate on the fuzz all the livelong day if you like, but would you ever really wish them gone?

If ANYBODY would, it’d be FTP. Every song on “Soundtrack to the Movement” is admittedly that – the perfect backdrop to anyone contemplating nonsensically hostile behavior. In their violent imaginations, they run a “Blackhouse,” “Put a Flame” to the flag, “Stay Black and Fight,” and receive their “Reparations in Blood.” Cities burn. People die. They don’t ask, they take. This is, of course, until they see a “change.” It is to what, precisely, that remains unknown.

“Good Woman” is the eye of the storm for sure. Beside dainty keys and elegant soul samples, FTP direct a very positive light towards females. It’s the equivalent to a Huggies commercial during a Tarentino flick. It is at this point Fuck The Police have a schizophrenic change of heart. “Free Yourselves” sets itself up for more aggression, but refrains, steps back, and admits to placing value in a more peaceful means of empowerment. At 2:03, that message is as brief as it is two-faced. Before long, they’re right back in the grind, hatin’ without deliberatin.’

FTP’s message is frightening. They advocate a hellish revolution with no regard, in the form of an album that’s extremely unimaginative, unentertaining, uninspiring – it’s just plain un. Above all else, it’s unbelievably and unequally ignorant. Probably the most telling of any lyric on the album appears on the very first song: “that from which we came is to blame.” Do FTP recognize their ignorance? Are they pointing the finger at the forefathers, the NWA’s and Ice T’s of young hip-hop, for creating a monster?

To top it all off, the fantastic Malcolm X excerpts hardly belong. This was a man who fought for freedom when there really was a war. FTP don’t covet what they already have, and they don’t pretend to. They’d rather serve up a cold dish, if I may. Over awkward, crunked-out beats, “Soundtrack to the Movement” is hard to swallow. You might not even get it down.