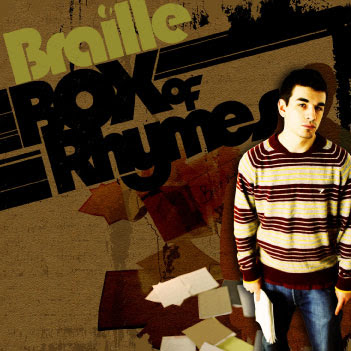 Braille has a hard job in the rap game. With a genre of music that is becoming more about escape and fantasy, it’s difficult to pitch a CD from a guy who’s living a regular life. While every young gun is bragging about the millions of kilos they’ve moved and bodies they’ve buried, Braille revels in the joy of being a husband, father, and finding Christ. As much as I love Scarface I really have no dreams of participating in the cut throat world of slangin’ dope, yet at the same time I’m in no rush to experience the thrills of marriage or fatherhood. But despite no wishes to actually deal drugs, I can enjoy both the extraordinary and reflective aspects of cocaine raps. With Braille though, is there anything I can gain out of his experience?

Braille answers any questions one may have about the universal nature of his music right off the bat. “Box of Rhymes” is full of relevant songs that anyone could relate too. Though he doesn’t live an exciting lifestyle (at least comparatively, since being a rapper would be exciting to many), Braille still finds a way to make his music worth peeping thanks to his insightful nature. “Pour It Out” finds Braille releasing all his thoughts and regrets about a variety of things, from missing home to being homeless. His honesty is commendable, but it’s the approach that makes the track stand out since it captures a side of life that we all experience at some point. “I Wouldn’t Do It” is a track that reflects Braille’s refusal to compromise his morals or beliefs regardless of the pay off. At times the track sounds too much like the “I won’t sell out and go commercial” whining that a lot of underground rappers make, but Braille and the guest rappers throw in enough social commentary to make it good. “Humility” is almost an unnecessary song as it’s hard to imagine a guy like Braille not being humble, but still he makes a relevant track about not taking things for granted. “Leave Behind” is religious track where Braille focuses on doing good while you’re alive so you’ll have no doubts about your faith afterwards. It’s a track that may alienate those who don’t believe in the after life, but even if you can’t relate directly you can feel the emotion and passion Braille expresses.

The only real complaint on “Box of Rhymes” is the fact that he can be too serious too much of the time. He does switch things up occasionally on tracks like “Box of Rhymes,” “Fresh Coast,” and “Evacuate,” but overall the album is a bit too much on the heavy side. The same can be said on the beats as they all maintain a very high level of quality but can be too much on the organic and soulful tip. To some the heavy sampling and boom-bap drums are right up their alley, but I would have preferred some more variety.

Braille manages to make a dope rap album despite several things going against him. I’ve criticized non-secular music in the past because I think that focusing on any one thing too much, whether it be god or anything else, limits the success of music. Braille makes music that has heavy religious tones but does not focus specifically on it. Because of this balance Braille is able to make music that has the same message that Christian rap tries to convey but that is more universally appealing. On top of that he gets dope beats from popular underground producers like Ohmega Watts and Stro of The Procussions, which also helps elevate his music above your usual Christian rap offerings. With that said, “Box of Rhymes” is not a Christian rap album. It’s an album by a guy who is going through life and trying to leave a mark on the world. He has a positive message and one which will leave a positive mark on the world once more people listen.