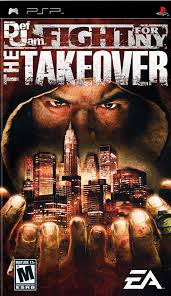 Def Jam Vendetta was a hit in our house. In fact the game was so popular that during one particularly boring PPV we put the TV on split screen and turned on the Cube just to see if my homeboy Chad could outwrestle the game’s final Suge Knight-like boss, which he did to an eruption of cheers all around. That night the video game which cost nothing was more interesting to watch than the show I had paid for – we could have just ordered pizza and watched Vendetta from start to finish instead. About half a year ago I downloaded a trailer with my PSP for what seemed to be a sequel to the game, which largely featured Redman recording dialogue for his character in comically over-the-top fashion. His most memorable line was, “I’MA RIP YA TONGUE OUT POTNAH, AND WIPE MY ASS WITH IT.” Anyway this seemed like a no lose proposition – a sequel to a game I already loved, in a portable format you can play at any time without the need for a console and a TV. Why didn’t I buy it six months ago then after seeing the trailer? Quite honestly, I forgot. It probably didn’t help that I never saw the game on shelves anywhere either, but just in time for the holidays this one turned up in plain view. Hip-Hop sure has come along way in video games since the days of Toe Jam & Earl. Don’t get me wrong, they were the bomb on Genesis, but it’s nice to see something a little more RUGGED out there these days.

Rugged certainly applies to the soundtrack in “Def Jam Fight for NY,” which in a pleasant surprise you can immediately access right from the game’s main menu under Beatbox without having to unlock it first. “America’s Most” by Meth & Red, “Make it Hurt” by Busta Rhymes, “Nuff Respect” by Big Daddy Kane and “Pistol Grip Pump” by Volume 10 are a few among the many choices, and there are more to earn during the game (or you can unlock ’em with cheat codes). Obviously you wouldn’t pay three times as much as you would for a CD just to get this soundtrack, but you could enjoy listening to the music here for a long time without even playing the game. Other options on the main menu include Story, Battle, Unlock, Ad Hoc, Options, Extras and High Scores. At the game’s start only 11 of a possible 68 characters are listed as unlocked, but considering you can play as Havoc, David Banner, Redman and Xzibit in a Battle it’s not as though you’re lacking in choices. In the game’s Story mode though you’ll have to choose from one of five pre-fabricated characters or sculpt your own – no option to play through this mode as Redman I’m afraid. Once you get beyond this and picking your character’s voice you’re allowed to choose one of five fighting styles. What I can’t combine kickboxing and submissions together like an MMA fighter, I have to pick either/or? Oh well – in an ode to the original Vendetta I’ll choose wrestling.

The tutorial mode before you start is a nice bonus – it gives you the chance to get the hang of moves and combos you’ll need later on during the fights. For what it’s worth your training partner is Henry Rollins, but I have to say if they were going to pick one jacked up locking rock artist with enough credibility to look like he belongs in a fighting ring he’d be right up there with 50 Cent in terms of his physique. After that you go to the map and select where you want to be – you can even go to the tat shop if you have the in-game credit earned up and the brand you want burned on your body unlocked. That’s kind of ill son. Your best and really only choice though is to hit the streets in a place like The Heights, where you’ll be thrown into your first brawl. The plotline which is loosely thrown together and largely unimportant to the actual combat is that you were working for your uncle at a repair shop trying to earn a clean living until you made the mistake of breaking up a fight with a cop, and now his crew is sweating you so hard that you lost your job and had to take up fighting to earn a living. It’s no more or less important to know why you’re fighting than it was in Def Jam Vendetta – the ring’s the thing man. You just want to get in there and start kicking butt, and it’s not like the game is going to question you if you ignore the ancillaries and get down to giving out beatdowns. From time to time your sponsor Manny (he whose butt you saved from the cop) well send you text messages that you can read, advising you on how to proceed, and after fights your trainer will rate your performance and you’ll get feedback like “you lost but O.G. still sees promise.” Thanks for the support Dunn!

Overall even if you never played Def Jam Vendetta, you can still easily get into Fight for NY: The Takeover. It helps that this game’s engine was developed by Aki Corporation, who were responsible for the original DJV as well as some of the most popular pro wrestling games to ever appear on home consoles – a short list would include the N64 classics WWF No Mercy and WrestleMania 2000, the Ultimate Muscle title for GameCube among others. When it comes to grappling and fighting they know how to create fluid and enjoyable gameplay, so if you invest a little time learning the fight engine you’ll be scoring points and kicking ass in no time. The overall presentation lives up to the kind of hip-hop content you’d expect from a game named Def Jam, and if anything may get a little deeper into the music and culture than its predecessor. If you like fighting games and you have a PSP, it’s hard to go wrong with Def Jam Fight for NY: The Takeover.