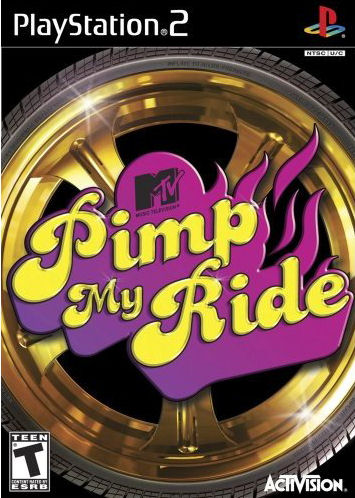 The producer’s of MTV’s Pimp My Ride couldn’t possibly be happier with the show’s success. In fact it’s such a big hit that it seems like every other cable channel in existance is trying to copy their formula and cash in. I was almost afraid the concept had jumped the shark when I was channel surfing and came across “Trick My Truck” on Country Music Television. SERIOUSLY – there’s a show for rednecks about pimped out cabs for long-haul truckers. I’ll be the first to admit you’d want a comfortable leather seat and plenty of gadgets on the interior for long hours on the interstate, but are you REALLY going to be flossing the candy paint and custom fit grill as a TRUCKER?

Clearly MTV and Xzibit needed to reclaim the concept as their own, and what better way to do that than with a video game? After all the appeal of flossing high powered fancy looking whips has already been proven by games like Midnight Club 3

, so converting the MTV formula into a Playstation 2 title should be a snap. And who better to produce this game than Activision, who have released such hits as Call of Duty, Marvel: Ultimate Alliance and Doom 3? Wait a minute, none of those are games about whips or racing. Has Activision made a game about life in the fast lane since Enduro?

Things start out on a promising note as Xzibit himself narrates the game’s introduction and explains the basic concept. You work at an auto body shop in the fictional Pimp City, with the goal of tricking out terrible rides to make customers happy, while competing with a rival group who aims to embarass you by tricking out the same vehicles you’re working on only BETTER. The familiar TV show theme kicks in and you create a new profile and save it to your memory card. After that Xzibit stands alrge in front of a sparkling skyline, with a menu giving you the choices to play, quit, view the credits or change various options. Selecting “Play” kicks Xzibit back into narrator mode again, and you’re shown a picture of your first client Marcia. She drives a truck described as a ’72 Ransacker, and while not the ugliest vehicle compared to some from the TV show’s history, it’s definitely an eyesore. By hitting right on the control pad you can scroll through other customers and vehicles to pimp, many of which are locked until you complete the earlier challenges.

It should be noted if you leave the screen on this menu long enough you’ll start to hear the game’s soundtrack backdrop, which is a pleasantly eclectic hip-hop mix starring Xzibit but also featuring the likes of Zion-I, Styles of Beyond, Japhia Life and Suni Clay. Props to both Xzibit and Activision for interjecting some unexpected creativity into this element. After selecting a profile Xzibit promises to loan you one of his rides to drive until you’ve unlocked your own by completing missions. He then shows you a Nokia Navigator (PRODUCT PLACEMENT) with a map that indicates how to get to locations involved in your mission. At this point things become a little bit GTA in play control as you drive the whip to your destination, although occasionally when there’s a large crowd the game encourages you to cruise by holding down the R1 button while hitting a series of controller buttons in the correct order to “holla” at the gawkers. Done correctly you earn a cash bonus, done wrong the crowd boos. Some of these cruising challenges actually have you GHOST RIDE THE WHIP by dancing and doing stunts outside your car while it rolls by on the street next to you. E-40 would be proud. You can’t pimp out Marcia’s car until you earn enough money to pay for parts, so you must keep driving around stuntin’ ’til your bankroll’s on swoll.

Once the cash is in hand, the Nokia Navigator lets you select the location of the customer and a green arrow (think Crazy Taxi but less useful) points you in the right direction. Actually you can use the GPS to drive to your cash missions too but I digress. On location Xzibit will do his Pimp My Ride shtick, talking to the client to find out what’s wrong with the car, while trying to ascertain from their comments what they’d really like in their pimped out whip. Mission in hand it’s back to the GPS, as the map now has icons for the various parts suppliers you need to pick up the goods to trick out their vehicle. This game feels like a series of GTA missions wrapped around the Pimp My Ride concept, but that’s not entirely a bad thing since nobody ever said GTA games weren’t fun.

That’s not to say this game is without some obvious flaws. First there’s the obviousness of the missions for parts – when given a choice you NEVER pick anything cheap or you’ll lose for sure. Second is the repetitive nature of the “ghost ride” cash earning segues, which after you’ve done them more than a few times become little more than variations of a Parappa the Rapper button sequence game minus the goofy charm of Parappa himself. Last but not least is that some people may have been misled by the cover and title of the game to think the entire focus would be getting to customize a car down to airbrushing flames on it themselves. Personally I have no art skills so this is not something I would have enjoyed but if it’s your thing “MTV’s Pimp My Ride” will not meet your expectations. On the whole this is harmless fun that most people can enjoy but some sophisticated gamers may find a little lacking; the concept gets a thumbs up but the execution could have been a little better. Now get out there with X and Pimp Some Rides.