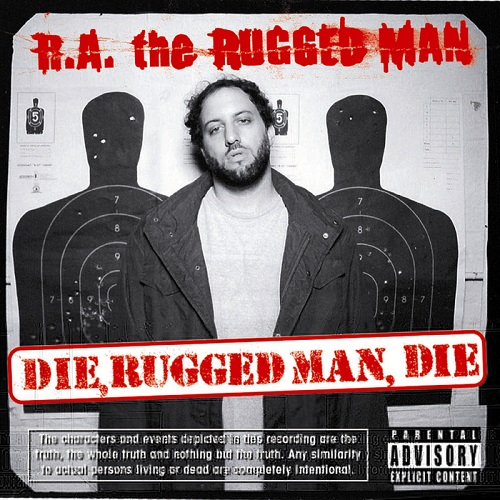 RA the Rugged Man has never followed anyone else’s rules with respect to his behavior in the music business. Stories abound regarding his unsavory conduct towards record labels, although he would be the first to tell you that they deserve it on his shelved 1994 Jive debut. RA’s feelings are summed up pretty accurately on the song “Every Record Label Sucks Dick,” an ode to getting screwed from the never-released “Night of the Bloody Apes.” His thoughts on everything are far from the norm, and this is abundantly clear throughout his catalogue. On the back cover of a 2001 single, he prints a FAQ, and in response to when his album is coming out, he responds “Who the fuck cares. I make shit when I want to. Usually when I’m broke and can’t pay rent.” How many artists would respond to that question so bluntly? Exactly one. That’s why his debut release, “Die, Rugged Man, Die,” is such an important work. And luckily for us, his bank account must have been a bit short, because it’s finally here.

RA has been through quite a lot, so it is quite relieving to see a full-length finally see the light of day. Regardless of how much of his label struggles were self-inflicted, he still is a unique voice that needs to be heard. His old-school roots are evident from the get-go on “Die, Rugged Man, Die,” as he skips the intro completely and opens with the lead single “Lessons.” The sardonically bouncy, almost playful production provides a perfect contrast to RA’s gruff vocals:

“People wondering where the fuck I been
At the VIP section, they ain’t lettin’ me in
They say maybe if you had Dr. Dre or Timbaland
They say a white boy needs a black boy to win
Uhh Bubba Sparxx did it and so did Slim
Just Blaze is hot now why don’t you get with him
I watch mad rappers bite my shit and blow up
And make millions of what I created, that’s tough luck
I first started gettin’ coverage around the same time
Steve Stoute used to carry Kid-N-Play’s luggage
I seen rappers turned from sex symbols and heart throbs
To being forgotten, now they out lookin’ for jobs”

The single acts as an introduction to the man. He offers plenty of opinions on plenty of people, and seems to have a score to settle with the entire industry. Many people claim to be innovators, but in RA’s case his frustrated words are substantiated. This is a white rapper who was being fought over by various labels at the age of eighteen, in the early nineties. It pisses him off, and rightfully so, to hear people tell him that he’s just another white rapper, and he needs to follow everyone else’s formula for success.

The disappointing “Casanova (Fly Guy)” follows, but is dragged down by a poor hook, and Giz and Cologero hook up a pretty weak beat as well. RA’s rhyming is riveting, as expected, but he can’t carry the song by himself. Things get back on track, though, with the grinding guitars of “A Star Is Born.” Ayatollah’s horn-laden “Chains,” with a slight reggae tint, puts the Rugged Man’s skills up against Killah Priest and Masta Killa, and he holds his ground well, giving the best performance on the song.

RA has a remarkably dark sense of humor, and it shines through in every word of his rhymes. He has a lisp that adds an extra layer to each verse, and you will be able to visualize him spitting on the mic in the studio. He frequently discusses the past, as on “On the Block,” a top-notch ode to the early days of rap. Even when his rapping doesn’t meet expectations, his mesmerizing delivery is something to fall back on. The one thing he can’t do is save a wack beat, like on “How Low,” when the Black Mandingos (including RA himself) are clearly trying too hard behind the boards. When the production is up to par, RA is free to explore the medium. “Midnight Thud” is the best example of that, a haunting, understated beat that allows him freedom to dominate the track.

After a disappointing concept song featuring the Timbo King, “Die, Rugged Man, Die” ends with a string of nice cuts. RA at his worst is still a sight to behold, and despite clearly being stuck on the past, his skills will maintain the listener’s interest throughout. I can’t really blame him, either, for spending much of his energy discussing the past. After all, he has been through some shit. “Da’ Girlz, They Luv Me” is a marvelous example of what happens when he is in touch with what made him popular, as he drops some truly hilarious verses. The title track is the best display of his talents, though. He is at his sick finest, and relates an amusing story involving the late B.I.G and a broken toilet. This twisted sense of humor is how he built a rep back in the day, and it’s what will hold your attention now as well.

There are times when you’ll wish he had found a better beat, but though most of the production isn’t great, it is never wack by any means. Additionally, RA spends a bit too much time talking about the past and why he is hated, instead of showing us why with his nice wordplay and disturbing jokes. Considering that it is his first official effort, though, and that he’s still at it after all these years, RA the Rugged Man has definitely still got it. To catch a true hip-hop legend at work, albeit one who is “famous for being unknown,” check Mr. Crustified Dibbs out. His debut has finally seen the light of day.