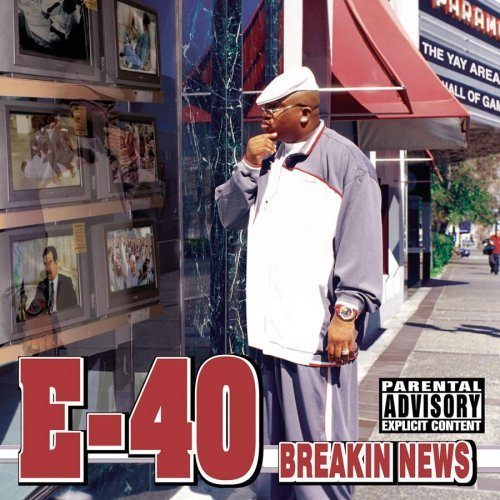 Ballatickin’. Shinin’ and timin’. A hog all about his scrilla, duckin’ the Elroys and pimpin’ like a true quarterback – ya undersmell me? That’s Earl ‘E-40’ Stevens for you, a true legend of the rap game hailing straight from the friendly confines of Vallejo, California. 40 has singlehandedly invented so much new rap slang he deserves a plaque in the rap Hall of Fame; although he’d probably rather hang it in “Tha Hall of Game” instead. He has become one of those timeless figures of rap who can release and sell an album any time he feels like it like Too $hort, KRS-One, LL Cool J and Chuck D a la Public Enemy. In 2010, he’ll still be slangulating on new albums, two steps ahead of all his competitors.

“45 second check a nigga, talkin dumb, off the liquor
Just cause I’m the game spitter, don’tcha think that I won’t split ya
cranium in half, pimp I take it to the max
Just like a lumberjack in the woods with a axe
Look at my rhymes that I wrote, look at the styles that I poked
Can’t take me too serious, can’t take me for a joke
Best thing you can do is sit back and take notes
And listen to the best kept secret on the coast” – “Married to the Ave”

A new E-40 album is like Christmas come early – you unwrap the shrinkwrap and get gifted with some of the West coast’s best new music. Tired of being the “best kept secret” though, 40-Water reached out to the world outside the West coast on last year’s “Grit & Grind” by having guests like Fabolous and Kokane on “Automatic” and Eightball and Petey Pablo on “Rep Yo City.” Critically acclaimed, the album was an artistic success but the biased East coast rap press still doesn’t mention E-40 in the same breath as Jay-Z and Nas. So the biggest baller on the block is back one mo’ gen to deliver the “Breakin News” about how he’s paid his rap dues. And just like last time, E-Figgidy-Fonzarelli is making a play for a larger audience; this time by featuring The Clipse on the single “Quarterbackin'”:

Malice: “Tell the cops don’t read into it
Them days of slangin yae been finished
Them days, have been done ended
So far gone them days that I’m offended
Snitches can’t speak my name ’til they get winded
Can’t you tell there’s been a switch made? Now fellas decide
that they wanna run and tell like in the fifth grade
But I’m too gone, young’n be clear
Even when you see me I am not really there”

Featuring a heavy ton of boom and pounding beats courtesy of EA-Ski & CMT, the song should bounce rides for the last of the top down summer just before all the leaves fall off the trees. Of course, big bass is never a surprise on an E-40 CD – he was rolling with Rick Rock long before Jigga decided to “Change the Game.” You can hear his sound on the first three tracks of the album, from the title track to “Hot” to “I Got Dat Work” featuring Turf Talk. He’s in effect after the lead single though through the song “One Night Stand” featuring DJ Kay Slay, until Kavior & Ova Dose change the pace up on the Earth, Wind & Fire laced “I Hope You Get This Kite”:

“Like Richie Rich said back in the day was true
They can take you from the game but not the game from you
Tired of bein stepped on, crept on
Waitin to get your fifteen minutes on the phone
I see you when you touch down
I see you when you come home, hold on
To all of my fellas up in jail that’s in there gettin swell
That ordered my music bought my music through music by mail
We still out here doin it we ridin Buick LeSabres
And puttin dubs on them bitches then callin ’em scrapers
I’m tryin to keep it as real as I can man
You know I came in top ten on the SoundScan
I probably woulda came in bigger
But them bootleggers and that internet shit be fuckin off a nigga”

Despite this momentary shoutout to busting piracy, most of the song is devoted to reading a letter written to a homey in jail with support like “I ain’t Cristal’d out, I still be drinkin Cooks/today I gave yo’ momma some money to put it on ya books.” It’s a heartfelt song, but E-40 is not gonna let things marinate at that level for too long. Rick Rock comes with some silly shit next that allows 40 and his guest Rankin Scroo to “Act a Ass.” The song that follows is doin’ it way big – Bone Crusher, David Banner, and Lil’ Jon all bust out over the latter’s track for “Anybody Can Get It.” Crusher’s lyrics are inane as usual, but thanks to the rest of the guests and the club smashing beat, the song still gets over. Rick Rock comes back for “Gasoline,” but you best to pronounce it “gas-o-LINE” not “gas-o-LEAN.” 40’s feeling extra mannish on this one:

“I wanna retire, but I cain’t – the game needs me
The game would be boring without E-Feeezy
I wake up every mornin to a shot of liquor
A shoebox full of herb and some grits and turkey sausage
for my liver sellin units out the trunk of my car
And just think – I started with a pickle jar
From a sixteenth of yowder to a quarter kickin blow
To a whole thing of some of that YOU KNOW!”

40 did his dirt in the past, but ultimately found that hustling tapes was as he says in the song “equa-nomically umm-err-ah-ta-uhh FEASIBLE!” That’s E-40 ya, with a “Just Say No To Drug bumper sticker on my truck […] so that I can camouflage my image, of smokin on some spinach.” It’s hella hilarious, and that’s how it should be – when he says rap would be boring without him, he’s not exaggerating. His distinctively slippery voice and up and down octave switching catch your attention, and the bright visual imagery of money as “cabbage” and weed as “spinach” make him even more distinctive than he already was. To get back on point though, the song “Show & Prove” featuring Goapele is smoothed out by Sam Bostic so that Feezy can reminisce and spit game all at the same time:

“Uhh – heavens to Merkatroid!
We go back like the video game Asteroids
You knew me when me and my boys was D-boys
Runnin from the Elroys
Flamboastin and sidin and slidin candy toys
I was doin my time
Name ringin like a, tambo-RINE
You used to see me strikin down the boulevard
Wonderin what it’d take to get off in my car
Well I thought about
And I sat back and I told myself and I said to myself
‘Hold on playa, she’s a sharp-ass broad!’
Sharp – cleaner than a clean of Lysol
Raw, tightest thing I ever saw”

No doubt, 40’s feeling this lady who’s “got my back like a car seat” and who “don’t need no makeup, ma you look good when you sleep.” Every player wants to meet a true woman like that, and Goapele sure sounds like it when she busts out the singing. E-40 never slows it down for long though, he gets right back to bumping it with the Big Smash produced “This Goes Out” that has some old school “Public Enemy #1” samples laced into it. Then there’s the all-star “Northern California” by Rick Rock, which has so many West coast all stars it’s really impossible to list them all here. The album winds down with “That’s a Good Look 4 U” laced by Nick ‘Fury’ Loftin, the tanked up liquor infested “If If Was a 5th” with the traditional beat by Bosko Money, “Wa La” featuring The Mossie and Mo Mo and an outro followed by a bonus “Quarterbackin'” remix. In total it’s 76 minutes of some funk for that ass. There’s no lacking in any of E-40’s lyrics or guests to be sure, although some of the beats seem a little less fire than the last time out. The guests handle their share well, and Rick Rock does his thang fo’ shizzle, but by comparison “Grit & Grind” seemed to have more bang for the buck. It’s far from weak though, and any time 40 spits that raw uncut from the West it’s a good time to invest. When you’re done with “Breakin News” you won’t toss it out like yesterday’s paper – you’ll want to scan through it again and again.