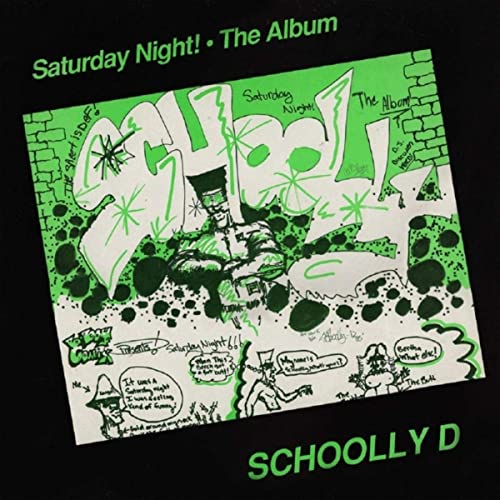 The recording of Schoolly D’s hit “Saturday Night” has been described as a happy accident. The story goes that D’s producer DJ Code Money, a self-described virtuoso of the Roland TR-909 drum machine, somehow forgot an important plug for the machine when he brought it to the studio that day. Forced to improvise and use the in-house drum machine instead, Money made a mistake while programming it and instead of a kick-snare beat, the machine generated timbales with a cowbell. The duo was so impressed with the sound that they decided to keep it, and rap fans can forever be happy that they did. The distinctive sound of “Saturday Night” burned an impression into rap fans and artists alike, making Schoolly D’s tall tales one of rap music’s most sampled tracks for decades to come.

Originally “Saturday Night! – The Album” was self-released by Schoolly D on his own label to capitalize on the single’s viral success. Jive Records was quick to realize the song and album’s potential, signing D to a deal and putting out a new version padded out with tracks he was recording for his SECOND album. “Only Schoolly D’ll make some crazy ass shit like this” brags Jessi Weaver on the seminal track, and Jah bless but there are a few reasons nobody else should. The song’s distinctive sound may have been completely unintentional, but D knew exactly what he was doing when he rapped about nearly raping a girl in his mother’s home, or being dogged out by his homeboys for hitting on a transvestite. Even for 1986 the song was controversial, which certainly didn’t hurt its success, as rap was looking for any way to shed an era of disco glam to become gangster AF. If the critics complained about the misogyny and homophobia of various rap songs, the rappers themselves laughed all the way to the bank thanks to the publicity.

Ironically enough songs like “It’s Krack” sound more like disco rap than not. The drum track, scratches and samples are all trademarks of the early 80’s, sounding more like Sugarhill Gang than Schoolly D, and perhaps that makes it a blessing he doesn’t even rap on it. This is why it would have been more accurate to call some of Schoolly D’s records “Schoolly D & DJ Code Money,” because Jessi Weaver is not even on a lot of “Schoolly D” songs on his own albums. That’s not to knock “It’s Krack” or the aptly titled “Dis Groove Is Bad,” it’s just to let you know that if you expect an album chock full of “Saturday Night” style raps, you’re not getting what you bargained for.

Although Jive Records padded out the length of “Saturday Night! – The Album” for their re-release in the 80’s, subsequent and more readily available versions have gone OVERBOARD with that philosophy. There are no less than FOUR versions of Schoolly’s “Housing the Joint” rap on modern versions of D’s work — the original take, the radio remix, an extended mix AND a “Magoomba Mix.” You can argue that’s good value for the price, but I’ll argue right back that putting radio mixes on an album from a rapper more foul mouthed than Richard Pryor or Rudy Ray Moore is pointless.

As a Schoolly D fan, despite or perhaps because of how crass he is, it pains me to tell you that the viral success of “Saturday Night” created a problem neither D nor Code Money can escape from. “Dedication to All B-Boys” encapsulates it perfectly. The instrumental sounds like an alternate take from the exact same drum machine, as though the duo decided that if one “happy accident” was good, another would be even better… and another… and ANOTHER. They kept trying to create “Saturday Night” over and over.

When they escape that formula the raps themselves can get in the way, as “B-Boy Rhyme and Riddle” illustrates. While D’s vulgar displays of power have a “shock and awe” charm at times, that charm is gone when he runs out of things to say. “Hey diddle diddle with the record like a fiddle” nursery rhyme raps aren’t going to cut it, no matter how distinctive your voice is.

As rough around the edges as “Saturday Night! – The Album” might be, it’s still one of the stronger releases in Schoolly D’s long career. Although they aren’t as well known as the titular track, songs like “Parkside 5-2” and “We Get Ill” are still fun to listen to. Even if Code Money’s production is at times repetitive, he at least enhances it and layers it with turntablism, keeping the extended breaks between D’s verses enjoyable. While “P.S.K.” and “Gucci Time” helped take him from Philadelphia phenomenon to national rap star, it was “Saturday Night” and its associated album that cemented D’s place in the rap scene for years to come. It’s also one of only two Schoolly D albums to ever chart on Billboard, so arguably this is about as good as it gets.