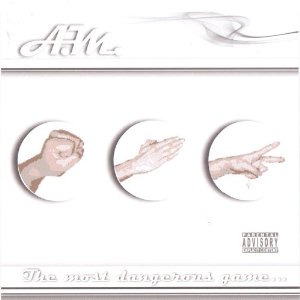 Abrasive Method :: The Most Dangerous Game

People who suffer from bipolar disorder alternate periods of extreme melancholy (depression) with spells of vibrant energy and joyous moments (hypomania). It is a mental disorder not widely recognized in society, and especially not in the hip-hop community. If you listen carefully to Detroit-based Abrasive Method’s (A.M) sophomore album “The Most Dangerous Game,” you get the feeling you are dealing with two bipolar puppies.

It is not often that you hear an album kicking off as exuberantly as this one. “You Rascal You” is not only an endearing title, but the churning Dixieland horns straight out of the roaring twenties evoke a cheerful spirit as well. The album booklet backside picture with two bearded, burly, polo-sporting white guys sitting on kegs of beer adds to that Pooh bear image. When the two MC’s open their mouth it is crystal clear we are not dealing with grandma-robbing fiends turned-lyricists here:

“I’m sorry y’all, we ain’t dead yet
I know some of y’all wished A.M. had left
But take a deep breath, let it burn in your chest
I don’t give a damn if I got your respect
I’m not supposed to have the rhythm I was given
(It ain’t right!) Rap’s Napoleon Dynamite
No street credibility – silly me!
(…)
I always keep it real, it’s hard to represent
(Take a look at) where I’m from is evident
Just another joke; egg white without the yoke
I say words like ‘bro,’ ‘dude,’ and ‘I am stoked'”

The beat these two ‘yoke-less egg whites’ rhyme over is one of the most swinging specimens I heard all (this very short) year. Louis Armstrong provides the horns, and the chorus “I will be glad when you’re dead, you rascal you” is ominously hilarious. Marco Polo, responsible for this swinging introduction, proves his worth as a versatile producer with every track he put together. It is a shame he only got to do four beats on “The Most Dangerous Game.”

Charlie Beans and Tony Franks – yes, the wordplay is as cheap as the dish – have a very sloppy way of spitting verses. Their bars are so loosely arranged over the beat that if they were prison bars, they would cave in after two well-aimed kicks by a scrawny inmate. Sometimes they rack up their syllables. Other times they stretch them out like an old accordion. It ain’t easy being a syllable in Abrasive Method’s mouths. Beans and Franks’ voices, and I am going to use that way of describing them just this once, have the chemistry of a twosome who has been rhyming together for years. They do each other’s background vocals, alternate verses, and show quite some tag team energy, no matter how much many elements they are lacking from time to time.

After “You Rascal You” a bare bass-beat kicks in with a nice synthetic backdrop, also concocted by Marco Polo. “Overdose” gives A.M. the perfect opportunity to explain why they are so abrasive in the first place. The rhyme style is more on point than on the previous track, but the content disappoints with nothing but unconvincing bragging and boasting, like a watered down version of the Los Angeles-based badass brothers that make up Lexicon.

When the last low tones of “Overdose” have faded away, the change from bragging to blubbering is sudden as a glass of cold in water in the face. “Bad Guy” deals with a unexpected break-up with a girlfriend. The expressed grief over the emotional betrayal of a beloved woman is sincere, but the contrast with the previous track is so sudden, it loses much credibility because of it. These sudden switches form a thin red line throughout the album. “I Just Wanna Drink My Beer,” gets followed up by the party anthem “Fill in the Blank.” After that depression sets in again with the contemplative and gloomy “Calendar”:

“Yep, my thirst is still here
Mind is fine, but I still feel fear
Persevere, we will shed no tear
Have respect for myself? Well, it’s been years
Swear to God, never worked harder
Schools use rules to assassinate character
Not knowing who is the enemy
If we kill them all, then we will get to where eventually”

Lyrically, “Calendar” is above the rim with some sharp observations about life’s hardships, but it gets easily upstaged by the adjacent auditory pieces. Especially “Hot Joint,” another contribution by Marco Polo, with its cranked up violins and crisp drum beats, puts some sweet in the sour mood A.M. dips the listener in. It is like they chose for a cadence of two social tracks and one sad, lonesome one.

The productions throughout this strangely bouncy emotional pattern luckily have much more consistency. The earlier mentioned Marco Polo proves he is a worthy underground producer, but Charlie Beans also certainly is not without merits on the boards. On “It Goes to Show” it appears he used some Metallica chords to crystallize melancholy. The steel drums and dusty synthesizers on “Fill in the Blank” make for a quirky but harmonious combination, even though the lyrics are rather generic and unimpressive. It shows Beans definitely should focus more on producing than on rhyming. It would help if he produced A.M.’s material entirely by himself in the future.

If these were more able MC’s, the sudden changes in mood wouldn’t be such a problem. Since both Charlie and Tony lack the skill to rise above their own and others’ production on “The Most Dangerous Game,” the mood swings are sometimes hard to stomach. Listening to A.M’s “The Dangerous Game” is like a cloudy day on the beach. Sometimes I’m basking comfortably in the warm sunshine, and sometimes I am shivering because a dark cloud blocked out the big bright ball in the sky. After a couple of these cycles I have had quite enough of the constant weather changes. Choose rain, choose sunshine, or start using uppers and downers to balance things out.