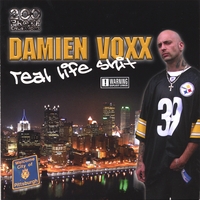 Damien Voxx is as serious as a man can be. From hardships, disappointments and loss he has learnt that life is not something to be taken lightly. The look this baldheaded Pittsburgh rhyme peddler throws at you on the cover of his debut album is one of someone who knows what is the real deal. The album track list further adds to that impression. “Take Me Alive.” “Pain.” “Why Mama?” If you think this is just fun and games, think again. It is Damien Voxx’s “Real Life Shit.”

In essence, there is nothing particularly wrong with Voxx’s style of rhyming. The big, tattooed Pittsburgh kingpin looking feller has a strong voice, and his breath control is dead in between reasonable and good. With his written wordplay he won’t be able to send a local battle champ running home crying hot tears of humiliation, but he definitely has his moments. All in all, he leaves a solid impression with bars put in place as carefully as cards placed on top of an almost finished full stack card house.

But. In cases like Damien’s there unfortunately always is a but. There is not enough creativity in his lines to keep the listener’s attention. His message is so grave it is hard to stomach at times. There is just one single positive track on “Real Life Shit,” and Damien and myself both agree he should stay far from singing when he’s doing “Zonin.'” The album on the whole reminded me of a big monster of a book, filled with important lessons, but written in prose that makes you put it back on the shelves after a couple of pages. Listen what he has to say for himself on “Anotha One”:

“And yeah, l wrestle with the questions of life
A choke hold on this mic
While dodging haters hate to see me in life
I’m climbing, 200 P.E. even steadily rising
Since you undergraduates been hating me for this rhyming
I’m on the move; other dreams. Another paper pursuit
Another bills, another debts, another paper removed (It’s real)
Another song, another shot at a deal
Another straps, another shells, another shot to be killed”

Whatever your reasons might be for listening to hip-hop lyricism, entertainment value is bound to be high up that list. Whether they are made for shocking value (Necro’s grueling rants), comical value (J-Zone mouthing off), or listening (Slick Rick sweet and colourful tales) an MC’s words should provoke, well, at least something. In Voxx’s tales, I miss that specific presentation element. There is bitterness, yes, a truckload full of dedication and frustration over a career not yet blown-up, but while focusing so much on getting his painful memories out, he forgets his role of master of ceremony. And masters of ceremonies have certain responsibilities to the crowd, no matter how blue they surely must feel.

Will Holt, owner of 200 Proof Endeavorz and Damien’s one and only producer on this album, is quite the local Pittsburgh business man. Together with “Real Life Shit,” he enclosed an advertisement in which he asks for “Aspiring Entrepeneurs.” They are to help him in building up a company which will “fill a void in the marketplace of legal services and identity theft protection.” I am not sure what he means by that, and I should take a look at his website to find out whatever the hell he means. Maybe he is looking for a way out of a middle-sized city wedged in between the Midwest and the Eastern Seaboard, with Christina Aguilera as most successful contemporary musical export product. Even though I am not an aspiring entrepeneur, I do find it odd Will Holt encloses such a document with an album that should be the jump-off for the best stallion in his stables. Whatever the reason of his divided interests may be, it shows on the boards. Voxx’s glum reflections deserve better beats than the uninspired keys, factory-made drums, and out-of-place sampling Holt slaps on his artist.

Holt’s biggest crime is in the drums section. A lot of times, they are so one dimensional, you’d have to continually pinch yourself to stay focused enough to keep listening. Sometimes they even have a slight resemblance to the rhythm patterns new age groups from the eighties used, specifically the ones with the bad hairdos and brightly colored spaghetti western overcoats.. He drastically deteriorates those weak percussion moves by adding bells I last heard in Whitney Houston ballads. When a song is called “Dead Man’s Lullaby” those specific type of bells have no reason being there. In general, the sampling department isn’t well developed in Holt’s repertoire at all.

Not all is doom and despair on the production side, although the moments are scarce. “Anotha One” has mood melodies seemingly taken straight from Stanley Kubrick’s “The Shining,” and Holt manages to combine uncharacteristic uptempo drum beats with layered sampling. The soldier’s drums on opening track “The Disciple” fit Voxx’s societal venom well, and immediately the level of “Real Life Shit”gets kicked up a couple of notches. The producer could really have elevated this album, if only he had fully put to use the glimmer of talent he displays on these songs.

While the MC makes matters way too serious, the producer takes things way too lightly. Maybe they should use one of those weird contraptions they use in old kiddie cartoons to exchange some gallons of the mind state they seem to be swimming around in. While they are it, let them force the mad professor from that same cartoon to throw in some additional talent, and maybe they will be all right.