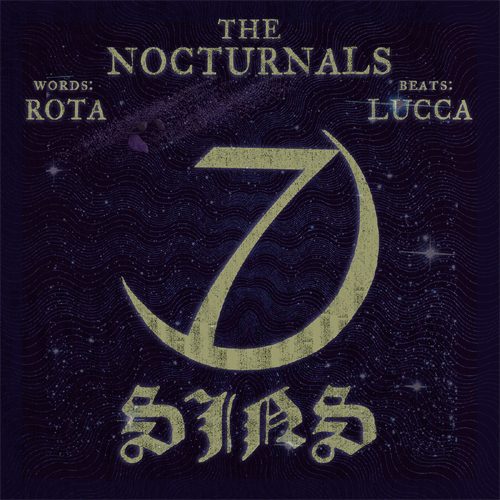 The internet has made it possible for virtually anyone with a decent computer and a little bit of equipment to record and publish a rap album. You’d think that the democratization of hip-hop would lead to a huge diversity of subject matter being covered in rap songs, and you’d be wrong. If anything, the subject matter seems to have narrowed to sex, drugs, partying, material possessions, and maybe committing crimes for money to fund sex, drugs, partying, and the consumption of material possessions. Even some of the so-called indie rappers mostly rap about how they don’t rap about sex, drugs, partying, material possessions, or committing crimes to obtain the aforementioned items. If the trend keeps up, in ten years all rap songs will be different variations of the same twenty words.

All of which is to say that there is room in the crowded hip-hop market for two guys to make an EP about the seven deadly sins, which is exactly what the Nocturnals have done. The Nocturnals are a Chicago duo featuring lapsed RapReviews writer MC Rota and producer Lucca. They’ve put out two albums since 2010 that straddle the line between cerebral indie rap and nerd core.

Rota’s nasally flow and neurotic lyrics make him a cross between B Real, Ad Rock and Woody Allen. However, he’s working without Mike D, MCA, Sen Dog, or Diane Keaton as a contrast. Rota wisely makes up for this lack of straight man/woman by enlisting rappers Adrienne Nadeau, Gatz N Goods, Wizard Jenkins, Young General and Wax to share the mic on four tracks, and Sara and K-Sam to sing on two. The guests add variety and the EP is stronger for it.

There’s a lot of humor on “7 Sins.” Rota raps about getting kicked out of synagogue for yelling “freebird,” raps a love song to Prozac, and mocks the current state of rap music:

“I know my last album was just ice, bitches and slaughter
So now I gotta go and write and some about my daughter
A song about my mom because surprise I fucking love her
I’ll take me as a baby and I’ll put it on the cover”

“I’m not a winner but I try a lot
I’ll do it for the Gipper
I’ll play a show for peanuts man
I’m cheaper than a stripper
I’ll feature at bar mitzvahs
Spit it at Yom Kippur
Still I spit it sicker than the industry can figure
What’s your name man? It’s Rota
Ain’t heard of me? Fine
I’ll just take the path less traveled while the herd is in line
Know my words are fucking nerdy with a turbulent mind
I’m just trying to dodge this desk job before I’m thirty”

There are definitely songs here that could be labeled nerdcore, especially album opener “Cardinal Virtues” and faux dance track “Fourth Base Sluts (Lust).” There’s some seriousness underneath all the humor, however. There is an edge of real emotion simmering in “7 Sins.”Rota is struggling with issues faith, love, and alienation. This keeps the EP from feeling too jokey and wacky. There are stakes to “7 Sins,” and Rota and Lucca are trying for something more complicated than just jokes and goofiness. Lucca does his part by supplying some solids beats, especially on “Pride,” Simple N Catchy (Greed),” and “Sloth.” The EP ends on a serious note with Why Not Love Me (Envy).” Rota ditches his nasal flow for a deeper, less affected delivery. He raps alongside singer K-Sam asking a former lover “Why not love me more like you did that night?”

If you like your hip-hop a little nerdy and a lot neurotic and are craving more Biblically themed rap music, then “7 Sins” is worth checking out. No one can accuse the Nocturnals of being the same old same old.