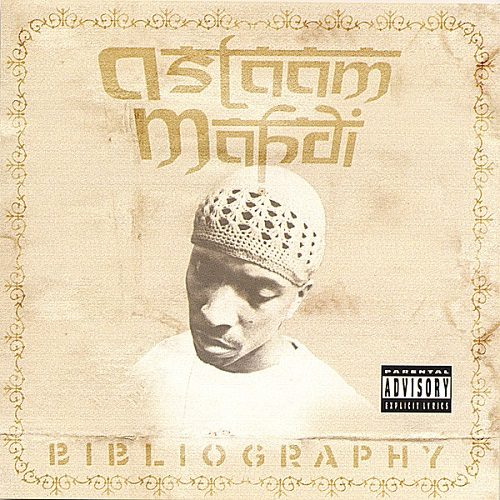 Whenever an artist or label tells me they’re “anxious” to read my review I get a twinge of writer’s block. In fact to be perfectly honest I often start avoiding writing about the album altogether, preferring instead to go Back to the Lab and cover older albums that deserve my attention. It’s not even that I mind the pressure, it’s that inevitably the results can lead to headaches and heartaches. Even if you say the album’s good they’ll feel you didn’t say it was good enough, and if you say it was bad they’ll say you’re a hater and that you don’t understand where they’re coming from. Rare is the “anxious” artist who knows how to receive criticism gracefully or respond back to it thoughtfully. I freely admit that in many of these cases I’m more than happy to pass the buck to someone else and let them deal with the anxiety.

In this case though I’m tackling Aslaam Mahdi’s “Bibliography” head on. I gave my word to a distributor and while even the most honorable among us can find that our word is not always bond (if you haven’t broken a promise or dissapointed somebody once in your life you’re just not human) I do intend to honor my promise here and hope that Mahdi and his distributor will be pleased with my open and honest critique. The album opens appropriately enough with “Aslaam’s Intro,” a Gozza produced track with heavy pianos and Nas samples which leaves ME feeling somewhat less anxious since it’s a quality start to the album. “It’s Working” features the same producer but moves from simple instrumentalism to verbal pugilism:

“Opinionated while my base is not imagination
These clones fakin jax, imitation duplication
Aslaam rocks, you’re replica of speculum
Given by addict, come songs I come behind are premium
Yo son it’s not that many comin to box with me
Can’t even stand up, how you gon’ now rock shit?”

Now I must confess the above transcript is best guess only. Aslaam Mahdi has a pleasant enough voice and the subtle beats make for a good headnodder, but there’s something not quite “working” on this track and it’s Mahdi’s delivery. The breath control is mostly on point but the diction is a little lacking, resulting in words that seem muddy and mumbled and are incredibly hard to discern. If you’re positioning yourself as a next level MC, clear diction is a must. Even overweight out of shape rappers who have to have their hype men finish lines at their live shows still have to knock it out the box one time in the recording studio first. “It’s Working” doesn’t sound rushed or forced, it’s obviously a song they took some time to craft, so it’s a mystery to me why Mahdi’s rap came out like this. Thankfully “Lu-Cipher” is either better delivered or better mixed because it’s a LITTLE easier to follow:

“The cats alone speak wisely, manifestin the Godly
85 savagely never knew sobriety
of scientific scholarly, honor God’s lessons
But with whackness he got an obsession
Whores can not be God consumption, sell his people white woman
Makin niggaz get off for a little nothin
Black devil with diagrams similar to vice delusions
And his dealings despised from the mind’s third eye”

Something becomes abundantly clear on “Lu-Cipher” – Aslaam Mahdi is either a 5%er or he’s definitely down with the Gods and the Earths. His raps are a call to brotherhood and upliftment that are eeriely reminiscent of Grand Puba’s words over two decades ago: “civilize an 85’er, gotta let him know the Devil’s a conniver.” I’ve always been fond of hip-hop artists who do the Math in their raps, and groups like Brand Nubian and Poor Righteous Teachers get strong replay among my crates of classics. A few barbs at “Devils” have never caused me concern, because Lord only knows there’s plenty of wickedness to go around in the world and plenty of people who fit the bill. My only concern is that if you’re going to make your point Arm Leg Leg Arm Head, you’d better come with some funky beats and rhymes for those body parts to be moving to.

“Bibliography” lives up to at least half of that equation, perhaps even 2/3rds by my OWN mathematics. The album is musically pleasant with not many missteps and plenty of positives worth touting. The title track is an Aslaam Mahdi and Gozza co-production with strong scratches and funky sax, featuring some of Mahdi’s most clear raps. “Recollect (Crews Get Bent)” has a subtle ethereal backdrop and strong drums where Mahdi professes to feel “serenity in times of hostilities” – a good philosophy to live by. I’m more than happy to listen to Mahdi do the “Knowledge” and perform lyrical “Gymnastics” while spitting “Elements” that are as strong as a “Trillion Sunshines.” By the time the album closes with the surprisingly abrasive “Vinyl Foreplay (2000)” it’s been a smooth musical adventure.

Lyrically “Bibliography” is a hard sell to the casual hip-hop listener. Aslaam Mahdi is clearly not a rapper for fans of D4L and Dem Franchize Boyz, but even your more conscious and righteous hip-hop heads may be SCRATCHING their heads trying to figure out where Mahdi is coming from. Even if you’re fluent in 360 degrees and have done all your lessons, the blessings Mahdi are delivering can still at times be completely incomprehensible. When they do come through loud and clear, they can border on being preachy. Aslaam is so serious about his mission it sometimes seems like he forgot that hip-hop can be fun too, something his producers clearly did not neglect. While “Bibliography” is not for everyone there’s definitely a niche audience who will appreciate where Aslaam Mahdi is coming from. With a little work on his delivery and perhaps lightening up the mood a little bit that niche could be greatly expanded. Mahdi has a world of potential and if you asked me what today’s mathematics is I’d tell you he’s tomorrow’s star who has yet to shine as bright as he can.