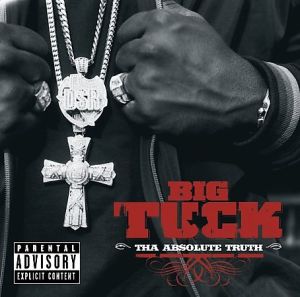 Until recently, Texan hip-hop equaled Houston hip-hop. Geto Boys, Scarface and DJ Screw were pioneers on the frontier in the old days, and the likes of Paul Wall, Chamillionaire and Slim Thug used that solid foundation to establish H-Town as one of the main capitals of Down South grinding. Dallas, half the size and twice the hunger, had no actual representation within that equation. Mixtape monster Big Tuck, one of the founding members of the Down South Rydaz crew, is very intent on scraping off some of Houston’s shiny coating and sprinkle it on top of his own home town. His debut “Tha Absolute Truth” is his file by choice.

Tuck already managed to get the Down South streets’ attention when he released the “Purple Hulk” mixtape in 2004. There must be something in the colour purple, because Spielberg’s Alice Walker adaption got an Oscar, Cam’ron gave his own career a new boost because of his mixing blue and red, and over 70.000 of Tuck’s purple Doctor Banners went over the counter. That is, if you take Big Tuck’s word for it on his Myspace page. That number, especially in the heavily competitve Down South scene, is not to be messed with. “Purple Hulk” was the most successful in a long string of more than thirty street tapes, and got him the attention of numerous major record companies.

Because of his dedicated Dallas fan base, expectations were riding high for “Tha Absolute Truth.” After multiple deal offers and careful consideration, Tuck signed with Universal, and strangely enough presented his first official album in New York. That was in September, and after multiple postponed release dates, and a break-up within Universal, the album is supposed to hit stores at the back-end of January. Welcome to the major league, Mr. Tuck.

Enough marketing talk. Sergeant Tuck, as Big Tuck calls himself on one of his tapes, has a mean bark and slightly sandpapered vocal chords. In army fatigues, he wouldn’t have had any trouble rustling a group of rookie soldiers through a barbwired obstacle course. His MC’ing style resembles the conversational tone a sergeant would use when reporting to his superior officer, complete with that southern drawl all drill sergeants seem to have. Staccato, to the point, and devoid of any form of fancy talk. It is a style of rhyming you either love or hate, but in its simplicity, Tuck certainly has got something going for himself.

“Welcome to Dallas” is the official introduction to the new movement Cedric “Big” Tuck wants to get started. Monster truck bass gets flanked by gunfire sounds, gladiator cheers, and a synthesizer sample which slightly resembles a slowed down version of 50 Cent’s “In Da Club.” It immediately makes clear in what way Dallas is different from Houston. The song embodies the hunger of a city trying to prove its worth.

What impresses most about the rest of this album is the production. The bass in most songs is made for blasting out of the trunk of your car, but is counterbalanced by eerie loops you can find on those old psychedelic funk records out of the seventies. “We the Truth” even reminded me of the old Scooby Doo series when Freddie, Velma and Daphne dragged Shaggy and Scooby into their little van, and drove off into another weird ghost-infested swamp. There are also some filler tracks, especially on the second part of the album, but if you like stomping yourself out musically, “Tha Absolute Truth” is the album for you.

At times, the big man’s flow is so simple it got on my nerves. In particular the tracks where the instrumentals falter (“I’m a Ridah”), you wish he would take his lyrics one step beyond. His subject matter is pretty much limited to his love for cars, crew and coochie, which isn’t a bad thing for a southern street album. But when he drops lines like “I’m a black Lamborghini, you don’t run like me”, I wish he wouldn’t oversimplify himself too much. Tuck has the voice and the rep, and I believe when he puts some more effort in his lyrical content, he has a long way to go.

The Dallas champion gets support from most of his D.S.R. crewmates, like TumTum, Double T and Lil’ Ronnie. If “Tha Absolute Truth” blows up, they will benefit just as much as Master P’s cronies or 50’s G-Unit did. Of these accomplices, TumTum impresses with his appearance on the ultra-aggressive “Tussle.” The Houston scene hasn’t been reluctant in supporting the maturing movement in Dallas. Chamillionaire, who seems to be rhyming anywhere and anyplace, drops some self-confident verses on “I Know U Want That” and his former steady collaborator Paul Wall does some Cadillac cruising on the menacing “Dippin in Da Lac.” The most surprising appearance, however, comes from African queen Erykah Badu. On the moving “Ain’t No Mistaken (Danger Pt. II),” she follows through on her Dallas roots by doing background vocals for hungry Cedric. Tuck gives the listener a rare look under the hood, without losing his credibility by talking about his rotten childhood:

“Tha Absolute Truth” is indeed very absolute in its approach, but it isn’t the gospel truth quite yet. Big Tuck has repeatedly declared he wants to be the champion of a successful Dallas takeover, but I think he has a lot of ground to cover before he can contest H-Town, if that is his intention at all. Until then, this is a solid Down South debut that shows what Dallas is potentially made of.