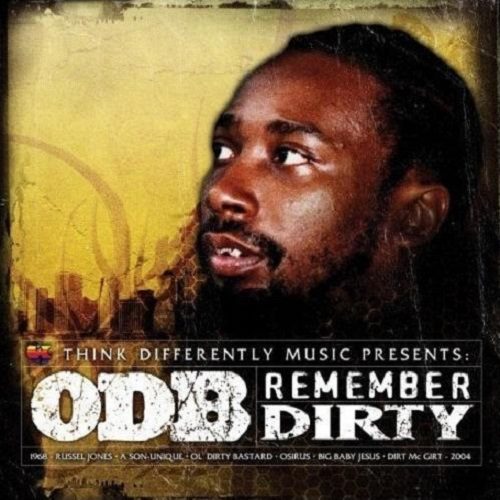 When Ol’ Dirty passed away every DJ that could put out a memorial mixtape. I usually don’t mind DJs hustling any way they can, but when it comes to something like a memorial mixtape I feel you should only release something from the heart and not try to capitalize on someone’s death. Think Differently Music did just that, releasing a 2-CD collection entitled “Remembering Russell Jones.” Two years after his untimely death, Think Differently releases “Remember Dirty” to make sure fickle hip-hop fans don’t forget the man who was once Hip-Hop’s most captivating figure. While many of the so-called memorial mixtapes contain little more than a greatest hits collection, “Remember Dirty” delivers much more, allowing fans to see the eclectic side of Russell Jones that made him such an endearing rapper.

On the musical side of things, plenty of dope ODB tracks are included on here. The surprising thing is that some of the tracks sound like they were unreleased and it’s a shame since they are of such high quality. “Skrilla” features RZA on the hook and it sounds like RZA also composed the beat. Over a high energy beat, ODB drops another crazy yet clever verse:

“When you get that skrilla, nigga act familiar
Own family will kill ya, mammy be a skrilla
Box of bullets in flavors like Mike and Ike
Friday night I’m in the bed with a bitch and a dike
Ol’ Dirty 7:30 â€“ Got the 30-30
Got a mouse scope, ain’t aiming at no birdie
My nameplate travel through the interstate
Glock in the stashbox, my drop top ventilate
Permanent AC, used to boost at Macy’
Smoke out Mr. Spacely and still dick Tracy
I put on thumper bass, make your chest inflate
I’m at the herb gate, watch my money bake
Disrespect me where I lay m y head my hammer spray
My cybertech, nylon suit, inflate gamma ray
When I speak ears open to the size of cymbals
Make you tremble, watch what the fuck my gun do”

The dope tracks don’t stop there though as ODB is very well represented. “Stop” is another RZA assisted gem with another high octane hook. “Dirty Mef” has already found its way on an album, but it still sounds great even the second time around as Mef and Dirty trade verses and both bring their A game. Other noteworthy tracks include the Ludacris assisted “Coochie” which shows ODB could have even made hits in the dirty south era and the DJ Premier produced “Pop Shots” which has already been released on other ODB mixtapes.

What sets this collection apart from other ODB mixtapes is the inclusion of sound clips from many of ODB’s most publicized moments. His infamous speech during the 1998 Grammy’s is included and only makes us miss ODB even more. Other small clips are included but the best is ODB’s press conference held after he was shot by police officers. While it’s probably because it is the only copy that could be obtained, it sucks that during the press conference we have to listen to Howard Stern and his cronies make fun of Ol’ Dirty Bastard. Dirty made us all chuckle from time to time, but we laughed with him and it seems Stern likes to laugh at him. If you just ignore the background chatter you’ll be able to enjoy what was a unique and rare glimpse into Dirty’s mind.

“Remember Dirty” is a fitting tribute to Ol’ Dirty Bastard. It celebrates Russell Jones’ crazier side and is sure to make fans smile with his crazy antics both on and off record. The inclusion of material from interviews and press conferences is great as it provides listeners with hard to find material and a different perspective from the misunderstood man. The music included is classic Ol’ Dirty Bastard and should be appreciated by all fans. Furthermore, you can find some of Ol’ Dirty’s tracks that were meant for his Roc-A-Fella debut and there’s no better company to purchase them from than one which has basically become the official Wu-Tang record label.