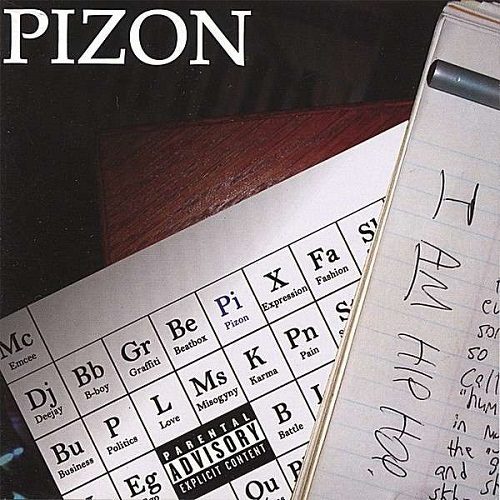 Does any one person embody hip hop? Can they? Or is the essence of hip hop in every person who lives it? By saying that he is hip hop, is Pizon being arrogant, or is he just stating the obvious? Regardless, with his debut album, Pizon is making a bold and clear statement. He’s here, he’s going to make an impact, and he’s not playing by our rules, he’s making his own.

Pizon isn’t the greatest rapper you’ll ever hear by a long shot, but despite the pretentiousness of the album title, his plain-spoken flow opens the listener up to a charming combination of humility, clear-headedness, and wit. “I Am Hip Hop” starts on a high note, after a short skit, the album is off with the title track:

“I am, Hip Hop, in all its glory
In due time, I’ma tell you all my stories
From the good to the bad, the happy to the sad
Like the rise and fall of my daddy and I’m glad
You took the time to listen cause I envision
Giving them everything living inside of me
A couple love songs sprinkled with a touch of misogyny
So fuck who you try to be
Who am I? I’m just me”

It’s not all good though, and the album takes a huge downward spiral with “Homegirls” and “Say Goodbye.” Nothing is wrong with lightening up the mood a little, but using the line “getting head from my homegirls” 26 times in a song gets redundant.

Also, it’s fine for a new artist to make an album that harkens to the aesthetics of ’90’s hip hop (especially one with this title), but the production here is dangerously behind the times. The high piano samples and string notes are fine on an introduction, but seven of the fourteen songs use the same formula, and two of the other half are skits. Worse, the songs that don’t have this formula are awful.

The light thump and cellos of “Drastic Measures” is a welcome introduction to Pizon’s darker side, an echo effect on his voice channeling a weird combination of E-40’s crazy off beat rambling and the GZA’s coolness both lyrically and vocally. However, at this point, Pizon’s talking flow begins to lose its charm and become unpleasantly monotonous. This isn’t helped by the fact that “Streets Never Change,” a great song in its own right, follows “Drastic Measures,” and is essentially the same song.

“Four Letters,” features Deacon the Villain, but ten tracks into the album, comes too late to save some of the tracks in the middle from a general feeling of repetitiveness. And if you’ve heard Dreddy Kruger’s Think Differently compilation, you’ll immediately recognize the posse cut “Give it Up” as a much worse version of the track on that album by the same title, using the same sample.

Those two tracks manage to break the monotony of the album in time to save the last songs of the album. This is fortunate, because despite having a boring flow, Pizon is blessed with the rare ability to bring beauty out of ugliness, and it shows in the epic “I Feel You.”

“If there’s one thing I learned from my father, it is not to judge
And speaking of my pops, no I ain’t got a grudge
How can I deny my blood? And on top of that
Despite what you may think, yo he showed me a lot of love
Some of us never had a role model
So it may not always be obvious which road to follow
But life, life always shows you the way”

The album ends with “Otwt,” but we’re granted two superior bonus tracks in the remix of “Streets Never Change” and “Angel Wings,” an ode to his girlfriend, who died in a plane crash. Like most of the album, they’re tracks that could have been morbid, but are saved by Pizon’s positivity and clear-headedness.

Overall, despite being a very good lyricist, Pizon just doesn’t have quite enough charisma, or good enough beats, to carry a whole album. His flow is so non-existent; it becomes hard to tell where the talking stops and the rapping begins. As he grows as an artist, I fully expect that to change. That said, does he live up to the promise in the album’s title? He doesn’t “redefine what it means to be an MC” as he claims, but he’s as genuine as any rapper has ever been. He wears his emotions on his sleeve, dedicating a song to his dead father and girlfriend each, and is brave enough to share them with the world. He stays true to his vision, and executes it well. And really, what’s more hip hop than that?