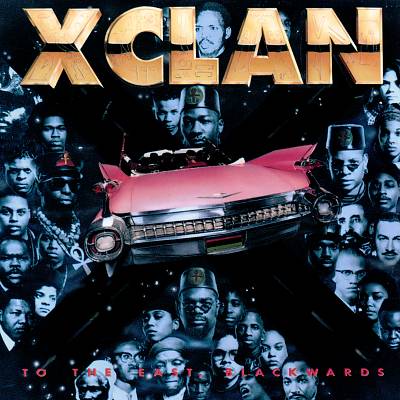 X-Clan :: To the East Blackwards

A new album and tour in 2007 has made old schoolers remember with fondness the greatness of the X-Clan. The new effort, Return From Mecca, holds up very well despite a lot of competition from music where social awareness has more to do with who is dancing in the club instead of who owns the land where the club is located.

There was a time when hip-hop was feared by the status quo and politicians, no one was hanging out with Donald Trump or playing virtual football with Don Shula. X-Clan were presented to the world when Public Enemy were able to become a success with three albums that spoke against racial and social inequality. It was the black struggle spoken with vengeance, modern spirituals where Afrocentricity was about life and how it was deteriorating at a rapid pace.

The group was a collective of various rappers, artists, and representatives, but the core had always been Professor X The Overseer, and Brother J. Brother J was the MC of the group, who knew the role of an MC and spoke with authority. Professor X’s role was in many ways not unlike Flavor Flav, but his public persona was the complete opposite. X was far from a clown, and his role in the music was to be the bridge between J’s verses, with certain keywords and phrases that became a part of his routine.

The album opened with “Funkin’ Lesson”, which was released as a single and video, but on the original album it was listed as “Track 0”. The formal introduction is “Grand Verbalizer, What Time Is It?”, the Verbalizer being Brother J. With this song, Brother J established themselves with a definition of their mission:

“African. Very African
Come and step in brother’s temple, see what’s happenin’
Then taste the bass flow, coming from a zero
Tell me what a sissy know, funkin’ lesson is a new flow
Stalking, walking in my big black boots
Living off the Earth eating herbs and fruits
The children awake me by the mountain in the river
And gather ’round the fire for the scroll that I deliver”

It was the kind of wisdom that spoke of street smarts in a metaphorical manner, taking things to Africa and stating that injustice is something that can be discovered throughout history. Line after line, verse after verse, Brother J kept offering knowledge and wisdom in a matter that was very much in the Public Enemy and Run-DMC tradition, where once you’re on a roll, why stop?:

“Tick, tock, tick, we go sun to moon
Verbalizer speaks, it’s a quarter to doom
Self destruction is not a key function
Never around the leaders, ’cause the people keep frontin’
When will they realize the body needs head
It’s more than what’s said when a leader lies dead
Come into the darkness, path is light
Death meaning life as the pharoahs take flight
Too much degrees from a silly pale thief
You can’t define what’s direct from the East
Gods protects me, he selects me
God makes a path, so the word respects me
0 to 9, grandest creator
I pray for those on both sides of equator
Professor X, when will they learn?
Once light enters doors, death no return, no return”

Hearing that and the other verses for the first time was as powerful and moving as hearing Boogie Down Production’s “My Philosophy”. One didn’t have to be the target in order to understand the strength of the arrows Brother J was throwing. To add (possible) insult to injury, Professor X would be there to tell you why those words matter, and just press those arrows in deeper.

The album was originally promoted with its first single, “Raise The Flag”, and J’s tone is fairly calm here but still manages to make his point very clearly:

“One man is not a nation, Brother builds a clan
Certer than the circle creates the better man
The colors, the brothers, the key, the motherland
This causes to assemble this blackman
Red, Black and Green are the colors of the flag on the rise
Cause a nation should be guised
Another flowing, as I comfort sons and daughters
Knowledge leads the way, so I flow like Nile’s waters
African-American rebel of authority
Majority, while I’m so-called minority
Sometimes they ask me, “Why are you the rebel?
Is that the way you choose, attain the bass and treble?”, yep
“Brother, don’t get deep,” that’s what they tellin me
Just like a sellout, while society
Gets stronger and stronger, my race gets weaker and weaker
Maybe I can make a difference through a mic and a speaker
So my lyrics flow different than a hip-hop bebop
Mic controller who turns out to be the flop
My wisdom God-given, excercised ‘pon a rhythm
Power postive and strictly Bible, that’s how I’m living
Fortress we establish high, so none attack it
Back to the ways of our mathematic blackness
They can’t solve it, it’s somethin they can’t catch
Took respect off our lives, so now I’m snatchin it back
Power flows in the nation, there is life in the key
Let us all bind together in the Red, the Black, the Green”

His flow comes off a bit like Lakim Shabazz, while the sample (courtesy of Roy Ayers) gives the song a nice jazzy feel. This jazz feel is significant, for there weren’t too many people in hip-hopc sampling jazz in a major way, and perhaps this is one reason why a lot of buyers didn’t take to the song. Instead they flipped the single over and found “Heed The Word Of The Brother”, which for many was their first exposure to this clan, its membership numbers unknown. Those listeners would learn to remember the scripture as said by Professor X:

“Exist in a state of vanglorious
As we are protected by the red, the black and the green
Heed the word of the brother
SISSIES!”

Brother J then would run down the list, refering to everything from thievery, miltary tactics, the motherland, and the falsehoods of society, laid over “More Bounce To The Ounce” in a manner that may have had nothing to do with MC Breed’s “No Future In Your Frontin” other than sample source, but it did so with the same kind of funk and integrity.

It was definitely a pro-black album, and while its target is obvious, the X-Clan simply spoke against what had been stolen from not only Africans but many cultures throughout the world. As Professor X states in “Verbs Of Power”, those crimes include religion, art, sciences, government, writing, mathematics, astrology, philosophy, inventions, culture, sense of reality, speech techniques, the tolerance of ignorance, raping of a people, subjecting blackness to an inhumane system, changing of facts, claiming the divine, disgracing a nation, production of a white Kryptonite, trespassing on most sacred ground, trying to replace the flag of power with the symbols of slavery, and the hardship of hundreds of years. True to himself, he emphasizes by the way… Vanglorious! In other words, he knew of what he was speaking, but do you?

Looking back, the production from Jason “Brother J” Hunter, Lumumba “Professor X” Carson, Claude “Paradise” Gray, and Anthony Hardin was not as revolutionary as what The Bomb Squad were capable of doing. In fact, many of the beats used were just revisions of the well worn and proven. What was key (emphasis on the key) was how Brother J and Professor X presented themselves over those beats, it had the feeling of a live show or even a rough demo. That demo aspect gives the album a rugged feeling, because at times the beats are extra gritty (partially due to the sampling technology that existed in 1989 and 1990) and the vocals in some tracks aren’t well mixed. What does work is the idea that it had the feel of a mix tape, something underground, and hip-hop was still very much part of the secret club where everyone within understood the words and music, and knew where everyone was coming from. The messages found within To The East Blackwards were not targeted only for those outside of the hip-hop community who needed to hear them, but for those within who may have sold themselves out to the point where they would forget their own origins and roots.

In its wake, the success of To The East Blackwards would result in solo projects from Isis (now known as LinQue) and even Professor X, whose Years Of The 9, On The Blackhand Side was a bit left of center even for X-Clan fans. Professor X’s wife, Queen Mother Rage, also released an album on Cardiac Records, some will remember her down-tempo hip-hop classic “Slipping Into Darkness”. Queen Mother Rage’s voice was one of the best in hip-hop, period, and rightfully should have been up there with the likes of Queen Latifah and MC Lyte, but that was not to be. It would take awhile before Brother J branched out on his own. Any flaws that the first X-Clan album had were cleaned up significantly on their second album, but as is the hip-hop tradition, you always go back to the first. If artists like Public Enemy, Poor Righteous Teachers, Paris, and Brand Nubian spoke of a country where liberty and justice was meant for a select few, X-Clan unified with themselves and that brotherhood, in order to seek a bit of sanity that their forefathers were never able to find. That anger, and the fear of uncertainty, is still present in the recent works of The Roots, Little Brother, Tanya Morgan, and Nate Metzer, but the present musical landscape almost seems as if the well traveled path to glory has disappeared off the map. Maybe that path is now under wraps and being protected… by a key.