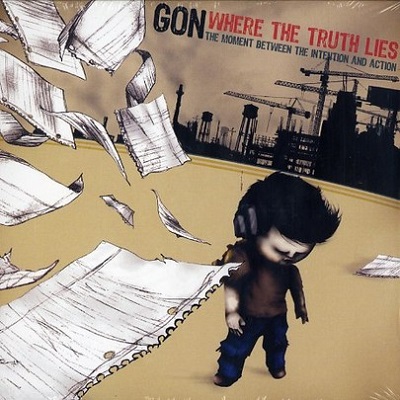 Gon :: Where the Truth Lies (The Moment Between the Intention and Action)

This is an interesting release that falls somewhere between an EP and an LP, clocking in at about 35 minutes. Also, it is a difficult distinction to make between whether this is intended to be an actual release from Gon, or a teaser for his true full-length entitled, “Illustrations in Braille” that releases in the early Spring. Moreover, was this just created to acknowledge a presence for a unknown label, Urchin Records, that have the rights to C Rayz Walz’ next album, “The Dropping”, as on some websites it is bundled with the purchase of that subsequent release. Whatever the case, “Where the Truth Lies” is in the music, but where does Gon fall on the spectrum of his ‘intention’ to make a landmark album and the ‘action’ of actually doing so?

Gon is self-described as what it would sound like if an 8ball could rap, but he is not nearly frenetic and random for that to be a fair evaluation. Still, there is something to it, because he is definitely a different entity than most representations of Hip-Hop today. He is often self-reflexive in his rhymes, like Slug of Atmosphere, but less depressed in nature than that. In fact, on his MySpace page there are a few falsified quotes from rap legends “quoting” just how great Gon is, so he obviously has some confidence in himself (even though it is kind of annoying). Gon is of Arab decent presumably, but he sounds more like the typical white underground emcee. The enigma of Gon is not what is important though–it is the music.

The first track, “Intention” (the conceptual aspect is revealed), is something of a misstep. The beat is comprised of a spacey whistle sound that cuts into some sci-fi inspired synthetic noises, which lends itself to be a distraction more than a compliment for his rhymes. The rhyme scheme on this song is very simple, short and concise, which makes it sound simplistic and unstructured.

However, Gon gets onto the right track with the funky second track, “Noticeably Hidden” that has a nice guitar strum sample and a vocal track, some “lala’s” to add to the airy feeling that the cut aims for.

Midway through “Where the Truth Lies”, there is a lag of quality material until the heavy hitters come in the form of production credits from Stoupe on “Nine Cornered Circle” and RJD2 on “Impregnable Ruins”, respectively. Stoupe’s effort is the stronger of the two quality tracks as RJD2 gets a bit overly complex with his creation. Stoupe offers a tremendous high-pitched vocal sample that really sets a mood. However, Gon really brings his best lyrics for the RJD2 joint with the following:

“I once could fly home
And the times that I slept with a gun to my throat
Was stunned when I woke
And these little critics midgets
Didn’t finish their spinach
And now their sitting insisting that I justify growth
With hunger, die broke
Not your cup of tea
That comforts me
But the luxuries and the funds to buy hope
Son, your time’s close
Though, don’t expect to find your life’s answers in a song
Especially one that I wrote…”

This is the one song of Gon’s that really seems to have a sense of focus. The song as a whole represents that dark personal poeticism that is becoming a welcomed popular trend among many underground Hip-Hop musicians.

When Gon brings out the big guns with the relatively high-profile producers he seems to play to the level of his producer. That is a good sign of things to come for “Illustrations in Braille” coming this Spring, as is the track on his website entitled “Cloud Conversation” that uses a sample from the underappreciated Brit-Rock band Star Sailor.

Ultimately “Where the Truth Lies” is a hodge-podge of an album that never truly finds its groove. The middle of the album is filler material, but there are some pretty interesting tracks, particularly near the end. Urchin Records’ release is right there between the ‘intention’ and the ‘action’ of making a gem. Here’s to hoping that action will someday come.

Gon :: Where the Truth Lies (The Moment Between the Intention and Action)
6Overall Score
Music6.5
Lyrics5.5