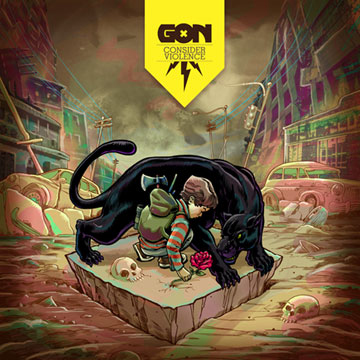 “This world is full of lovely, elegant, heartwarming stories, but this CD is not.”

And so begins the intro track on Chicago emcee Gon’s debut album, “Consider Violence,” a politically and socially conscious work that examines some of the problems Gon sees around the world. In a Facebook message to fans explaining the album’s name, Gon writes:

“I am not a violent person, nor do I hold the belief that the solution to the world’s problems are to be sought through massive destruction of the ‘others’. I do, however, see violence as a necessary tool for people who have no other option and so forth.”

“Consider Violence” is a fitting title, though, not only because of the lyrical content of the album, but also because of Gon’s aggressive and violent delivery. As he deals with issues such as conflict in the Middle East, racial profiling, and his struggles to make it as an underground rapper, Gon comes with an f-you mentality and a raw uncensored style of rhyming that, while more toned down and less complex, is reminiscent of Eminem’s style from his “Marshall Mathers LP” days. With a good mix of busy up tempo beats and slower, more reflective tracks, “Consider Violence” is Gon truly bearing his inner thoughts on life without really caring what anyone else thinks.

In 2005, Gon was nothing more than a college student with a passion for hip-hop when he founded Urchin Studios with a couple friends as a means of getting his music out. Two mixtapes and five years later, Gon still has a number of doubters, and he doesn’t shy away from expressing his frustration with the rap game on “Consider Violence.” “Never Knew Me” is his personal call out to all those who have hated on him and on Urchin Studios, as he raps “Keep your lesson, I don’t need a reverend/ You’re the reason they invented voicemail, leave a message.” And on the track “Echo,” over a simple drum pattern and an eerie string sample from Clint Mansell’s “Lux Aeterna,” Gon spits:

“In many ways, emceeing is the art of
Wasting one’s life complaining bout it ’til it falls crushed
Lower middle class to middle class to skipping class
To spitting raps to scribbling facts to build this track before my heart bust”

In case it wasn’t clear already, Gon has no qualms about fully expressing himself, even if it means being overly explicit or very critical of the government (once again, a very Eminem-like mindset). On “White Flag,” over a pulsing synthy piano, Gon engages in a call and response with another emcee:

Gon isn’t afraid to make a political statement on “Play Nice,” either, as he raps: “And someone tell Wolf Blitzer to shut his fucking mouth/ Save that fabricated hatred for another crowd.”

While Gon’s lyrical prowess is, for the most part, able to carry a song by itself, “Consider Violence” has several guest artists who bless the mic, as well. Peter Frank sings the chorus for several tracks on the album, including the lead single “Imaginary Doors.” Reef the Lost Cauze (member of the underground hip-hop supergroup Army of the Pharaohs) and Urchin Studios rapper Ed Hooligan each spit a ferocious verse on “Peace, Harmony, & Hugs,” which features a piercing high-pitched synth contrasted with a deep brassy synth and an aggressive drum loop. Another Urchin Studios artist, New York emcee C-Rayz Walz, collaborates with Gon on the track “Black Rain,” which pits a soothing flute melody over a set of bongo-like drums.

In the end, what it really boils down to is that “Consider Violence” is not for everyone. Gon’s brash and uncensored style of rhyming may drive some listeners away, but those who give the CD a thorough listen through will find that Gon’s lyrics, full of political and social commentary mixed with witty one-liners, make for an interesting and eye-opening album. While “Consider Violence” may not have any impact on the mainstream rap market, any hip-hop fan looking for something with a little more lyrical depth than the billboard chart toppers of today should look no further than Gon’s debut album.