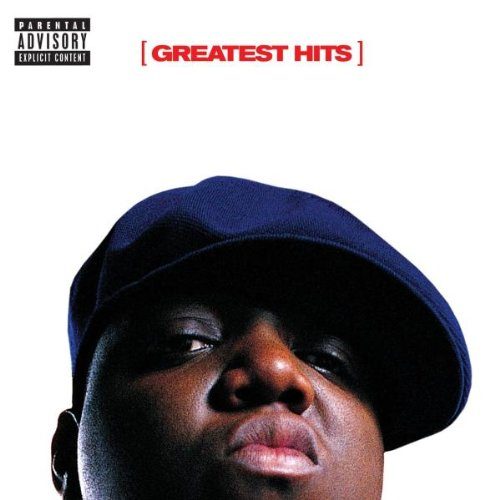 “Yeah, this album is dedicated
to all the teachers that told me I’d never amount to nothin
To all the people that lived above the buildings
that I was hustlin in front of that called the police on me
when I was just tryin to make some money to feed my daughter
And all the niggaz in the struggle, y’knahmsayin?
Ha, it’s all good baby BAY-BAY!”

There could be no more appropriate way to open a Notorious B.I.G. album titled “Greatest Hits.” “Juicy” was the first song from the man popularly known as Biggie Smalls to crossover and become a huge hit. For the Brooklyn, New York native who was born Christopher Wallace, it was quite literally “all a dream” even he couldn’t believe he had achieved. From youth he had idolized hip-hop stars and hung their pictures on his wall, now HE was the one people were buying magazines to clip photos from. Biggie was the living embodiment of the cliched “American Dream” and wasn’t afraid to say so. While lines like “Super Nintendo, Sega Genesis/when I was dead broke man I couldn’t picture this” may seem hella dated in 2007, picture the context and visualize the boy who never had anything his whole life suddenly treating himself to the best in everything. If Biggie were around today the line would be “PS3 and Nintendo Wii/I never imagined that it could happen to me.” Who could be mad at that?

Quite a few people, sadly. Success breeds envy, jealousy and hatred. Christopher Wallace was happy to share his wealth with family and friends, making sure all his loved ones had funds and whatever they needed, but the funny thing about being broke is that nobody ever holds have nothing against you. Once you’ve achieved success you must be doing something wrong – you sold out, you ain’t real, you don’t come around the hood no more, man he’s just pop and he ain’t representing REAL NEW YORK HIP-HOP. Biggie took it all in stride in videos and songs, but interviews and articles revealed the pressures of success were causing mad stress. Further exacerbating the situation was a hostile atmosphere between the East and West coasts of hip-hop, focused largely around New York and Los Angeles, with both sides picking their most famous and commercially successful rappers as their representatives. While Tupac Shakur embraced this role with typically overexuberant and nihilistic enthusiasm, Biggie was far more reluctant to take potshots at his fellow MC’s. Perhaps Big recognized the dangers involved in two rap artists with large cliques of friends and hangers-on and millions of fans escalating the perceived rivalry, or perhaps he was just being a savvy businessman and recognizing that infuriating the West would just limit his record’s success. That didn’t stop people from reading between the lines of B-side records like “Who Shot Ya?” anyway, claiming it referenced a robbery orchestrated by Biggie when both he and Shakur’s camp were in the same New York recording studio.

“Who shot ya?
Seperate the weak from the ob-solete
Hard to creep them Brooklyn streets
It’s on nigga, fuck all that bickerin beef
I can hear sweat tricklin down your cheek
Your heartbeat sound like Sasquatch feet
Thunderin, shakin the concrete
Finish it, stop, when I foil the plot
Neighbors call the cops said they heard mad shots
[…] Thou shalt not fuck with raw C-Poppa
Feel a thosand deaths when I drop ya
I feel for you, like Chaka Khan I’m the don
Pussy when I want Rolex on the arm
You’ll die slow but calm
Recognize my face, so there won’t be no mistake
So you know where to tell Jake, lame nigga
Brave nigga, turned front page nigga”

The hype continued to escalate from there, with Shakur releasing songs like “Hit ‘Em Up” that were not in any way vague and issued direct threats at Biggie and all of his friends. Wallace continued to juggle his recording career, legal problems and family commitments while the media stoked the fire and Shakur did enough trash-talking for both of them. Nevertheless if one can read between the lines on Biggie’s songs, it’s only fair to see what can be gleaned from the few times he DID purposefully reference the beef on tracks like “Notorious Thugs”:

“Armed and dangerous, ain’t too many can bang with us
Straight up weed no angel dust, label us Notorious
Thug ass niggaz that love to bust, it’s strange to us
Y’all niggaz be scramblin, gamblin
Up in restaraunts with mandolins, and violins
We just sittin here tryin to win, tryin not to sin
High off weed and lots of gin
So much smoke need oxygen, steadily countin them Benjamins
Nigga you should too, if you knew
What this game’ll do to you
Been in this shit since ninety-two
Look at all the bullshit I been through
So-called beef with you know who
Fuck a few female stars or two”

What’s the conclusion then? There really wasn’t that much beef in Biggie’s mind, since the closest he’d even come to saying Shakur’s name on wax was “you know who.” It’s somewhat dissapointing that the classic Biggie song “Going Back to Cali” was NOT included on this compilation, because it’s an even further illustration of how little static he had with his left coast compatriots, featuring lines like “Smoke some nice sess in the West, y’all niggaz is a mess/Thinkin I’m gon stop, givin L.A. props.” Unfortunately that didn’t stop people from feeling they had an issue to prove, whether it was rivals from Death Row Records or fans who felt Biggie was the personification itself of New York disrespecting California. Shakur’s violent death in a driveby shoting in September of 1996 further exacerbated matters. Motherfuckers blamed Biggie, even though a connection was tenuous at best, and wanted payback. The issue came to a head on March 8th, 1997 when Biggie was in Los Angeles for the Soul Train Music Awards, and in the early morning hours of March 9th while leaving an afterparty with his entourage he was shot multiple times in the chest during a driveby. He was pronounced dead at the hospital at 1:15 that morning. It’s now been almost ten years to the day that hip-hop lost one of its most successful and popular MC’s; more importantly, a mother lost her son and Christopher Wallace’s children lost their father.

The dual tragedy of Shakur and Wallace being murdered half a year apart left scars on the heart of hip-hop which have never fully healed, although thankfully cooler heads finally prevailed and realized how idiotic a feud between the East and West coasts of rap really was. The grave was no impediment to their success as musicians, ushering in a new and arguably creepy trend of posthumous rap albums going gold and platinum, leading both critics and rap cynics to wisecrack “dead rappers get better promotion.” For Biggie this proved a daunting task given he was not the prolifically paranoid artist Shakur was, who saw “Death Around the Corner” at every turn and churned out hundreds of songs as fast as possible before his demise came. Nevertheless Bad Boy Records has made the most out of the least, and there have been three releases since his ironically named “Life After Death” hit store shelves. In 1999 “Born Again” scraped up a few unreleased songs and a large number of guest verses Biggie had done for other MC’s and recycled them into new material. The most famous of these tracks “Dead Wrong” is included on “Greatest Hits,” a song as notable for Eminem’s surprising guest appearance as for Biggie’s unrepentantly violent lyrics, allegedly so gangster that Puff Daddy thought the song unmarketable and tried to have it scrapped:

“Make up to break up, niggaz need to wake up
Smell the indonesia; beat you to a seizure
Then fuck your moms, hit the skins til amnesia
She don’t remember shit! Just the two hits!
Her hittin the floor, and me hittin the clits!
Suckin on the tits! Had the hooker beggin for the dick
And your moms ain’t ugly love; my dick got rock quick
I guess I was a combination of House of Pain and Bobby Brown
I was “Humpin Around” and “Jump-in Around”
Jacked her then I asked her who’s the man; she said, “B-I-G”
Then I bust in her E-Y-E”

While it seemed this would be the right note to end Biggie’s career on, there turned out to be still more ways to flip his library. In 2004 the remastered “Ready to Die” was released with a bonus DVD, and 2005 saw a concept most associated with Frank Sinatra flipped onto Biggie in the form of a “Duets” which was subtitled “The Final Chapter” either as a marketing strategy or a bizarre form of reassurance that Biggie would finally be allowed to rest in piece. It’s here that “Greatest Hits” becomes a truly absurd statement, as this album recycles songs from an album that recycled songs and turned them into duets Biggie could never have possibly imagined while alive. It’s worth noting many of the people who bought “Duets” may have NOT heard the two songs from it included here, “Want That Old Thing Back” and “Running Your Mouth,” because they were NOT included on all versions of the album and were instead offered as a retailer-exclusive bonus CD. Of the two the latter is more notable for a slew of guest stars, an incredibly rugged Soopafly beat, a gangsta hook crooned by Nate Dogg, and a rarely heard Biggie verse that once again shows off the darker side of his personality:

“Fuck around and feel the fury of a high nigga
When I get busy, throw your hands in the sky nigga!
I got the illest of the ill mentality, niggas be grabbin me
Knowing that they’d rather be stabbin me
All up in my back tryin to take my track
When I used to sell crack I ain’t had problems like that
Street rules!! Watch your pockets and your jewels
A nigga front, throw the gat to the fool
Next one to move is gettin blasted
Street sewer flows from the ill ghetto bastard”

Oddly for an album perpetuating to represent Biggie’s “Greatest Hits” a lot of these songs could not be called hits in any conventional sense of the word, and that’s not just because some are posthumously manufactured inventions of music splicing technology. As dope as the DJ Premier produced “10 Crack Commandments” and “Unbelievable” are, these songs never appeared on any radio playlist or Billboard chart, and to be perfectly frank they were much too hardcore for that kind of mainstream exposure. Their inclusion to flesh out the length of this album makes sense, but they certainly don’t fall into the same category songs like the “One More Chance” remix or Junior M.A.F.I.A. smash hit “Get Money” do. In the end ascertaining the reasons behind what was and WASN’T chosen for this album just gives you a massive headache, and really isn’t worth the effort. It’s better to assume Diddy put a list of all Biggie tracks (the real, the remixes, the fabrications and all) on the wall, got rip-roaring drunk, and started throwing darts in all directions. Once Ma$e and Black Rob plucked the strays out of their backs, “Greatest Hits” was done. It’s perhaps the most fitting tribute of all to Biggie that an album whose conception and organization seems to be complete nonsense is still as damn good as it is, and only fails to score higher because it’s not the fitting tribute to Christopher Wallace it COULD have been. Ten years after his death I’m still waiting for that album.