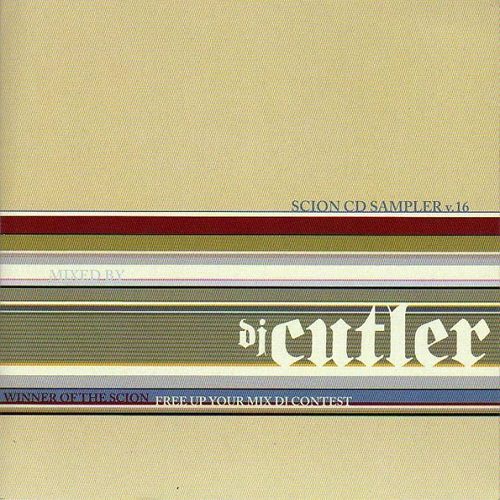 A “Scion CD Sampler” doesn’t exactly sound engaging. Outside the idea that “Sampler” isn’t the most exciting of titles, we are indeed talking about THAT Scion. As in, the latest brand of Toyota vehicles Scion. Whatever in God’s name inspired Toyota to try their luck at underground hip-hop is well above and beyond my understanding, but one way or the other, their Audio/Visual team offers more than your standard stereo system. Mixed and cut up by Buffalo’s own DJ Cutler, what is apparently the 16th volume of the series is a surprisingly outstanding blend of some of the underground’s finest and most underrated acts.

Cutler’s scratching is good, but doesn’t match the gritty appeal of Premier’s “New York Reality Check 101,” nor can it fuck with the manic turntablism antics of the Beat Junkie crew. Such comparisons are unfair, but luckily for the maestro, mood is easier to emulate than sound. That said, the sampler is an extremely pleasant journey musically. Decidedly jazzy and extra mellow, all the accompanying breakbeats are complimentary and funky, many hooked up by some of the heavyweights of the indie scene.

Cutler’s merging of Maspyke’s “Step” into People Under The Stairs’ “Tuxedo Rap” is both seamless and impressive, scratching “break it down” into the increasing volumes of the Michael Jackson sample. Better yet is the latter’s remix with Time Machine and Shawn Jackson, where the central melody becomes interchangeable with a new psychedelic loop. Optimus Prime’s “Work It Out” and Ugly Duckling’s “Einstein’s Open Mic” are blended to make their very own song, and Gr& Phee’s “Do The Math” is like “Enta Da Stage” revisited.

The painfully underrated Kev Brown is represented well with “Struggla’s Theme,” a banger that hits a balance between rough and smooth, reminiscent of mid-nineties Pete Rock. Coincidentally enough, Grap Luva of InI guest stars, but Brown steals the show with the beat AND the rhymes. Cutler then does a fine job in merging that into Pseudo Slang’s jazzed out “Broke and Copasetic.” And clearly, major label support and backup from 9th Wonder is what’s been separating Tanya Morgan from the success of Little Brother. Emcees Von Pea, Ilyas and Donwill are smooth as hell over their booming snares, while their wordplay often matches that of Phonte.

Third’s “Traveling” and Ajent O’s “Infinity and Beyond” are placed back to back, curiously enough. The former pokes fun at old school throwback acts like Jurassic 5, while the latter embraces the increasingly cliched idea that hip-hop should forever sound like it did in 1994. While both of these songs are more than decent lyrically, it should be noted that for the overwhelming majority of the album, the beats steal the show. The good thing about this is that it doesn’t matter – this mix is for nodding your head, not using it.

Especially considering the number of artists featured, Volume 16 of the Scion Sampler series is freakishly cohesive. Credit is certainly due to Cutler, who handpicks an outstanding selection of beats by some of the underground’s finest and most underrated talents. Bump it in your Scion, bump it in your ice cream truck. However you listen, it’ll have that bump.