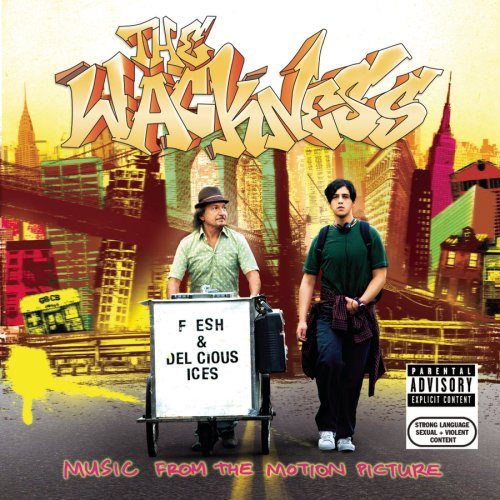 It’s very hard to critique a soundtrack without having seen the film. All I know about the film that this soundtrack is from, The Wackness, is that Ben Kingsley’s in it, which is basically worth the price of admission alone. The soundtrack itself is dope, as well. Peep the track list alone, and you’ll feel like you were in a time warpâ€”especially considering that four of the thirteen songs are from Bad Boy’s catalogue, as well as two from Wu-Tang’s glory days. It’s a very good collection of ’90s Hip-Hop and R&B.

On the Hip-Hop side of things, the song selection is relatively unorthodoxâ€””The What,” Biggie’s collabo with Method Man (who, with the exception of the writing credits, is not at all acknowledged anywhere in the CD’s information), is included, as well as the ORIGINAL version of Craig Mack’s “Flava in Ya Ear.” I haven’t heard it in a long time because I personally prefer the remix, and I’d forgotten how truly dope Craig comes on this joint:

“Just…like… Uniblab, robotic kickin’ flab
My flavor be the badder
chitter-chatter
Madder than the Mad Hatter
I bet you my shit come out fatter
got the data
to turn your body into antimatter {…body into antimatter…}
And just like a piece of sizzlean
you’ll fit inside my stomach
with the eggs and grits between {…take ’em down, Mack…}
The King is what I mean
I mean
my man get a cup
and put some change inside your hand {…take ’em down, Mack…}
Now hold up
let’s make this official {…make it official}
everybody let’s agree that M.C.’s need a tissue {..wake ’em up}
The funk’s my only issue
I bet your mama miss you
and I bet the Mack take off like an M.X. missile
No more of your whining
on the charts climbing
as I make the funk
kickin’ out more harder than a diamond {…harder than a diamond}
And if you didn’t know who’s rhyming
I guess I’m gonna say Craig Mack
with perfect timing”

KRS’s “I Can’t Wake Up” is on here as well, which is definitely a treat, as well as Nas’s “The World Is Yours.” Tribe’s on here (“Can I Kick It?”) alongside Raekwon and the Wu-Tang Clan (“Heaven & Hell” and “Tearz,” respectively), with Biz Markie’s “Just A Friend” rounding out the quality Hip-Hop on the track list. The most conventional song choice for this throwback jam is DJ Jazzy Jeff & the Fresh Prince’s “Summertime,” but the song is so classic and well-interwoven with the vibe of the compilation that it really doesn’t matter.

The R&B tracks are dope, as wellâ€”Total’s CLASSIC remix of “Can’t You See” with the Notorious B.I.G. is included, which is ESPECIALLY nice considering that I haven’t heard it since I was in the fourth grade. Biggie’s verse is crazy, and the beat absolutely KNOCKSâ€”the guitar licks of James Brown’s “The Big Payback” add some funk for Frank White to vibe to as he drops one of his illest verses:

“Give me all the chickenheads from Pasadena to Medina
Bet Big get in between ya
Then pick the prognosis, doses
Blends and bends like Twizzlers
Biggie’s fitting to hurt
What’s under that skirt?
(Slow down, son, you’re killin us)
Who fillin ’em with octane?
Got ’em gassed up
‘Bout to get blast up, sup
The last one, word to your mother
Brother, listen
I’ve seen it when he kissed ’em at the way
Made his body shake
The high tide it 8 50 I’s smoke tank
Rap terror whore crow and terror, true
Fly by the rivers but this is conspicuous
Bad Boys slipped in ninety-five ridiculous
My rap’s rhymes is like land mines
One step, ka-boom, black suits fill the room
To whom it may concern, Junior Mafia’s the click
Act up, I’ll have my honies Total bust your…”

Faith Evans’ “You Used to Love Me” is a choice selection, as well as The Pioneers’ reggae track “Long Shot Kick De Bucket,” which adds some much-needed variety to an album that’s heavy on slickly produced Hip-Hop and R&B.

Then I heard R. Kelly’s “Bump ‘N Grind.” WHAT THE FUCK?!?!?! Granted, I know that since I haven’t seen the movie, I don’t really know the context for it, but stillâ€¦one of THE most played out songs in the HISTORY of music amidst golden age Hip-Hop classics? It’s mind blowing. Someone should fire the executive producers JUST for that colossal blunder.

Other than the inclusion of Mr. Kelly’s voice on the soundtrack, the only other criticism that I have is that there are no revelations on this CDâ€”there are no rare, unheard remixes of classic songs, no new joints from some of these older heads, and CERTAINLY no new talent is discovered.

But other than that, the soundtrack is actually pretty decentâ€”a nice little mix of records that definitely capture the throwback vibe that the flick’s producers were trying to go for with this compilation. The film may be The Wackness, but it’s music certainly isn’t.