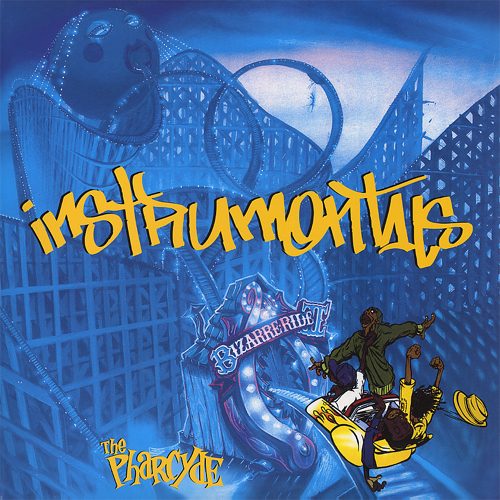 After a pleasant trip down memory lane thanks to Jordan Selbo’s Back to the Lab review of “Bizarre Ride II the Pharcyde,” I stumbled across this curiously concocted compilation at my local mom & pop record store. Why curious? Because if you were to judge by the Plain Rap” was released. The group’s membership and status in the hip-hop world has shrank since to almost non-existence, dropping ever-more obscure albums on even tinier labels with little to no distribution. In truth the label they want nothing to do with has done a better job of keeping The Pharcyde name alive than they have, working with Best of the Pharcyde” DVD as well as putting out this interesting CD simply titled “Instrumentals.”

Now if you read Selbo’s review, you’re aware that he gave the music from “Bizarre Ride II the Pharcyde” a 9.5 out of 10. (If you’re not aware, go read that shit right now and come back – I’ll wait.) The only difference between Selbo’s review and my own is that I might have rated it HIGHER – a perfect ten. The first half of “Instrumentals” is all songs culled from this album, and as good as the raps were/are it’s SUCH a pleasure to hear these musical masterpieces presented on their own. J-Swift will probably never get the recognition he really deserves for these fine beats. “Oh Shit” is a swinging rambunctious piano-infused joy, “4 Better or 4 Worse” is the somber backdrop to Pharcyde’s tale of relationship woes, “Ya Mama” rocks a sample from “Seasons of the Witch” to great effect; if you can find the “Super Session” album reissue this loop is culled from (by Bloomfield, Kooper & Stills) you should pick it up too. Even the selection J-Swift didn’t produce jams; the L.A. Jay and Slimkid Tre organized “Otha Fish” shuffles and slides along a Herbie Mann loop that’s horny horn when needed and subtle when it’s not.

On this album’s second half, which culls eight instrumentals from the underrated “Labcabincalifornia” album, it’s more of the same fresh beats. It’s a bit sobering to note the role Jay Dee/J Dilla plays here, producing tracks like the low key “Bullshit,” the up-tempo and infectious first single from the album “Runnin’,” that single’s inventive and hardcore reversed beat “Drop” b-side and the plucky bass strings of “Somethin’ That Means Somethin’.” Fans of the late great producer may want to cop this album just for the opportunity to own pristine versions from four of the best tracks he ever made. “Labcabincalifornia” was something of an all-star effort all around with Diamond D lacing up “Groupie Therapy” and Fat Lip himself orchestrating “Devil Music” and working in a great Wu-Tang Clan sample in the process. Even though M-Walk has no entry in the hip-hop world before or since, you have to give it up to him for “The E.N.D.” too, as I could listen to the jazzy construction built on Earl Grant’s “Sunny” all day long on loop.

What’s the bottom line on “Instrumentals” then? Quite simply, this album is not enough. Instead of picking half of one Delicious Vinyl release and half of the other, the label should have gone all out and released an ENTIRE instrumental of each Pharcyde classic. It’s not like “Instrumentals” was marketed or promoted anyway, and if you can find it on their own website more power to you. They certainly couldn’t have done any worse with two seperate CD’s, and in fact they could have packaged them both together in a dual-tray for a few dollars more and kept the name of the album exactly the same. There’s little question though that “Instrumentals” is worth every penny of the price, if you can find it at any retailer near you. If you’re depressed with the modern era of hip-hop and looking for something a little more light and refreshing, or just want to enjoy some jazzy, funky, swinging and grooving beats, or if you’re a DJ who wants more beats to put in the mix or use to perform tricks, “Instrumentals” is right for you.