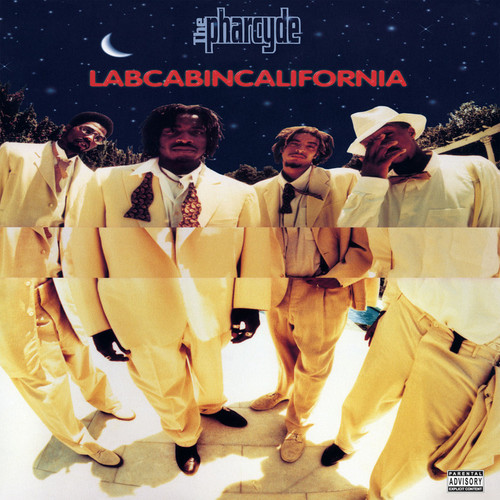 The Pharcyde burst on the scene in 1992 with their debut “Bizarre Ride II the Pharcyde,” an album that remains one of hip hop’s most purely entertaining records to date. A shameless celebration of immaturity featuring odes to teacher crushes, masturbation, prank calls, police evasion, smoking weed, and “ya mama” jokes with rich, danceable grooves courtesy of producer J-Swift that would have been equally at home on a Saturday morning cartoon as on a rap LP, the Los Angeles quartet managed one of the early ’90s most unlikely classics. Featuring four massive characters in the shrill Bootie Brown, the recognizably melodic Slimkid Tre, the hilarious Imani Wilcox, and the lovable motormouth Fatlip, “Bizarre Ride” was a comedic masterpiece that helped set the stage for a generation of alternative rappers inspired by their singular combination of wild humor, superb technique, seamless chemistry, and bold artistic approach in spite of their familiarity with the world so many of their South Central neighbors rapped about. Beneath the unabashed goofiness and upbeat pace of the debut, the rappers also impressed with a rare introspective side evident on singles “Passin’ Me By” and “Otha Fish,” indicating a versatile group if ever there was one. “Bizarre Ride” hardly took itself seriously enough to pose the West Coast’s answer to the Native Tongues, but its conscious rejection of gangsta rap stereotypes in favor of a more musical, comically reflective, brashly creative alternative was akin to their said East Coast contemporaries.

A long three years separated “Bizarre Ride” from the group’s heavily anticipated sophomore effort “Labcabincalifornia,” but listening to them one might think an even longer gap separated the two. If “Bizarre Ride” was a triumph in juvenile exuberance, then “Labcabincalifornia” is its wiser, contemplative, tasteful counter. Consistently smooth and fairly experimental, “Labcabincalifornia” is a well selected title in that it sounds like the product of an episode in which the group and its producers locked themselves up in a backwoods lab or cabin armed with recording equipment and a few weeks’ supply of marijuana. The appealing interludes are often nonsensical, sounding like unpolished studio outtakes or renditions abandoned halfway through. The group members make a wildly successful move behind the boards, handling a good portion of the production themselves, and while J-Swift is nowhere to be found (fear notâ€”he’d return for 2000’s follow-up “Plain Rap”), they are abetted by Diamond D of D.I.T.C. fame, M-Walk, and a young Detroit producer by the name of Jay Dee who would soon lend his talents to A Tribe Called Quest, De La Soul, and Slum Village before becoming a household name. As Jay Dee’s coming-out party it’s absolutely brilliant, as his soulful midtempo grooves appear simple on the surface, yet further analysis indicates a complexity completely befitting of the genius we came to know him as. His smooth basslines, sturdy, crunchy percussion, hauntingly-balanced vocal arrangements, and whimsical beat structures are imminent throughout the album’s highlights, proving brightly evocative yet simultaneously embodying the hazy, mysterious nature of much of the record. Neither distinctly reminiscent of his native Detroit or the Pharcyde’s Los Angeles, the music throughout “Labcabincalifornia” assumes a sound that knew no regional characterization besides sounding fresh, souful, and, dare I say it, alternative.

Although many songs have a smoky, spontaneous vibe and boast a liberal degree of musicality, the Pharcyde are, as the chorus of track seven repeats, out to “kick somethin’ that means somethin'” on “Labcabincalifornia.” This is ironic in that, perhaps despite its best intentions, “Bizarre Ride II the Pharcyde” was quite meaningful and substantialâ€”an effective and honest, if lighthearted, commentary on being young, black, and Californian in the years of Rodney King, the Los Angeles Riots, George H.W. Bush, “Boyz n the Hood,” and “AmeriKKKa’s Most Wanted.” “Labcabincalifornia,” then, is split between focused, personal accounts and harmlessly experimental numbers, resulting in an appealingly balanced tracklist. The lusciously smooth opener “Bullshit” tells the listener to “get up off of that bullshit and stop fightin’ that feelin’,” while the second track, simply titled “Pharcyde,” features all four MCs getting busy over a dope beat produced by Bootie Brown.

Diamond D laces the immensely clever “Groupie Therapy,” a study in integrity and deception in relationships. This sort of serious introspection was new territory for Pharcyde but proved quite successful, and another case in point is the timeless single “Runnin’,” a classic that has ensured “Labcabincalifornia” remains in print for the foreseeable future. Jay Dee’s beat is a veritable masterpiece with winding chords, a brilliant sax break, and a clever Run-D.M.C. vocal sample, and the group incorporates smart harmonizing in the chorus. The first two verses recall problems in high school and how they inspired Fatlip and Slimkid to confront their problems rather than run away from them, culminating in Imani’s closing bars:

“It’s nineteen-ninety-five, now that I’m older
Stress weighs on my shoulders, heavy as boulders, but I told ya
‘Til the day that I die I still will be a soldier
And that’s all I told ya and that’s all I showed ya
And all this calamity is rippin’ my sanity, can it be
I’m a celebrity who’s on the brink of insanity
Now don’t be wishin’ of switchin’ any positions with me
‘Cause when you in my position, it ain’t never easy
To do any type of maintaining ’cause all this gamin’ and famin’ from
Entertainin’ is hella straining to the brain and…
But I can’t keep runnin I just gotta keep keen and cunnin'”

The sly soul of “She Said” supplies another standout, as the MCs assume both rapping and crooning duties upon a sultry Jay Dee gem. Dilla also shines with his bright vibes and keyboards on the smoked-out “Splattitorium” and the aforementioned “Somethin’ That Means Somethin’,” a frenetic yet impossibly tight groove that induces serious head nodding.

“Drop” was a well-selected first single because it showcases the new Pharcyde sound brilliantly, with a low-key, futuristic Jay Dee beat, harmonized chorus, and conscious, artistically-arranged verses delivered in stuttered, unorthodox bar structures for a seriously dope track that is quite indicative of the album as a whole: more inventive musically and conceptually ambitious than the debut, yet with the same energized performance and chronic-induced charm. Although Slimkid produces “Hey You,” his chops are perfectly in step with Jay Dee’s, making for another soulful, abstract winner with distant vocals and impeccably penned verses, including Slimkid’s own:

“Beam me, beam me, beam me, beam me up Scotty
Not as to where I have no control of my body
Tweaking diodes, I walk the roads like karate masters
Most the time my mind be ghost like Casper, sinkin’ faster
But coming up in this shit
Sometimes I’m alienated, underrated, suckas hate it that I made it as a misfit
But you know if the shoe fits Im’a wear it like a glass slipper
Hike to the big dipper dip like a skipper not top could be tipper (say what?)
But fools be tryin’ to rape friends to make friends
And that’s one big twisted ass picture, like Jack the Ripper
Caught up in the net like Flipper on a tuna protest
Yeah, where’s the focus got me fuckin’ with these friends
And they’re crackin’ my lens, and now shit be’s foul as a mutha
Word to my sistas and my brothas and my color”

“Y?” is spectacular musically and lyrically, featuring wonderful arrangement and particularly cerebral verses from all four members. Fatlip asks “the proverbial question” in his closer:

“I jumps inside the Jeep as I embark on my dark mission
Popped in my freestyle tape, start reminiscin’
‘Bout my little homey who was raised in Wyoming
Wanted to be famous, so he came to Californey
On the microphoney, was superbad and whatnot
But he was the kind o’ fella to follow paths that was hot
He became so fascinated with that gang-related flavor
That he modificated, rearranged his behavior
He hooked up quick with the influential slang
Gangsta stroll, cornrows, the whole shebang
Braggin’ and boastin’, boastin’ and braggin’
How we ‘posed to be hangin’ with baby Gs, I was baggin’
Like, ‘Why you tryin’ to hoo-ride up on the bandwagon?’
Hopin’ they’d hit him in the head, but he steady saggin’
Like he a hog creepin’ through the smog
Smokin’ on some indo sippin’ on a cup of O-Dog
Like most who come to this West Coast society
Try to be because they think it’s fly to be a menace
So what a relic way to end this
Got rolled up when he was strolling on a Sunday up in Venice
Niggas never listen, they gotta learn their lesson
The hard way I’m guessin’, yes and
BD as I hit the B and make a right on Wesson
Pops in my head the proverbial question, why is that?”

“Moment in Time” is one of the record’s most charming pieces, reminiscing on lost family and poignantly discussing life’s fleeting nature. After the likable posse cut “The Hustle,” the LP closes with two absolute gems in “Devil Music” and “The E.N.D.” The former is a vibe-heavy track where the Pharcyde notes, “Every time I step to the microphone, I put my soul on two-inch reels that I don’t even own”:

“Early Saturday mornin’ I was cartoon gazin’
Slowly broke into the kitchen to fill a bowl full of Raisin
Bran, as I ran up and down the TV stations
I witnessed Indian Joe getting tricked out of his nation
By a silly hillbilly who laughed as the shit happened
Everything’s the same, the game continued into rappin’
Deception is at an all-time high
You give a piece of your soul to receive some crumbs from the pie
But you know I keep on rappin’ until the break of dawn
Even though it is my soul that I do not even own”

The sunny pipes and muted trumpets of “The E.N.D.” give way to a bright, cheerful rendition as the rappers implore of the listener, “This ain’t nothin’ but the E-N-D, so follow me into the sun and let your soul be free.”

Years ahead of its time for a scene still hung over from “The Chronic,” “Labcabincalifornia” was an underappreciated album that would almost certainly have fared better amidst the alt-rap renaissance of 1999. In the wake of its slept-on brilliance Jay Dee managed to become one of hip hop’s most lauded producers, while the Pharcyde in turn gradually crumbled, losing members to ill-fated solo careers until 2004’s “Humboldt Beginnings” found them reduced to an herb-riddled duo. Today it remains a virtually flawless record that’s essentially skip-free. One can get completely lost in Jay Dee’s hypnotic production and the smoky interludes, and the rappers turn in seventeen tracks worth of vocal brilliance via introspective memories, coming-of-age philosophizing, abstract musings, and good-natured b-boy experimentalism. Never returning to the creative peaks of their first two albums, it’s almost easy to cite the Pharcyde’s untapped potential, but given the sheer quality of their freshman and sophomore efforts, especially considering their disparate substance, it’s tough to imagine what further heights they may have reached. “Labcabincalifornia” finds a phenomenal group of young rappers at their creative finest and a group of superb producers led by a young Jay Dee collectively channeling a focused, indubitable sound that the West Coast had never seen and hasn’t since.