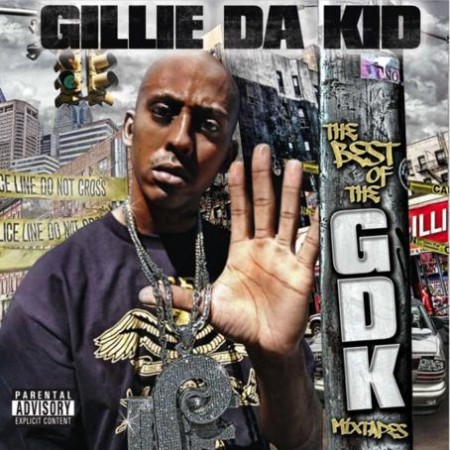 Gillie Da Kid :: The Best of the GDK Mixtapes

Gillie Da Kid is the most average rapper I’ve ever heard. I’ve been trying to figure out a nice way to say this, but sometimes it’s better to just come out and say it: the “Best” of Gillie Da Kid isn’t very good. GDK, as he will be referred to from here on, is a rapper you’ve heard a hundred times over, on the radio, on the street, even if you’ve never heard his voice before; he has absolutely nothing to say. I wish him all the success in the world; for a rapper this generic to have a “Best of” compilation means he must be an extraordinarily hard worker. But ultimately, GDK doesn’t give you any reason to buy this album.

“The Best of the GDK Mixtapes” isn’t even that bad of an album. First off, the production bangs through most of the album. It’s not great, but if you have a good set of subwoofers, this CD has some pretty exciting moments, namely “I Love Being a Gangsta, Part 2,” and “Sucker Free,” which features a simple piano and drum loop, that is nonetheless effective.

And GDK isn’t even that bad of a rapper, in his deliveries or techniques. He flips two to three syllable rhymes effortlessly, and tackles the quick speed Jay-Z rip off (which is a recurring theme) “Figga What, Figga Who” without losing a step, at least until his Figga crew ruins the track. The problem is, GDK is a black hole thematically. He never once strays outside of the basic “I’m real, you’re not; I’m rich, look at my chain” topics, or approaches them in a creative way. From the moment you hear the Jay-Z sample in “Holla Back,” GDK greets you with one played out idea after another.

“Nigga holla back, nigga holla back!
I put the pistol in his mouth and told him “swallow that”
I done been to Hollywood and to the block and back
I know you’re ice when I see it, what type of rocks is that?
[…]
I’m a B-O-S, with an “S” on that
It’s twenty-four hour paper, ain’t no stress on that
These niggas talk it but don’t live it, where your weap-on at?”

GDK borrows heavily from Jay-Z, but possesses none of his depth or personality, and half his talent, like most of the other Jigga imitators. And that really is the problem, there’s no reason to buy an album from him, even this “Best of” you won’t turn it off in disgust, but he doesn’t offer anything different than what can be heard on the radio station thirty times a day, or what hundreds of underground artists trying to break out are already doing.

This is made all the worse by the guests present on the album, which are to GDK what he is to Jay-Z. As weary as you’ll get from listening to GDK’s endless posturing, you’ll be dying to hear him spit about nothing once you hear the first guest rapper on “Papers Line” They’re present on 10 of the album’s 13 tracks, which drags the album from average to just bad, lyrically. They ruin enough of the songs to warrant a paragraph on their own.

In the end, the few highlights of this album, “Friend of Mine” and “I Love Being a Gangsta, Part 2” are no reason to buy this album. You’re not missing anything by not getting GDK’s “Best of,” it utterly fails to establish any type of identity or hype for the largely unknown GDK. Hopefully, GDK grows as a rapper and achieves the success he so clearly aches for. Don’t hold your breath.