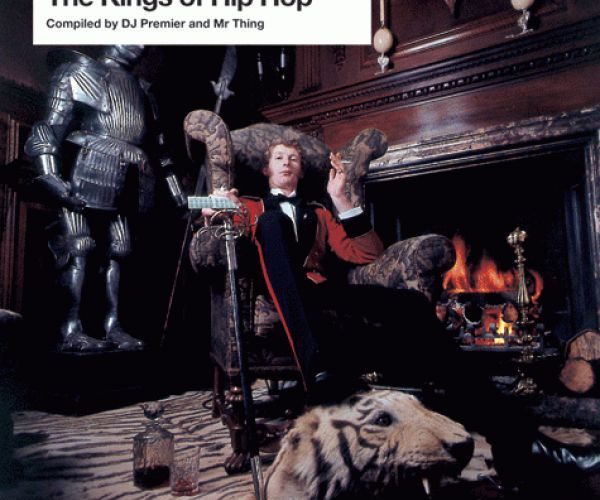 DJ Premier and Mr. Thing :: The Kings of Hip Hop

This album requires a little clarification right at the start. First and foremost even though DJ Premier could certainly declare himself a “King” after two decades of some of hip-hop’s best beats, neither he or Mr. Thing are the actual “Kings” referenced in this album’s title. In fact for the first disc of this two-disc set, there aren’t even any hip-hop artists as you would know or refer to them participating in the mix. So what’s going on here? Well the dynamic duo in question who organized this album have decided to pay tribute to some of the most important beats and rhymes of hip-hop in their own unique way, by breaking things down to their organic compounds.

The Primo produced disc one is simply entitled “Breaks” and the name fits like a glove. If you get deja vu listening to these songs, which Premier presents with a minimal and completely appropriate measure of turntablist manipulation, there’s a damn good reason for it. These may have been the songs your parents jammed to when they were your age, but you’ve danced a few steps and snapped your fingers and necks a few times to them as well. Very few of the titles listed will betray the more famous hip-hop songs you know them from except perhaps for Heatwave’s “Ain’t No Half Steppin’,” but I guarantee you will recognize the beats behind the rhymes you love. Screamin’ Jay Hawkins’ “I Put a Spell On You” will instantly bring to mind Notorious B.I.G.’s “Kick in the Door.” Grover Washington Jr.’s “Mister Magic” was used several times by DJ Jazzy Jeff & the Fresh Prince, as well as forming the classic break behind Salt-N-Pepa’s “My Mic Sounds Nice” among others. The list of songs taking breaks from Ohio Players’ “Skin Tight” may be even more extensive, but just to fuck wit’cha head I’ll cite one of my favorites as being “I Let ‘Em Know” by Young MC. Yeah that’s right, you heard what I said. If you love break records, classic old school soul or both, the first disc will be right up your alley. In fact you can turn it into a drinking game with you and your friends, playing “name that hip-hop” song each time you hear a snippet that you know or remember from somewhere else.

Mr. Thing’s half of this set, titled simply “Hip Hop,” is a somewhat odd collection of rap tracks, varying wildly from obscure and underappreciated hip-hop greats to commonplace songs nearly every DJ would have in their crates, along with admittedly dope songs that I have a hard time imagine getting play outside their original album’s playlist. Smif-N-Wessun’s “Sound Bwoy Burreill” would be an ideal example – never released as a single and a little too hardcore for radio, which makes it even more odd that the version presented here appears to be censored. The inclusion of the very rare “Sh.Fe.MC’s” by De La Soul from their promotional “Clear Lake Auditorium” release is greatly appreciated, but why did Mr. Thing double up the De La Soul love with the FAR more widely distributed “The Bizness” featuring Common Sense? You can’t complain about including classics like “Punks Jump Up to Get Beat Down” by Brand Nubian, although Mr. Thing tries to be a little too clever with juggligng the beat instead of just letting the track present itself naturally. Another curious case of double dipping is Main Source, and while their importance to hip-hop has always been grossly understated it makes no sense to include both the commonplace “Peace is Not the Word to Play” only two tracks away from the seminal “Fakin’ the Funk,” ostensibly the last song they ever did before Large Professor split from the group to go his own way. With no disrespect to Ol’ Dirty, why putBOTH “Shimmy Shimmy Ya” and “Brooklyn Zoo” on here, especially when a whole legion of ODB, Wu-Tang, and hip-hop fans would have long since had these tracks, especially when you consider they’re the first two songs on “The Definitive Ol’ Dirty Bastard Story?” It’s not as though Mr. Thing’s disc isn’t enjoyable, it’s just totally nonsensical.

Taken as a whole “The Kings of Hip Hop” was a good idea in concept, but not quite so well done once it came down to the actual execution. Mr. Thing could and SHOULD have done a whole lot better with his “Hip Hop” half of the selection, and his skills as a DJ are really not up to par to the point he should be showcasing them instead of the actual songs he picked. While DJ Premier’s “Breaks” half fares much better, it’s still going to be a hard sell for hip-hop fans given there’s not a “cheat sheet” of any sort and today’s generation of listeners aren’t going to know (or care) that artists like The Brothers Johnson and Percy Sledge are responsible for the beats behind some of rap’s all-time great hits. Combine these facts with a relatively high price for a dual-disc set, which this writer only justified by the fact DJ Premier was involved, and you’ll find many people passing over what could and SHOULD have been a much stronger release. “The Kings of Hip Hop” should have been renamed “Two of a Kind, Ace High Kicker.”