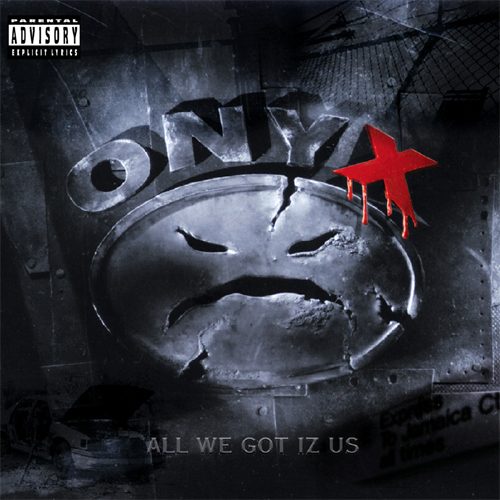 All We Got Iz Us

This is my ode to black. Busted up street lights. Greasy Timberland footprints in deserted alleyways. Moonless skies. Grinning teeth reflecting on the barrel of a Glock automatic. Merciless goons running these streets. Hope they pass you by without seeing you. “All We Got Iz Us.” They live by that. You die by it.

“South suicide Queens….all niggaz
Gather up all your arms
And get ready for this new world order
Shit is about to change, motherfucker”

On October 30th 2002, Run-D.M.C.’s one-man band Jam Master Jay was shot and killed inside a recording studio on Merrick Boulevard in Queens, New York. Almost ten years earlier, it was this legendary DJ who first discovered four bald-headed goons roaming the evil streets of that same neighborhood. After releasing their successful debut single “Throw Your Gunz Up” with Jay’s help, the world was officially introduced to the wildly aggressive group called Onyx on their Def Jam debut “Bacdafacup.” The second single of that album, “Slam,” became a success of global magnitude. The grim ‘New World Order,’ which the MC’s referred to in their lyrics, seemed imminent.

“Thinking about taking my own life
I might as well
‘Cept they might not sell weed in hell
And that’s where I’m going
Because the devil’s inside of me
They make me rob from my own nationality
It’s kind of ignorant
But yo I gotta pay the rent
So yeah, I’ll stick a nigga most definite
Because it’s generate
If I get caught I’m innocent
Because I don’t leave no sticky finger prints
For the cops they only good if they dead
All that badge and that gun shit be going to their head
To make bread I gotta steal for sport
So I stole the show and sell some pennies for my thoughts
And if this fucking rap shit dont pay
I’ma start selling drugs around my way
Killing my own people in the U.S.G.
Shit they gonna get it from somebody
I’d rather it be me”

In Onyx’ New World Order, everything is upside-down. Black is white, bad is good. Suicide? No ultimate shame, but an honorable way out of a shitty situation. People? Either bitchassniggas or punkmotherfuckas. The first group can get a bullet in the back, the second can get it in their grills. History? Miserable Slavery and rape of great-grandmothers by greedy plantation owners. Music? Selling drugs to your own people is more profitable. Future? Drop the microphone. Drop your principals. Who needs morals when you’re living in hell already?

“Bacdafucup” mentioned the Order’s dark utopia already, but it was “All We Got Iz Us” that truly unfolded Onyx’ vision. Big DS, one of the founding members, had been kicked out of the group. Supposedly because he was in jail. No one knew exactly. It left Onyx with three soldiers to establish the Order from within the United States Ghetto (USG) they talked about so often. They were: Fredro Starr AKA Never, Sonee Seeza, and Sticky Fingaz, whose liner notes in the black album booklet reads:

“I ain’t got love for nobody. ‘Cept my moms who I’d die for.
My little sista Kashia and my little brova Reggie who I’d kill for.
Fuck my pops and da cops, they don’t deserve 2 live 2 witness
niguz like me change da new world order 2 no world order.”

The three growled their lyrics into the mic like they were regurgitating infected bile. Humourous intermezzos, like “Phat (‘N’ All Dat)” on “Bacdafucup,” had been eradicated. This was vicious business. The three MC’s spit out words so violently, like on the ominous “Betta Off Dead,” it was sometimes hard to make comprehensible words out of the gurgled vowels. Especially Sticky Fingaz, whose voice makes DMX sound like a frigid poodle, looked and sounded like America’s nightmare in the flesh. The NAACP even went so far as to declare him and his cronies ‘a disgrace to blacks.’ Onyx knew and loved every second of it.

Whereas the late Jam Master Jay had some musical control over their first LP, production on “All We Got Iz Us” was now fully maintained by either one of the Onyx members. The lack of trust in outside influence resulted in a strange combination of meant melancholy and sheer aggression. Once hopeful rhythm and blues and sentimental soul music were transformed into bareboned black bass, dissonant snares, and faded voices. None of the songs on “All We Got Iz Us” aimed at getting radio play. Onyx later declared they were proud of an underground album selling so good without the desired broadcast time.

When “All We Got Iz Us” came out, it was buried in darkness by a pile of classic 1995 records. Mobb Deep talked shook ones on “The Infamous.” Big L got flamboyant on “Lifestyle Ov Da Poor & Dangerous.” Raekwon explained cocaine on “Only Built 4 Cuban Linx.” Ol’ Dirty shimmied his swagger on “Return From the 36 Chambers.” The Roots got live on “Do You Want More?” Group Home premiered with “Livin’ Proof.” 2Pac uttered it was “Me Against The World.” In the end “All We Got Iz Us” sold 500.000 copies, but it never came anywhere near the success of the first album or other contemporaries.

“FUCK PEACE I want justice
I’m a nigga with a gun in the right, mind to bust this
Fuck this – I’m mad at the world and hell, I got a vengeance
My first offence, I caught the life or death sentence
The real black homies in jail, pull out protection
It’s killin me, callin these facilities, correction
System that is scared of us, come on my fellow prisoners
Time to go to war; we’ll be dead at least they listen to us
Time to get the Tec, and go step, to the President
U.S.G. citizen, fuck American, resident!
And nnyyaaa, I gotta seek your betterment
Isaac, slayed, for all my niggaz who got HANGED!
{*DJ cuts and scratches “So throw ya gunz in the..”*}
They said “Throw Ya Gunz” was negative, I say FUCK THEM!
They the ones who put the guns in the ghetto for destruction
This is depression, deception, killin’ our own complexion
What we need to do, is point the guns in the right direction
Now..”

Onyx’ career started out with a bang. “Bacdafucup” was their biggest commercial success. “All We Got Iz Us,” to me, was their biggest artistic success. The consistency in words and beats left an imprint on my brain. The tainted black smile on the artwork left an imprint on my retina. After that finest moment, their evil shine slowly faded to black. The promised New World Order remained on the shelf. But still: they must be bumping this in Hades, al-Jahim, Di Yu, Xibalb?, and Dante’s Inferno. Maybe this album will get its due props after all. Hell is fuller than heaven anyway.