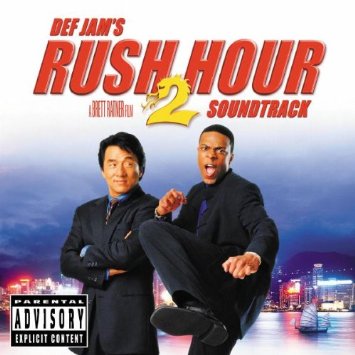 Given that the film “Rush Hour” was a big commercial hit for Chris Tucker and Jackie Chan, it’s no surprise that New Line Cinema got a sequel in theaters as fast as possible. Given than the soundtrack for “Rush Hour” was a big commercial hit with songs like “Can I Get A..” by Jay-Z, “Faded Pictures” by Case and Joe, and “How Deep is Your Love” by Dru Hill and Redman, it’s no surprise that Def Jam got a movie soundtrack in stores as fast as possible too.

As of the writing of this review, they have already succeeded in scoring at least one major hit with “Area Codes” featuring Ludacris and Nate Dogg. Seperately it seems like they’re on every hit song in recent memory, but together they complement each other like a ready-made duo. Nate’s silky chronic’d out singing and the humerous “every day is a hoe-liday” style rhymes of Luda would catch heads alone, but the real clever trick is shouting out every phone call zone known to man. East to West heads are bound to pay attention to the track and throw their hands up when their own hood is repped. (Even Flash Web Design Exclusive can take pride, because our four-oh-two got a shout too!) Some may view it as cheap, but if you just go with it and have fun, it’s all good.

The next three tracks may or may not have the same hit potential. Montell Jordan usually scores on a soundtrack and his “Mine, Mine, Mine” has an interesting beat that’s part thugged out bass and part smooth sensual piano ballad – whether this will make sense to radio programmers is anybody’s guess, but it’s an appealing song. Moreso anyway than the unfortunate “Party & Bullshit” by Method Man and T.R. If any rapper could have carried Notorious B.I.G.’s legacy by doing a track of the same name, it would be him – but it has none of Biggie’s flavor or flow. The beat is a synthetic high speed equivalent of scratching nails on a blackboard; and T.R. is not impressive enough to be doing a duet with an industry vet. Following this with Kandice Love is ironically appropriately though since the cut is called “No.” Her themes of self-respect are worthwhile but have been better done by everybody from Destiny’s Child to Monica; so “no” we don’t need to hear it from a weaker singer who is more Cher than Mary J. Blige over run-of-the-mill beats.

Fortunately, Keith Murray blows all this shit out of the water with the track “He’s Back” thanks to a re-energized flow (much better than his rap on Redman’s “Malpractice”) and a fat-ass Rockwilder beat. If this is any indication what a new K.M. solo album would be like, fans and hip-hop heads alike will definitely be pleased:

“I’m not an R&B pop star rock’n’roller
I’m an underground rapper with a chip on my shoulder
You mindless, spineless, jellyfish I eat MC’s..
.. which is my favorite dish
I sail the seven seas, pack ’em in like sardines
and eat fruit right off the stress tree
Keith kill beef like Mad Cow Disease”

Unfortunately this album seems to have failed to capture the spark of it’s predecessor, as songs like these are packed around too many mediocre cuts. The insipid “Love Again” by Dru Hill with Jazz and a normally refreshing Jill Scott just kills any buzz that you had. This is followed by what may be the album’s other true crossover hit, the smooth R&B track “Keep it Real (Tell Me)” by Musiq with excellent rap verses by the Funk Docta himself, Redman. This is then followed by one of the worst LL Cool J tracks in memory, the SEVERELY misguided “Crazy Girl” with Mashonda. The track actually sounds like it got bunched up in the reel to reel as the backdrop wavers in and out – a technique that only the RZA should even try to use. This wouldn’t be half as bad if LL didn’t go from a sing-song flow to a rapid fire monotone with no warning; both sounding equally horrendous. After releasing the mostly excellent “G.O.A.T.” LL nearly wipes out all his restored credibility with this one awful song.

After another insipid R&B song in the form of Lovher’s generically titled “How Its Gonna Be”, a strong rap track from underrated West coast veteran WC called “Paper Trippin'” gives the soundtrack some ammo back. Nate Dogg provides the hook, and WC hustles to come up on money with “big-ass faces.” He was ballin when your neighborhood thug was in diapers and E-40 hadn’t even broken out of Vallejo yet, so give the man his propers – he’s still got that funky flow. Typically for this soundtrack the buzz is immediately killed off by some terrible shit – starting with the wannabe Britney/Christina/Mandy bullshit of Christina Milian’s “You Make Me Laugh” and exacerbated by the wannabe rock of “Mercedes Benz” by Say Yes. Actually the name of the song and the group on the latter are so idiotic that they’re pretty much interchangable.

The album is up and down right through to the end. Up with Hikaru Utada’s “Blow My Whistle” with Foxy Brown, lukewarm with the tedious rapper Benzino’s “Figadoh” despite cameos from Scarface and Snoop, down again with continually lame R&B of this soundtrack on unknown 3rd Storee’s “I’m Sorry”, and up again on the anthemic song “Brollic” by FT (Fuck That) which may do well on the mix tape circuit. The last track is kind of a toss-up – Slick Rick’s “Hey Young World” didn’t really need a remake or a sequel, but neither he or Macy Gray insult the original on “The World is Yours.” It’s not a brilliant song like the first though, so depending on your mood you can pretty much take it or leave it.

And that sums up this soundtrack pretty well too. With Def Jam’s “Rush Hour 2” you can pretty much take it or leave it. It has a few gems, a lot of filler, and some downright terrible material. Even as soundtracks go, this one has issues. One can only hope that the sequel to the movie fares better than the sequel to the soundtrack, or it’s bound to be a box office disaster. This one certainly doesn’t have the energy or charisma of the original.