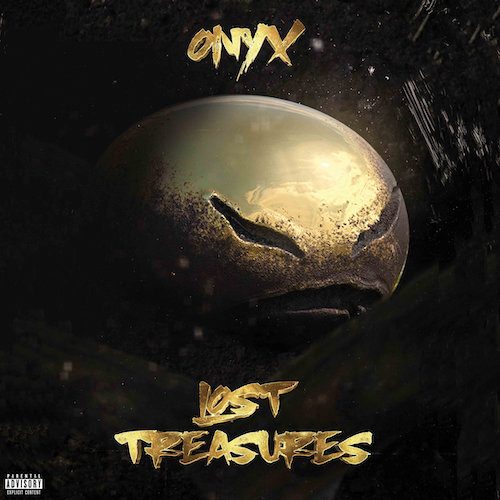 I find the title of this album somewhat problematic. That’s an odd way to start a review of “Lost Treasures” by Onyx, but it’s what the name implies that forces me to address it from the jump. For me and hopefully for some of the rest of you, the original Onyx line-up was the now “classic” version of this hip-hop group. Even though Sticky Fingaz was and unquestionably still is the leader of the crew based on his lyricism and charisma, he was solidly supported by Fredro Starr, Big DS and Sonny Seeza. Listening to them trade verses on tracks like “Slam” and “Throw Ya Gunz” was what made the rowdy hip-hop rebels from Queens so special in the first half of the 1990’s.

“Lost Treasures” implies that there are uncut gems from the earliest days of their career that just needed a little polish to be released. It might be too much to expect Big DS to be part of the presentation since he left the group early on and passed away of lymphatic cancer in 2003, but Sonny Seeza was still in Onyx from their inception until 2009. As a duo Sticky and Fredro have proven they can still hit hard, but on “Lost Treasures” they are the ONLY members of Onyx who are heard on the mic. That means these “Treasures” as such are only from the last decade. It’s interesting that there are enough unused, obscure or unheard songs that can be called Onyx in that time span that an album can be made out of it, but not as interesting as some truly lost recording sessions from the original group would’ve been.

“I Can’t Breathe” is the standout of the bunch for a variety of reasons, not the least of which is hearing Samuel L. Jackson singing the hook on the track. Sticky Fingaz opens the track with his typically hyperactive delivery, but that’s promptly offset by the calm eloquence of Talib Kweli, raggamuffin reggae from Mad Lion, and as you might expect from a track featuring Lion there are some bars from KRS-One too. The most underrated performance though comes from Brother J of X-Clan fame. I’ve got a sneaking suspicion that with this all-star cast, not to mention Mr. Jackson’s contribution, that this must have been recorded for a movie soundtrack and then somehow it wound up on the cutting room floor. I can’t confirm that hypothesis though.

The other tracks on “Lost Treasures” don’t live up to the lofty ambitions the name implies. In fact some of them sound downright incomplete. “Face Off” featuring Fredro Starr and Drag On has an awkward half minute of instrumental at the end for no apparent reason. Was someone supposed to record shout outs or exhortations at the end? If the backing track was any good it wouldn’t be as noticeable, but with no one spitting bars the banality and repetitiveness of the beat stands out even more.

“Face Off” also highlights another problem of “Lost Treasures” – a lot of these songs can’t honestly be called Onyx songs at all. 75% of this album features either Fredro Starr or Sticky Fingaz on their own or with a featured guest and not with each other. There are five songs from Fingaz including “I Can’t Breathe” and the theoretical lead single “Boy Still Got It” featuring Bobby Brown and four from Starr, but only three are Onyx as a duo or group. That’s disappointing when you hear a song like “Never Going Back” and recognize the potential that even a 50% reduced Onyx still has.

Perhaps because of the scraped together nature of this album the material is musically and lyrically all over the place. “Going In For the Kill” featuring Layzie Bone sounds like it was meant to have a sample of La Roux’s “In For the Kill” that never got cleared, and also sounds like it belongs more on a L-Burna album that an Onyx one as does his other rap on “Celebrate”. The harrowing sparse instrumental of “Think U Iller Than Me” suits the angry growl of Sticky Fingaz perfectly, but he’s accompanied by a pair of guests named Big Pay Bacc and Budda that can’t match his intensity in any way.

Quite frankly “Lost Treasures” is a mess. It’s inconsistent, it’s misleading, and it can’t deliver on its singular conceit that these are treasures that are worth saving and/or displaying. In some ways though this reflects off Onyx more accurately than was intended. The group shined brightest at their inception, maintained some of their brilliance throughout the 90’s, and then slowly lost their shine as Fredro and Sticky spent more time on solo efforts. It’s good for them to work with each other to record under the brand name they created and made famous, but even by their own post-2010 standards this is not one they should have put that brand on.