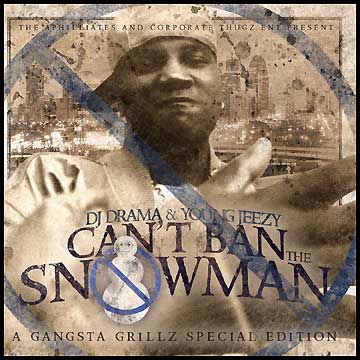 No production notes. A quasi-legit new album from an established artist. Retail distribution. Oh shit, that can only mean one thing – DJ DRAMA IS ON THE CASE! For those who didn’t get enough of Jeezy on “Let’s Get It: Thug Motivation 101” or the late 2006 release of “The Inspiration,” there’s more to go around on “Can’t Ban the Snowman.” Jeezy is serious about that “Ban” part, he’s feeling like the Bush administration is out to get him and violate his civil liberties on “I’m Back”:

“So CNN worried about lil’ ol’ me
Fuck the bitch-ass reporter and whoever floatin the story
FUCK YOU motherfuckers don’t know shit about me
What I’ve been through, and what I came from
When shit got hard, I stayed, I ain’t run
So you can blame the government, they made me this way
See the pain in my eyes, you don’t see me cry
Two tears in a bucket, who got that work”

While rappers do get put under an undo amount of surveillance compared to ordinary citizens, to the point where they might often feel like they’re being set up to fail, Jeezy can’t necessarily hold it against the media for reporting on him being arrested considering his popularity and notoriety. He CAN hold it against him if any of them failed to mention he was later acquitted of all charges of carrying a concealed firearm due to a lack of evidence. Jeezy is also right when he claims we don’t know his life, because only people who were born in Columbia, SC or who grew up in Atlanta’s 4th Ward would have an inkling of how it feels to be Jay Jenkins. Then again given the tendency of many hip-hop artists to use their creative license and freely mix truth with fiction, how much of his “Snowman” cocaine dealer reputation is on the level and how much is exaggerated. And speaking of exaggeration check out “Ya Dig”:

“Got my Chevy sittin on 24’s (ya dig)
Hit the club and grab a couple of dem hoes (ya dig)
Every nigga ’round me rock ice (ya dig)
Hurry up and learn the shit in one night (ya dig)
Lean with it (lean with it) rock with it (rock with it)
Naw I ain’t dancin I’m just whippin them grams up
The stove on medium, I’m shiftin them yams up
Got a nigga waitin at the sto’, another at my trap house
Weigh it, bag it, tie it then I smash out (DAMN!)
I bet you can’t do it like me (YEAHHHHHHHHH)”

So once again we have Jeezy returning to his favorite refrain, the life of a drug dealer. The question is why this was important enough to merit a quasi-official DJ Drama album, because it’s no different than what you can hear on his mainstream commercial albums. It’s the same topic matter, the same trademark “YEAHHHHHHHH” drawled out for bars on end, the same lyrics that seem to only loosely follow any structural form whatsoever. “This is business as usual, I’m the usual suspect” quips the Snowman, and I couldn’t agree more.

Still Jeezy does manage to breakthrough the tedium and mediocrity to deliver a few interesting tracks here and there. “Cadillac” sounds good enough to have been on a retail release, with a smooth slow-rolling beat and Jeezy at his pimped out best, even though the track is only 2:27 long. “Gangsta Party” clearly rips off Mobb Deep’s “Have a Party” but at least Jeezy is spitting with an uptempo intense flow and guest Slick Pulla doesn’t dissapoint either. Speaking of jacked beats the Snowman comes off just fine over the “Dead Wrong” loop and ends up “Makin it Look Easy.” Christina Milian represents the biggest guest star of the CD on “Say I” and this collaboration is alright by me. “Jeezy the Snowman” is another case of shorter being better, as at only 1:20 you don’t have time to get tired of it and can stay amused by the “Frosty the Snowman” musical elements within. I’m wondering if Jeezy was trying to send a message to someone by rapping over 50’s “Window Shopper” and changing the chorus to “Studio Gangsters” – it’s probably his rivalry with Gucci Mane being blown up but someone from G-Unit could easily end up taking it the wrong way.

In the end “Can’t Ban the Snowman” proves the title correct, because this CD isn’t hard to find just about anywhere, but given that Jeezy albums in general are worth the purchase more for original quality beats than the quality of his raps it’s hard to argue that a mixtape which has a lot of recycled beats is worth the same cash investment. I recommend this one only for die hard Jezzy fans who already can’t wait for his next CD.