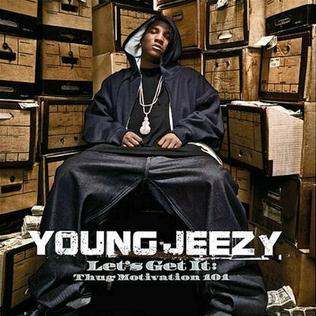 Just one question before we get started: if he’s still in the rap game ten years from now, do we call him Old Jeezy? Now before you go suggesting he just drop then young and be “Jeezy,” like Lil’ Bow Wow did when he became Bow Wow, you have to keep in mind it would cause confusion with B.G., the rapper who these days prefers to be known as B-Gizzle or just plain Gizzle. Of course in his case the name is kind of ridiculous too since B.G. literally means Baby Gangsta, and he’s way too old to be a Baby any more. Perhaps that’s why Bryan ‘Baby’ Williams changed his name to the Birdman, although a name that sounds like a cheesy comic book superhero is hardly an improvement.

Moving on – Young Jeezy already has a rep in the music industry as one-fourth of the rap supergroup Boyz N Da Hood, who themselves released a national debut album only a short time ago. Young Jeezy blew up his own profile by being the featured guest on Gucci Mane’s hit single “Icy” and basically stealing the spotlight by having the track’s first verse. For those who were not familiar with him it was here he established his alter ego of “The Snowman,” which he explained this way: “Get it? Jeezy the Snowman/I’m iced out, plus I got snow, man.” That’s about as clever as rhyming “gun” with “fun” but either in spite of or because of how inane it was the line was instantly memorable. This proves the age old axiom “so stupid he’s smart” quite true, or perhaps shows that Young Jeezy knows what he’s doing far better than any of us do.

This leads us to his solo debut “Let’s Get it: Thug Motivation 101,” which sounds like a class WWE wrestler John Cena would teach if they allowed “Basic Thugonomics” at Harvard. If Jeezy is to be our teacher and we the listeners the students, let’s see if Jeezy can drop enough knowledge on the opening track of the same name to help us graduate to the next level of thuggery:

“I use to hit the kitchen lights, cockroaches e’rywhere
Hit the kitchen lights, now it’s marble floors e’rywhere
Call the carpenter, the roof on the Coupe’s gone
Give a fuck what he sold, I’m the truth homes
Kitchen’s fumed up, niggaz jamming Tupac
Get my Benihana’s on, working two pots
Baby need shoes, partner need bail money
Bloodhound for the bread, I just smell money
Niggaz just write, I recollect
Hands on, Jeezy really counted them checks
I’m Donald Trump in a white tee and white One’s
The conversation is money nigga, you want some?”

Not bad from a student’s perspective. The tale of cooking dope to hustle and make a come-up may be a bit cliche, but Young Jeezy sounds like an old pro at the game. His slow flowing raspy voice suits the Shawty Redd beat nicely, and you have to at least give Jeezy a little bit of credit for being clever as a lyricist and storyteller. Not a lot homeboy, just a lil’ bit. “Thug Motivation 101” gets a passing grade on the opener, but there are 18 tracks and over 70 minutes of music left to go. From this point forward the seas of Jeez’ get a little bit choppy, with some parts of the album being smooth sailing and others leaving you with motion sickness. In the latter category is the uninspired “Gangsta Music.” Sadly Jim Jones “Crunk Music” is a better rapped and sounding Southern rap song and it’s done by a New Yorker. The Lil’ C produced “My Hood” sounds like a really bad version of T.I.’s “Rubber Band Man.” “Soul Survivor” is not the best singing Akon has done, and it’s certainly not the best Jeezy has done, plus his trademark “ayyyyyyyy” and “yeahhhhhh” get really irritating on this track. The bonus track “Air Forces” is also loaded with those noises, and really can’t top the much better Nelly/St. Lunatics “Air Force Ones” even though the latter’s three years old. But let’s give credit where it’s due, when Jeezy does it right he does it to death, like on the Mannie Fresh produced and guest-starring lead single “And Then What”:

“Slow Mannie, Mannie Fresh bring it back (bring it back)
It’s Mannie Fresh and Snowman, it’s a wrap
Wrapped up in the club, yeah I’m so crazy
These other rappers actors like Patrick Swayze (ha ha)
I tried to tell ’em but these niggaz ain’t hearin me
Mausberg pump, I’m ridin’ shotgun literally (daaamn)
Live from the projects, you know what it is
Ay, Snowman (what up), can I get a ad lib?
Get the club crunk, can’t take that from me
Ain’t dropped yet, still got a Lil Jon money”

The beat’s crunked up, the chorus is some catchy shit to be imitated, and the raps do show that modicum of humor and wit that Jeezy did on the opener. When he combines those qualities with the right beats, this slow-flowing Southerner can be surprisingly fresh – no pun intended. Jeezy flips it hard over the heavy “Standing Ovation” where he says “Money Talks like Charlie Sheen,” defines himself as the “Last of a Dying Breed” on a track featuring Trick Daddy and Young Buck, reps his hood from the “Bottom of the Map” all while taking the time to “Bang” with T.I. and Lil’ Scrappy:

“You better holla at ya partners
Before we catch them outside and hit they ass wit them choppers
The .45 make my pants sag
Catch me bouncing through the club wit my black flag
You don’t like it do somethin nigga
Where I’m from if we don’t like it we do something nigga
And you know we gon’ ride homes
Stomp a nigga ass out until they turn the lights on”

“Let’s Get It: Thug Motivation 101” turns out to be something of a mixed bag as a result. Jeezy represents both the best and worse traits of an up-and-coming gangster rapper – the potential to make music that entertains even as it glorifies the negative, but the occasional unnecessary use of cliched ideas that are paired with tired uninteresting beats. The greatest handicap to Jeezy’s album may simply be that it’s too long, as over an hour of Jeezy is a little too much to handle at this point in his career. With a tighter selection of tracks and concepts, Jeezy may in fact be the “Snowman” who stays colder than Ice Cube all year ’round, but he’s not quite there yet – he’ll “Get It” in due time though.