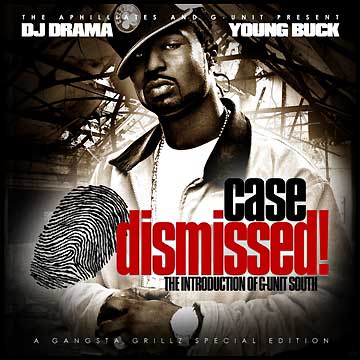 Depending on which source you get your information from, Young Buck’s official sophomore album “Buck the World” is scheduled to drop either today (March 20th) or on March 27th, 2007 on G-Unit/Interscope. “Official” has never been an impediment to Young Buck though, as he’s one of the most prolific of the G-Unit familia when it comes to releasing underground mixtapes, following a formula originally perfected by founding member 50 Cent. What’s the formula? If you keep your name buzzing on the streets and in the industry, it doesn’t matter whether or not you’re going platinum on a major – sooner or later they’re going to want you, need you, and not be able to deny you. As there’s already a pent up demand for Buck’s music he has little problem getting good distribution for “mixtapes” like “Case Dismissed” anyway, which has been available at major retailers like shared a cell with DJ Drama, the ostensible creator of this mixtape, as he and fellow mixtape king Don Cannon were busted on trumped up piracy charges initiated by greedy music industry bigwigs.

Whether or not misery loves company behind penitentiary bars, it’s obvious from listening to “Case Dismissed” that Buck and Drama are comrades in arms. Aside from the fact Buck’s life seems to be nothingbut drama, the “Gangsta Grillz” mixtape series has been all about showcasing the best rap talents in the Dirty South. Buck has always been a bit of an odd duck in the G-Unit camp; a Nashville, Tennessee rapper with an unmistakable country drawl banging on the block with born and bred New Yorkers like 50 Cent and Lloyd Banks. It was precisely those kind of differences that caused G-Unit and The Game to part on VERY unpleasant terms, but Young Buck continues to profess his love for the team at every opportunity and G-Unit is strongly represented even before you crack the shrinkwrap – Buck flosses his chain on the artwork and the album is even subtitled “Aphilliates and G-Unit Present.” Nonetheless it’s clear Buck is thinking about the bigger picture with constant references throughout “Case Dismissed” to G-Unit South, a movement also referenced by Lil Scrappy which could either be a vanity project to expose fellow Southern artists or a serious expansion for G-Unit to dominate the hip-hop landscape. It comes as no surprise then that Scrappy is featured on the opener “Come and Catch Me”:

“See, I don’t give a fuck if he know, you know
I’ll smoke a blunt in front of the police like it’s legal
Stand on the squad car screamin “Fuck the people!”
Man them niggaz hear me, they can get it like we do (Yeeaaah!!)”

It’s Young Buck who shines the brightest though, on the hook and with his verse:

“Posted up on this corner like whateva
My chinchilla covers up my G-Unit sweater
On Tuesdays and Thursdays they say the vice rollin
We see ’em ride by, but we act like we don’t know ’em
They know they we ain’t goin, see this is our hood
We wear these bandanas, not cause they look good
Let’s do this fo’ Big Tookie, them niggaz in the pen
Tha ones that won’t never see these fuckin streets again
So fuck the D.E.A. and fuck the F.B.I.
We traffickin this shit, up until the day we die”

Even when Young Buck raps over some highly obvious jacked beats, like Biggie’s “Fuckin You Tonight” for the song “Postin’ Up,” he still owns the track like it’s an original. Buck has three things going for him as a gangster rapper – great breath control, great narrative lyric writing, and no shortage of charisma in his attitude and delivery, all of which in his own words makes him “an Underground King like Pimp C and Bun B.” It’s hard to argue, particularly when he starts roastin and flamboastin on braggadocious tracks like “I’ll Be Back”:

“As the world turn, let the weed burn
I need mine and I know that you need yern
Shit ain’t all good but the hood still got my back
And believe that I got my strap
I don’t wanna hear bout the shit you’ve been through
Niggas all know about the evil that men do
You ain’t got to speak to me if this offend you
Pretend dudes show me love at the venue
See me on the news, be like: “Damn that’s ugly”
But like ‘Pac sayd: “Only God Can Judge Me”
Six rocks left ’til my packets gon’
On the block by myself I ain’t got no home”

The combination of Buck’s voice and the piano backdrop is so nice it’s not even irritating when Drama restarts the song right in the middle and you hear this whole verse twice – it’s just that damn nice. There’s plenty to like here – the pounding all-star “Let’s Get Dirty” featuring D-Tay, Hi-C and Lil Murder is tight, the slow riding “Sippin’ Purp” (with an obligatory shoutout to Three 6 Mafia), and the ominous narrative “War Witcha Homeboy” which Buck says is “so real I ain’t sayin no names” talking about how he nearly got his life took by somebody he thought was his friend. The guiltiest pleasure might be his “remix” of “I Need a Freak” though. Buck notes one of the interludes that “this shit is like a motherfuckin period for a bitch, it comes every month” and I could think of far worse fates than hearing a new mix like this every 30 days. With a bonus “Chopped Up” disc by OG Ron C, it’s not hard to get your money’s worth. This is a good warm-up for “Buck the World,” and I’m feeling ready for the main course.