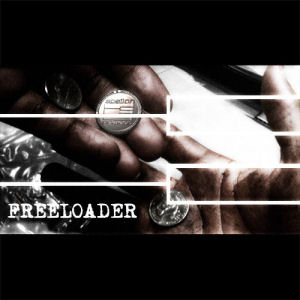 “Audacity” is the newest EP by Oxnard, CA group Epsilon Project. The group consists of seven members, rappers J-Pro, Antidote, Unexpected, Verbal-T, Calmplex, and Kingsley, and DJ Armani. Their first album, 2007’s “Raising the Bar,” impressed this site. Will their latest effort continue to deliver on their promise, or see the group succumbing to the sophomore slump?

They answer that question early on with “Turn It Up.” Producer Supa Koopa flips a soul sample that would make 9th Wonder proud, and the rappers all take turns on the mic proving their dedication to making real hip hop. Their rhymes hit as hard as the beat, declaring “DJs, MCs, B-boys, and graf hands/Hip hop is in the building.”

“Inspiration,” the lead single, is a Kev Brown-produced track that rides a keyboard riff. As with “Turn It Up, the group explores the state of hip hop, and their role in keeping it real. J-Pro raps “We take it two steps forward/They take it two steps back/By making bullshit tracks/Where’re all my real hip hop heads at?”

While “Audacity” starts with an Obama quote (“Tonight is a particular honor for me because, let’s face it, my presence on this stage is pretty unlikely”), the DJ Vadim-produced “America” shows that the group hasn’t been totally won over by Barack’s “Audacity of Hope.” “America” is a cynical, bitter song about corrupt politicians, greed, and how the pursuit of money takes precedence over everything else. They are a little more hopeful on the jazzy “In God We Trust,” which musically references “The World Is Yours.” The MCs take turns exploring religion, and the group uses their numbers as an advantage, with each MC giving their own point of view. Some call out the hypocrisy and greed of organized religion, while others explore what God means to them, presenting a plurality of opinions that all mesh together.

“Poor World” features an Ohno beat built around snapping snares, guitars, and strings, and has a convincing reggae vibe. They save the best for last with the head-nodding thump of “Deranged Vets,” produced by V.I. As with all of the tracks on “Audacity,” “Deranged Vets” sees the Epsilon Project on the attack, calling out sucker MCs and referencing BDP.

Not every track on “Audacity” is perfect, but overall it is a very solid effort. Epsilon Project provide nine tracks of West Coast underground hip hop, the kind of classic hip hop that Cali does so well. It’s enough to make a native son like myself proud.