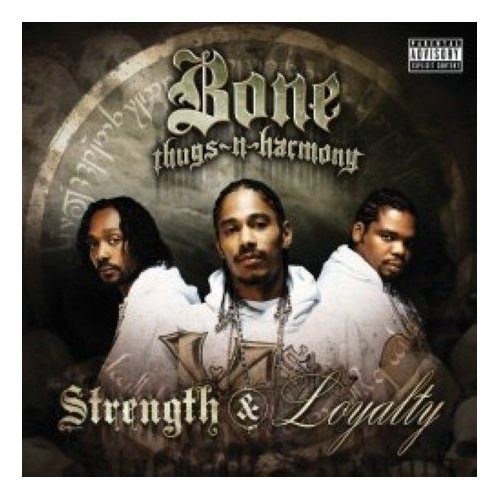 Ever since Bone Thugs-N-Harmony permanently changed their line-up from cuatro to trio consistency has become their hallmark. In fact the actual definition OF consistency fits to a T: “Agreement or harmony of parts or features to one another or a whole; ability to be asserted together without contradiction; harmony of conduct or practice with profession.” That sums up their last album “Thug Stories” quite well – harmony between all members in relation to each other, the ability to roll as a crew and not fight, and a professional attitude about their music and careers. The evidence can be found in their recording schedule. They used to go 3-4 years between new albums, but Bone Thugs have quickly followed up on the success of last year’s album with “Strength & Loyalty.” One album every year? That’s pretty damn consistent. One thing that’s always been consistent is their ability to launch an album with a big crossover single, and “I Tried” is no exception:

Krayzie: “I was in the fast lane, chasin my dream
And then it seems like when the fame and cash came
It just got me goin craaaazzzy… lately
I’ve been so faded, tryin to erase it
But I just can’t cause the drama just grows greater
And I’ve been in so many collisions by puttin shit off ’til later”

Layzie: “It’s like I’m takin 5 steps forward and 10 steps back
Tryin to get ahead of the game but I can’t seem to get it on track
And I keep runnin away from the ones that say they love me the most
How could I create the distance when it’s supposed to be close
And uhh, I just don’t know but I be out here fightin demons
And it’s like a curse that I can’t shake this part of Cleveland”

Produced by and featuring Akon, “I Tried” is a somber and smooth track built off piano keys and Bone’s harmonic rap melodies. It’s that subtle kind of crossover hit that sneaks up on you until you realize you’ve unconsciously been humming the melody or singing the hook. There’s nothing subtle about how much Bone wants to assert their strength as superstars on this new album though, pulling in the top stars of hip-hop and R&B both in front of and behind the boards. Swizz Beatz joins the crew for the pulsing “Bump in the Trunk,” Jermaine Dupri produces and appears on “Lil’ Love” even though the big guest stars this song are Bow Wow and Mariah Carey, “Streets” features The Game thugging it out and will.i.am pulling double duty, and Chicago’s own Twista even appears on “C-Town” to squash the long-standing rumor that he and Bone have beef over who originated the fast rap style:

Twista: “Now feel the devestation and unification of the thugs in the middle of the map
These niggaz fin’ ta snap; spit it for niggaz that bit it
Then give them the business they gon’ feel it when we jack
It be quick but it be crack; hit ’em with the lyrical accuracy and Harmony
I’ma see who out here fuckin with the Midwest
You could try attackin me and bombin me
I’ma be spittin so fast, they wanna ask how he did that?
Bone Thugs and we gotta spit a hard flow
It’s worthy competition everywhere that I go
But ain’t no messin with Cleveland or Chicago
Ballin through the hood in a MurciÃ©lago
Or Gallardo, or Ferrari, or Diablo
As long as the car go quick, flow so sick
Thought it was drama between Bone and Twista, we do it like this”

Some artists would be overwhelmed by having this much star power on their own album, but Bone Thugs have been stars in their own right for almost 15 years and are in no danger of being overshadowed here. Bone Thugs make a strong statement on the album’s very first track “Flow Motion.” Produced by The Individuals and featuring samples from Jigsaw’s “Sky High,” the song melds old school soul with the modern rapid-fire machine gun Cleveland flows perfectly. The song is a dizzying whirlwind of lyrical flow and dramatic musical crescendoes that strongly affirms the Bone Thugs style as being completely contemporary and in some ways far more relevant than peers with a similar record of longevity. With no disrespect towards Bizzy Bone, one really has to question at this point whether his dynamic as a member of the group was keeping them from peaking musically and creatively, something the group seems to hint at on “Wind Blow” with lines like “They smile’s phony, it’s hard to determine who’s really wit’chu” and “Get your motherfuckin hand out of my pocket, now you wanna be a nigga friend like we partners … never did call us, what is your problem?” Maybe they aren’t talking about Bizzy and it’s a coincidence but if they are – DAMN. Either way it’s a strong contender for the best hip-hop song to ever sample Fleetwood Mac.

It’s difficult to find anything to complain about on “Strength & Loyalty.” The closest one could come to issuing a gripe would be that Bone does a little too much proselytizing on “Order My Steps (Dear Lord),” but even that complaint would be in err as Bone has always had a suprisingly Christian undercurrent to their raps dating back to “Crossroad.” That’s not to say Bone are about to go on the gospel circuit either, as the album still carries a parental advisory and with good reason, but the only really important thing to consider about “Order My Steps” is whether it’s funky despite the overwhelming “God is good, God is great” vibe – and surprisingly yes it is. Just in case you had any doubt about the Thugs part of Bone Thugs-N-Harmony though, “9mm” and the Ty Fyffe laced “Gun Blast” would be at home on any of their early classics like “E. 1999 Eternal.” The only track that seems a little odd is “Candy Paint.” There’s no doubt that Bone rolls their custom kitted cars with suicide doors and screens falling down as much in Cleveland as their peers do in Houston, but a guest appearance by Chamillionaire would have really made the difference. It’s really odd he didn’t cameo given he and Krayzie are so tight due to the success of “Ridin’.” The album closes with a track as strong or stronger than the opener as Akon produces and sings on the anthemic “Never Forget Me.” (Some versions include the bonus track “Just Vibe” after this song.) Considering how tight “Strength & Loyalty” is, it’s not likely anybody is going to forget Bone Thugs-N-Harmony any time soon.