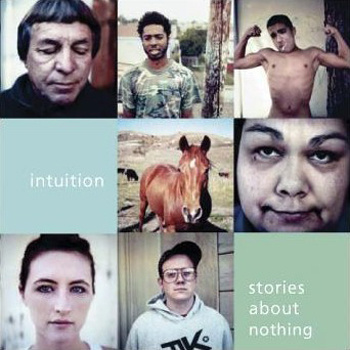 Intuition :: Stories About Nothing

The term intuition is defined in Encarta’s World English Dictionary as “the state of being aware of or knowing something without having to discover or perceive it.” Intuition has a style on the microphone that resembles this definition. His latest effort, “Stories About Nothing,” is a collage of intriguing voyages into the hearts and minds of everyday people. Whether or not these stories are true remains to be seen. However, Intuition displays an innate ability to make his random collection of tales meaningful and thought provoking. Mind-boggling wordplay is eschewed for authentic accounts of characters and their images, which are seared into listeners’ memories.

Almost all of the songs on this album are storytelling tracks. Intuition’s uncanny knack for telling tales is only matched by the performance of the LP’s lone producer, Equalibrium. None of his beats sound exactly alike, yet his style is immediately distinctive. His beats employ boom-bap drum patters, which is the only traditionally hip-hop aspect of his instrumentals. Several of his beats use a variety of instruments, and he blends abstract sounds that mesh perfectly together.

This is a stark contrast to the emceeing of the Alaska-born, California-based Intuition. Sometimes he stuffs bars with syllables, and sometimes his flow becomes more relaxed and basic. It sounds as if he were telling a story off the top of his head, and sometimes so much information comes from his descriptions that it leads to him speeding up his cadence.

This yin and yang combination often results in quality hip-hop. One of the album’s best examples of this successful fusion is “Outside.” Intuition skillfully tells the story of a waitress at a typical city diner, while Equalibrium’s guitar strums and subtle flutes merge with a head-bopping baseline. The Cali emcee’s ability to bring emotion to desensitized areas of our culture shines through here. His crystal-clear narratives magnify his story about a single mother wanting to be free from the drudgery of her job.

“Her face- weathered leather laced with lines from the sun…
Her hand- arthritic, sick of pickin’ up grime and scum
In abundance and redundancy defines her time to come
The battered baby-blue apron on her waist
Is a reminder of the time her spirit’s wasted in this place”

Intuition also addresses the homeless; giving a life and history to the local panhandler we drive by every day on the way to work. He also speaks on teen pregnancy, rapping from experience about his old best friend’s younger sister and her turbulent life. He tells both stories from a first-person perspective, and the intensity of each situation can be felt in his lyrics as well as his delivery. The lessons he learned from each person translates effortlessly into the track, as the audience shares in the awe he felt from hearing the silver lining of each tale.

Even the best storytellers are guilty of a sub par tale on occasion, and Intuition is no exception. “Destiny” is an amusing attempt at a few laughs and sheds some humor on a relatively somber album. It’s a step-by-step account of the rapper spitting game to a neighborhood dimepiece, complete with an embarrassing, yet brutally honest twist. Once the twist is heard, however, the song becomes another track about a dude trying to get at some chick, and Intuition’s misplaced swagger gets more annoying with each listen.

Intuition also stumbles when his lyrics get too abstract. He tries to match Equalibrium’s obscure genius on “Foundations,” but he sacrifices his razor-sharp narratives for clumsy verbal acrobatics. He doesn’t stick to what he does best on this track, and his flow doesn’t resemble his delivery in any of the other songs. His effort is still better than 99 percent of the verses spit in mainstream hip-hop, despite being overshadowed by guest emcee Clever. Both rappers, however, pale in comparison to Equalibrium’s hazy concoction of minute horns and guitar licks. There’s also a unique vocal sample that rivals the sample from Lupe Fiasco’s “Daydream” in its obscurity, but it fits perfectly with the record’s message on crumbling relationships.

“Stories About Nothing” is emphatically hip-hop. It goes against the grain of what rap releases have been reduced to- an album full of concepts that doesn’t just provoke self-examination, but also makes us think about the people we pass by everyday. It’s also a solid platform for two budding talents- one an emcee, the other a producer- to expose their growing abilities. Intuition has all the skills needed to be the next underground rebel; a few more years of refining his tools are necessary, however. If heads out there can find a way to cop this LP, by all means they should. It’s not the perfect testament of how hip-hop can spread its messages beyond the corners and the clubs, but it’s still a testament, nonetheless.