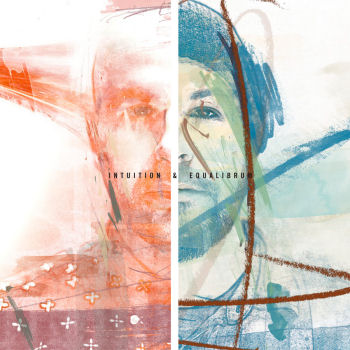 This self-titled release from producer/emcee combo Intuition and Equalibrum is why I love the Internet. For the hundreds of Hip Hop albums I have to endure enjoy listening to each year, a few leave their mark and find their way in to my Top 20 at the end of the year. Last year it was gems like “Gold PP7s” by Clear Soul Forces and “Such As I” by Innate & EP; this year it’s this brilliant album from LA emcee Intuition and frequent collaborator and producer Equalibrum.

Given the names of the two guys, you’d be forgiven for expecting some overly wordy lyrical raps like the colloquially nerdy Typical Cats. Alas it’s not, and while I hate using other artists as reference points, it’s great at hiding my lack of writing ability. This is the album Grieves makes when he grows out of the lip piercing. The album Slug and Ant would make if they wanted to make something more linear.

Linearity is great when done intelligently, with emotion and maturity. I’ll admit this is the first time I’ve heard Intuition, and he comes correct throughout. The opener “Weight Is Gone” is a barrage of quotables, unloaded over a smooth, bass-y instrumental reminiscent of Exile’s finest. Equalibrum showcases his versatility on each track, throwing some luscious electric guitar licks down on “Ain’t the Blues” and some deadly piano work on “Make Better”. There’s not a bad beat, although some are less impressive than others.

There are moments of fun amongst the largely straight-faced material: “Never Going Home” is jovial and sums up the feeling of an unplanned night out (always the best). Lines like “when I grow old, the time’s gon’ show, that my best nights I didn’t hide at home” bring a different angle to the drunken night out with friends that’s so often worshipped in Hip Hop. There’s an alternative perspective to a variety of topics, all delivered in a mature, professional manner. It’s not all heartbreak and depressive reflection, there are times where the guys lighten up, such as “1st Day of Summer”, an uplifting track that is perfect listening in January – a positive song to get you through not just your day, but the year.

My one gripe is “Ruins”, which goes for the age-old theme of leaving a message on an answer phone. Intuition’s monotone unfortunately lends this track an essence of the mundane – not helped by the dodgy singing that closes out the last minute. The final few tracks also aren’t as memorable as the first 10, meaning it’s easy to listen to the whole album and feel a bit underwhelmed at the end. Given that 2014 saw the magic 40-minute album feature heavily, and that “Intuition & Equalibrum” clocks in at 48 minutes, it’s confirmation that 40 minutes is the perfect length for a Hip Hop album. Nevertheless, I was surprised and enjoyed the hell out of this record. Considering it’s 2015 now, and we’re all taking it easy after the holiday season, “Intuition & Equalibrum” feels full of refreshing flavor and fervor – a great album to check out if you slept on it last year.