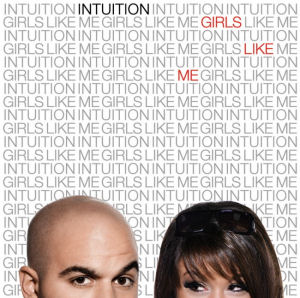 At the risk of sounding like I’m trying to make a terrible pun Intuition’s “Girls Like Me” is the kind of intensely satisfying album where the only weak moments appear when it seems as if the artist in question is second guessing his gut. The California based Alaskan has a natural knack for self reflection which he combines with acerbic wit to create relatable tracks that will still leave you smiling on the punch lines. Thanks are due to producer Equalibrum, responsible for all but two of the album’s fifteen songs, for crafting beats that match Intuition’s own voice. Each provides an undeniably Californian sound, Intuition raps about personal relationships and inner battles with the furious story telling of a gangsta rapper while Equalibrum refocuses the state’s throbbing funk through keys instead of bass.

90 percent of the time this mixture leads to an album for people who spent the years between 18 and their mid twenties listening to Atmosphere’s “Lucy Ford EPs” but have grown beyond constant youthful cynicism. Fittingly Atmosphere’s Slug is featured on the album’s final track going head to head with Intuition to address the struggle to the fight against the kind of hopeless nihilism that makes someone a bummer to hang out with, though Slug’s line still ends with his girl faking it. The maturing of indie hip hop has been interesting to see and while there are still plenty of references to crappy relationships the main narrative of the album follows a man who seems to only want to feel as good as the character in his songs brags he is.

“Otis Redding” tackles the “what’s it all mean” problem, using the legacy left behind by the crooner’s short 26 years as a jump off point to examine what motives the vocalist to rap. Intensely cerebral, yet still rooted in a theme that resonates like a gunshot for a generation looking for jobs and security in unsure times when he raps:

“I’m just a young catholic boy raised being scared of hell
Who lost his faith, grew up to be a ne’er-do-well
Riding life’s rounds and rounds, Tevin Campbell’s carousel
I only hope if my life were to end tonight
I’d leave a legacy of love lost and left behind
A couple stories for my next of kin next in line
And maybe one song that up and stands the test of time
Cause I got a body just a young as Otis, and a m-m-mind as old
They say that footage of his body being found now If we could only finally f-f-find his soul”

There isn’t a college grad, hell there isn’t a prisoner or kid flipping burgers, who can’t relate. Otis is the perfect example of the kind of lightning in a bottle everyone wishes to catch in their life, 26 short years that left a burn mark on the soul of the population.

Of course it would be wrong to give the impression that a record called “Girls Like Me” is all about that kind of blunt self reflection, though it’s certainly always present as a powerful aftertaste to most of the tracks. “Ed McMahon” for example takes on living in a recession, but maintains a joyful sense of gallows humor in addressing keeping your head up. Intuition’s integration of realism and humor is more than enough to make up for the album’s few missteps.

“Feeling the Emptiness” features great use of a movie clip from “Forgetting Sarah Marshall” to introduce its tale of love falling apart. Conceptually the song is flawless, a caustically raging tale that feels genuinely drawn from a dark time in the artist’s life. When viewed as a part of the album however it disrupts the record’s flow by coming out of left field with a emotional upper cut whose viciousness is never repeated or hinted at again. Likewise “Future Ex-Wife” is a great song that could easily find a home on the radio, but when held up against the level of the rest of these songs it comes too late in the album for such a sugary snack. As far as backpack influenced pop rap goes it easily rivals anything Gym Class Heroes have ever done, but this isn’t a pop rap album and hit though it may be it disrupts the flow and feels almost forced. Like they’re saying “shit we have to include one song for KISS FM don’t we?” after they’re already sitting on something even the most critical of Okayplayer reader will get down to. These two songs don’t feel natural to the flow he builds over the other thirteen tracks, though they’re minor complaints in the grade vision of this record.

The title is deceptive; leaving the impression “Girls Love Me” is the of diary for some kind of cocky Casanova MC pumping out generic tracks to get club girls dancing, yet really feeling like the soundtrack for a grown up hip hop Lloyd Dobler. Stereo lifted proudly above his head, not for some silly high school girl but for the world at large, and pumping out the musical truth that drives him. Fans of emo rap who want to know what happens when someone decides to acknowledge that the world, relationships, and life suck sometimes but chooses to live on anyway should make note. Girls aren’t the only ones who will love this guy.