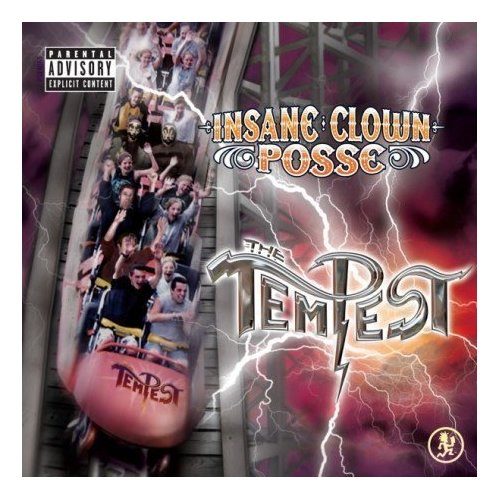 “Stepping out of the whipping and piercing rain
In walks a Wicked Clown… Violent J
One of death’s good friends they say (hey, look at that)
You’ve never seen a cloud that dark in the middle of the day
Headed straight this way…
I hope everything’s okay!”

It’s possible to respect an artist and not like their steelo all at the same time, a phenomenon I’d call “admiration sans appreciation.” For this writer Insane Clown Posse is the textbook definition. They hustle hard, damn hard. They’ve put out so many albums over the last 15 years even dedicated fans might have trouble naming them all. They’ve taken the mantra of economic empowerment to heart by creating and owning their own record label, using the power of their brand name to put out other deserving artists from their home state of Michigan. They book their own concerts, run their own wrestling shows, and merchandise the hell out of every part of their franchise. If an artist can go gold in Cali just off the local, ICP can sure as hell do the same thanks to intra-state loyalty and a worldwide fanbase of Juggalos. If you want to learn how to be an independent success and not have to sell your soul to a megalithic corporation, Shaggy 2 Dope and Violent J wrote the book on it. Despite all this respect for their hustle one has no choice after listening to their music but to say “What the FUCK was that?!” That’s not to say they haven’t done a song here and there I liked – “The Oddities” for one, “Chicken Huntin'” for another – but mostly their music is incomprehensibly grotesque and voyeuristic; like an Italian zombie film minus the hilarious special effects.

I’ll say this much for “The Tempest” though – the opening track “The Sky is Falling” actually reflects the theme their album’s title implies. You may think of “The Tempest” as a play by William Shakespeare, or an action-packed video game from the 1980’s, but the word “tempest” itself describes a violent tumultous storm. Violent J’s awareness of the theme and choice of lyrics in this case is therefore impressively well thought out – “whipping and piercing rain” is exactly what one would expect from such a violent cloudburst. The beat is a somewhat repetitive but pulsates with enough heavy bass to carry the theme all the way through. For that same reason I also respect “Ride the Tempest,” which translates the violence of the storm into a roller coaster of the same name.

“Electrifyin and now you climbin, feels like you flyin
The carts are shakin, slowly elevatin, sound like they breakin
Rickety, rackety, clickity, clack, up we go, you no look back
Some french guy had to look, froze up and fell out, he got so shook
So fuck him, them polls keep duckin, this cart you stuck in
Upward spiral, the rings of fire, still climbing higher
Rackety, rickity, clackity, click
Now you on the tip-top tipity tip
Of the largest, fastest, steepest, deepest
Tallest, all this, and more roller coaster
[…]
You fallin so fast you see your whole life flash
Your balls jumps up your ass in a quick dash
You get whiplash, the shit fast on your bitch-ass
And it don’t stop ’til the shit crash”

ICP got me this far in their album with no major qualms, but just like a roller coaster once the adrenaline rush wears off the thrill is gone. “Alley Rat” brings me crashing to earth with a monotonous beat and flow that goes bap-bap-bap-bap-bap-bap-bap-bap until you want to stab your ears out. “Haunted Bumps” is similarly challenged, as ICP seems to find one note that works and stick with it beyond all reason, eschewing any attempt at finding or creating a melody. It isn’t until “Hum Drum Boogie” that they show any potential again, rocking a humorous sing-song flow and a shuffling rhythm that’s pleasantly reminiscent of Smash Mouth, only not as radio friendly.

“She surprises me, sometimes she hums on my balls
And I can see the world right through her bedroom walls
She has a jaw like a pelican’s beak is deep
Humming me right to sleep, my favortie freak
I can rearrange the patterns of the stars in the sky
I can fly with the seagulls on the beach with the tide
Cause she can blow me there, I swear, right through the air
If I ain’t really there, my balls do not care, my balls”

It’s revealing that it takes this level of juvenile lyricism to really bring out their best effort. There are some other songs on “The Tempest” worth praising, at least musically. “I Do This!” is one of Mike E Clark’s best beats, the kind of hip-hop rock that could crossover quite easily with the right exposure. The sinister overtones of “What About Now?” would be at home on any horrorcore hip-hop compilation, “Watch My Ride” could easily have been done by Lil Jon, and “Bitch I Lied” is worth a laugh or two. One could even argue that ICP is airing a subtle critique on sensationalistic journalism with “News at 6 O’Clock” and of America’s gun-toting culture on “The Tower.” The Clowns putting out some thought provoking shit; hell must have frozen over. I’ll say this much – “The Tempest” has changed my opinion of ICP, not a whole lot but a little bit. I still respect their hustle more than their music, but once in a while the Detroit boys can put out some hip-hop the equivalent of their hustle in quality. If they could do it more consistantly I’d be a little less hesitant about recommending their albums, but monotonous themes and beats keep them from achieving what may be their true potential after all these years in the game.