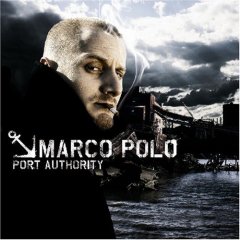 Like many beat devourers, I’ve grown accustomed to having a look at production credits in the liner notes of an album. It isn’t always that easy to find them in the letter jungle of the small booklet, especially when dealing with compilation records. “Port Authority” is the easiest compilation record I ever had my eyes on. There is just one man single-handedly responsible for every track on the album: Marco Polo.

Polo’s musical life story reads like a fata morgana looks like: too good to be true. Young hip-hop ‘beat nerd’ spends his days playing liner notes detective. He finishes music engineering school, and trades in hometown for New York to seek his fortune with an MPC 2000 XL clenched tightly under his arm. He finds temporary shelter in friend’s basement, happens to meet established local producer Agallah, and gets a job through him as intern at well-respected recording studio. He slips in beat CD’s together with the bottled water he is constantly getting for the rap stars. A couple of years later: “Port Authority” is released, a who is who of indie rap music off the Atlantic seaboard.

According to his bio at www.marcopolobeats.com, MP has been putting together beat formulas since the beginning of the century. That, combined with the fact the home town he left is Toronto, Canada, should have plenty of local beat makers bite their tear-stained pillows until they taste feathers and blood. Whether it is his talent for adjusting tunes to the specific needs of a lyricist, or his steady flow of quality productions on more or less known underground albums: it got the attention of a stream of notable MC’s. Wordsworth, Masta Ace, Copywrite, Jahsun, Supastition, Kool G Rap, Buckshot, Jojo Pellegrino, Edo.G, or O.C.: they all come together on Polo’s album. “They say you are only so good as the people you surround yourself with,” is all the modest ex-intern has to say about it on his intro before he pulls open this big can of lyricists.

No matter how much the featured MC’s differ from one another, they pretty much all share the desire to bring back the excitement of mid-nineties hip-hop on “Port Authority.” “Rollin” features a gathering of artists, which would have been even unusual in the period hip-hop albums were still riddled with guest shots. Sadat X (Brand Nubian), Psycho Les (Beatnuts), and AG (DITC), forming something like a Boombap Triangle, cheer on old-fashioned chronic use of blunts over easy keys and heavy bass. Other MC’s just require their sheer mic presence to give the listener throwback shivers, like Large Professor does on “The Radar”:

“You’re now on a new adventure with P
Where I write and recite words intricately
Through the shuffle, the hustle and bustle I unruffled
Dude’s feathers, seeking out new endeavours
I reign, by riding on the outside lane all day on ’em
Even in Down South, the name ring bells”

After that jab towards the south from the highly identifiable rhyming producer Large Pro, the question arises which unique quality Polo himself can bring to the table as a producer. He stays far from the microphone, but has a knack for finding left-field samples. His talent for concocting banging, well timed drums is unmistakable. But is that enough to speak of a Marco Polo sound? The almost chameleon-like change of moods and sounds on this album makes that hard to tell.

Those familiar with Kev Brown’s Low Budget crew and his warm, buttery production style will easily mistake “Low Budget All Stars” for a hidden Japan track off his debut “I Do What I Do.” “Hood Tales,” featuring Kool G Rap and DV Alias Khrist wouldn’t have been misplaced on G Rap’s earlier “The Giacana Story.” The chimes accompanying O.C. on “Marquee” reminisce vividly of the days when Buckwild and Diamond D were still rocking bells. Omar’s voice sounds fresh and confident, just like in the old days:

“You need not to worry no more
Omar has officially returned
Thanks for your concerns
And now the Phoenix has risen from the ashes
With puff puff passing weed inside ‘dem backwoods
I’m just that good, I have been better to the letter
Of the game I done mastered”

“Port Authority” isn’t just an outsider’s claim for recognition. It is also the return of Rawkus, a label that fell from grace after being the most respected indie rap label of the late nineties. This album is not as spectacular as “Soundbombing II,” one of Rawkus’ most successful compilation releases back then. On the other side, Beat Junkies J.Rocc and Babu had a whole regiment of able producers at their disposition for their compilation. Marco Polo, in retrospect, is a one man band, creating instead of compiling. The Canadian native has come a long way already, and even though “Port Authority” doesn’t showcase one particular style, it’s a hell of a calling card.