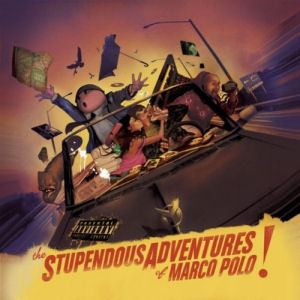 Marco. POLO!!! A childhood swimming pool game most readers have no doubt played many times – and some may be old enough to have taught it to their children too. Of course the name’s claim to fame runs much deeper than that – the original Marco Polo was a 13th century merchant and explorer whose novel “Il Milione” became one of the most widely read books of his time. Polo’s account of his travels throughout China exposed Europeans to a people and culture they had not previously been familiar with, and to this day scholars still debate whether his accounts are literally accurate or embellished for the audience that would read his tales. General agreement seems to be that it’s an accurate tome albeit one that has an often jingoistic Christian tone, but it’s fair to say either way the influence of the book means his name is well remembered almost 700 years after his death.

Many rappers and producers would no doubt like to be that well remembered in the centuries to come, but only Toronto, Canada’s own Marc Bruno had the moxie to take the name and make it his own. We’ve often seen rappers adopt (in)famous nom de plumes in an attempt to make their exploits larger than life, but the degree to which that effort succeeds always depends in the end on the quality of their work. Bruno has little to worry about then, because ever since he brought his beats to New York’s underground rap scene, his name has become synonymous with quality hard hitting music. From Pumpkinhead’s “Orange Moon Over Brooklyn” to Torae’s “Double Barrel” to Ruste Juxx’ “The Exxecution,” it’s been one banger after another in Marco Polo’s catalogue. In short order Polo’s been ranked among hip-hop’s best, drawing well deserved comparison to producers from East to West like DJ Premier and Alchemist. It’s safe to say that putting Marco Polo’s name on a project automatically engenders more interest in it, knowing that no matter how well known or obscure the rapper flowing to his production might be, the music will ultimately make the listen rewarding.

“The Stupendous Adventures of Marco Polo!” is a statement album from a man who made the historical name famous again; famous as more than just a game of tag played at summertime water parks. The press release accompanying this 16 track disc describes “Stupendous” as a collection of “unreleased tracks, b-sides and remixes that are ill” but in truth it’s so much more than that. Polo is no doubt happy to get some leftovers from the lab the shine they deserve, but the rappers he worked with on this compilation get just as much exposure as the beats. Previously obscure and/or unknown emcees like Saga and Shylow get a chance to be reached by the masses for the first time and could have no better platform than one of MP’s beats. The latter rapper spits a relentless barrage of bars over the bells and beats of “Whylin Out” and shows star potential:

Standing out lyrically on this album is hard to do as Shylow isn’t the only hard hitter stepping up to the plate. In fact this album is virtually a who’s who of rappers MP has either worked with before or who tear it up every time they drop a track – Skyzoo, Royce Da 5’9″, Torae, Elzhi, Bad Seed and more. What’s surprising though is some of the legends of the past who came out of the wood-to-work with Polo on this disc, including a rap veteran best known as the “Smooth Assassin” of 1990. That’s right, the one and only Grand Daddy I.U. has resurfaced again on the aptly named song “The Veteran”:

“I’ve been in the game since Daddy Kane sang ‘No Half Steppin’
When Large Pro rocked with the Main, I was reppin
Before the game changed and the bullshit crept in
I was already a legend, veteran ask your breddern
I scored me a classic, my first LP
Until you cowards do the same, fuck can you tell me?
I’m from the era of the boom bap, and real rap
Before the West or the Dirty South was even on the map”

Coincidentally Large Professor can also be found on this release, flowing over the sinister production of MP’s “Radar Remix.” Other standouts on the album include the throwback beats of Ruste Juxx’ “Bomb Shit,” Torae’s menacing assault over Polo’s militaristic boom on “Combat Drills,” the Marco Polo remix of “How I Get Down” featuring Skoob of Das EFX fame (“Figgedy F you! Guess who’s back? … They love me in the hood like Chinese food”) and the spine tingling MP revision of “Best to Do It” with Elzhi, Royce and Supastition. Honestly though picking individual tracks is a bit challenging since the quality of the beats behind them is far above par compared to most albums you’ll listen to this year. If you want a disc you can put in the whip and drive around to without hitting skip once in the summer of 2010, there are plenty of contenders out there but “The Stupendous Adventures of Marco Polo!” still ranks right at the top.