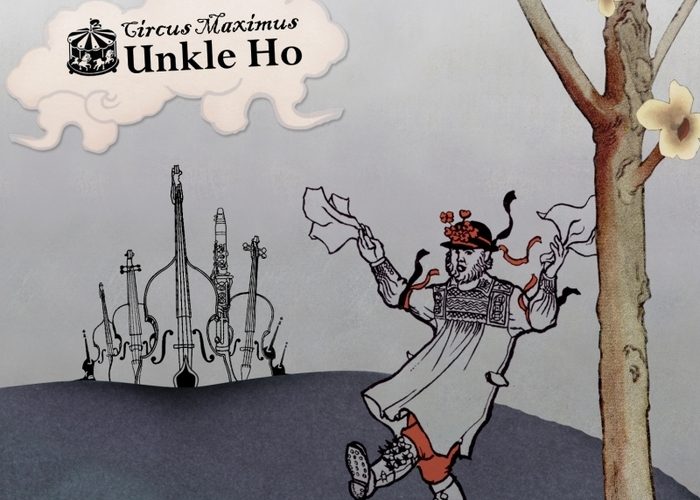 If The Roots released an album of just ?uestlove lightly tapping on his drums it could be defined as rap music moreso than “Circus Maximus” by Unkle Ho as drum patterns are, at least historically, a major component of much rap music. This isn’t to say that the album in question is not completely irrelevant to the cannon of instrumental music, but c’mon now, this is Rapreviews.com, right!? The ?uestlove analogy is particularly fitting in this case because, like the afro-haired drummer, Unkle Ho has been the instrumental composer for an Aussie hip-hop act known as The Herd since their introduction to the scene in the land down under. “Circus Maximus” certainly strays from any Hip-Hop roots and leaves the audience with a more polished version of old ragtime music that will have a lot of core fans scratching their heads.

The hip-hop scene, much to the chagrin of The Herd, is fairly irrelevant in its impact on the rest of the world and even in its’ homeland as Aussie acts must painstakingly self-promote and strive to succeed down the indie route. Since their inception in 2001, The Herd created their own relevance by focusing on deep subject matters like racism (on ‘77%’) and the failures of government (on ‘Burn Down the Parliament’). The crew from the suburbs of Sydney have done their best to survive as a collective in the Aussie hip-hop scene, but the group has since lost a member in MC Bezerkatron. Enter “Circus Maximus” which represents a new direction for Unkle Ho that very much lacks a hip-hop vibe.

The album makes for an interesting listen upon the first track entitled “Affogato” which sets the musical landscape as nearly classical with the playing of a pace-setting double bass and a fascinating choice of a guzheng. Most of you readers are probably wondering what the hell a guzheng is, but do not be discouraged by this as yours truly had to look into it too. A guzheng is a Chinese instrument created some 4000 years ago that is a half-tubed wood zither with movable bridges that sounds something like a clarinet. Jane Tyrrell adds some depth to the song with some entrancing operatic vocals. So begins “Circus Maximus’ ” wild ride of sound.

Only two tracks on the album have any real in-depth lyrics beyond just for purposes of harmonizing. “Bally Broad”, once again featuring the assistance of Jane Tyrrell is the album’s highlight. Ms. Tyrell also laid down vocals for many of The Herd’s tracks in the previous half decade, but these are amongst the most beautiful of any. She sounds something like the British R&B songstress Corrine Bailey Rae with her soft accented charm. The lyrics unfold with intriguing lines like, “It’s a place to call home and the shoes on her feet, prospects look lone for this girl on the streets,” and “a place for those with fiery ambition, a place where reality meets fiction.” The song is something of a masterpiece in the way that it tells a story in a very loose and abstract way. Unfortunately, the other track featuring Mikeangelo is far less effective with his overly abrasive baritone voice.

The titles of the tracks probably lend a glimpse to what the overall sound of the album is with “Hiroshi Waltz”, “Big Bad Rag” (which feels like it is straight from a Brian Setzer album) and “Spaghetti Western”. The music on the album is very much inspired by the sounds of old ragtime music with constant uses of classical instruments like the harp, flute, clarinet and aforementioned guzheng. Occasionally a beautiful comparison can be made to the backdrop to some of Billie Holiday’s classics, given she had the good fortune of modern recording techniques.

Calling “Circus Maximus” by Unkle Ho a hip-hop album is like calling frosted flakes a well-balanced breakfast–it is simply not the case. Unkle Ho might have a history making the beats for the Aussie hip-hop group called The Herd, but his new LP (despite recruiting some of the same lads) is decidedly as non-rap as it gets. Therefore, if you are expecting the same direction as his other work or are just reading this because you like learning about new rap joints then just forget that “Circus Maximus” even exists, but if you are interested in the development of an artist and truly fascinating instrumental albums then you might want to give this one at least a few spins.