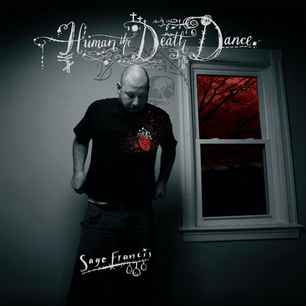 Sage Francis believes in keeping a healthy distrust of a great many things, not the least of which is his how hip-hop is defined and how other people define him. When you think you’ve got him pegged as an underground rapper who’s independent-as-fuck, he signs a major label deal with Epitaph Records and “Escape Artist” videos begin showing up on MTV. When you think you’ve boxed him in as a commercial crossover sellout, he launches the website knowmore.org for grassroots activists to keep their eye on the behavior of corporate fat cats. “Human the Death Dance” is much like the man himself a carefully conceived contradiction which forces you to look down the rabbit hole and try not to fall in.

“Rose in my mouth, the petals are black
One armored suit, the metal’s intact
Come fully strapped with a skull wooly hat
Just picture that, clickety clack
Now I find my location and unfold a map
My index inspects it and follows the path
My horse is on loan, and I borrowed a staff
From some mystical wizard, I will give it back
But I’m off to the races, my face has got cracks
Worn out and weathered like a red leather mask
Been through the storm, future, present and past
Light as a feather, swift as a cat
Cold as a rock, you know not what you nicked from my sack
Little bastard, you’ll get skinned for that
And swim with the fishes once I finish this task
No strings attached, clickety clack”

The lyrical insertions are two sides of one coin that flips so fast they blur into the same thing. On the former “Underground for Dummies” Francis freaks his flow over a ruggedly hip-hop beat by Odd Nosdam, pounding with boom bap head snap and haunted by a ghostly melody you can’t shake as you concentrate on his verbiage: “This doesn’t make realer than you, or faker than you, but I’m authentic!” On the latter “Clickety Clack” the track is a metalocalyptic guitar smasher that opens with a creepy voice reading Shakespearean english; setting the tone for an epic narrative straight out of cinemative medieval tales of Ash Williams. Turn the diamond in your hand and see yet another facet of Francis, the “Li’l Sage” rap snippets showing a young boy with the desire to be a hip-hop star but not yet the talent to take him that far, and one such clip opens the musically stripped down verbal assault “Midgets & Giants”:

“You are really not all that… dope
No-n-no-n-no-no! No-n-no-n-no-no!
You read me all wrong fellow, you need to do your research
An MC with a 4 song demo and you got t-shirts?
HELL NO! I don’t want to do a CD tray
Don’t want to see your made-for-TV DJ fade into the rave scene
it seems he just came from… no sticks and energy drinks
You gettin hyped up on white stuff never meant to be split
YOU LIKE DUST?! Well I might bust your whole family
But y’all ain’t hippy chicks and pixie sticks ain’t nose candy!
Servin bags with herbal magic
Sellin placebos to too many people got your girl’s ass capped!
Your lady got overpowered and you got played
Sellin baby powder it’s over the counter drug trade!
Oh you a big shot, now you hip-hop? [..] I think not”

As much as it rocks hearing Francis break down ravers turned hip-hop poseurs, the best and or most controversial line applies to any wannabe MC: “8 Mile wasn’t true shithead! It was a promotional tool, but not for you shithead! So let me tell you exactly what to do shithead; don’t be a fool, stay in school… shithead!” Francis recognizes his strength is also his curse, as people are automatically going to judge him as contemporary to other MC’s with similar melanin levels even when he’s clearly reached a definition in excess of people’s expectations. Del the Funky Homosapien once quipped “MC’s should know their limitations” but Francis may prove either to be the exception to that rule or that the rule is altogether wrong. If Francis really knew his limitations would he break new ground with the funky fat Ant produced sports themed “High Step,” the beautifully tragic Alias laced “Keep Moving,” or the rapped and sung intricately spun “Hoofprints in the Sand” among others? Listening to “Human the Death Dance” is an experience on multiple levels – you can simply appreciate it as a musical hip-hop experience or you can dig deeper than Atlantis and find multiple meanings in every metaphor and line. The beauty of the dance is that it exhausts you and inspires you at the same time, provoking introspection and exhiliration at the same time. Francis is on a level where even next shit is two steps behind.