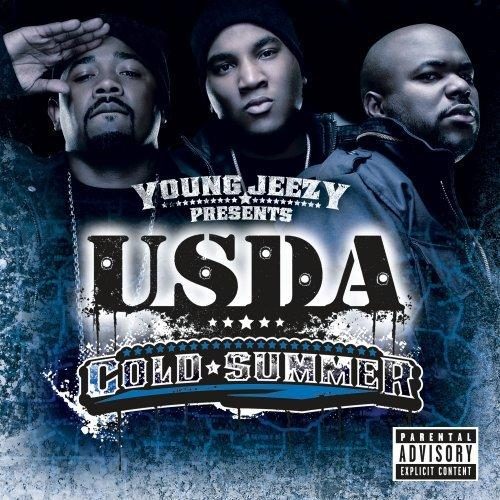 Jay Jenkins continues to perplex me. There are times I almost feel I’ve got Jeezy’s awkward rap style and repetitive topic matter figured out. I can start to see where the public at large is coming from, why Young Jeezy has risen up from relatively obscurity a few years ago to hip-hop superstar status, and I’ll even listen to a mixtape like “Can’t Ban the Snowman” and think “Well it could be better, but Jeezy’s just trying to keep up with the demand from his fans.” Just when I’m about to say “ayyyyyyyyyyyyyyyyyyyyyy” like Jeezy does and let all his other indiscretions slide (including his most recent arrest last week) he confounds me yet again by thrusting a rap clique upon the populace named the United Streets Dopeboyz of America, or U.S.D.A. for short. Besides the fact somebody should have told Jeezy rap groups from the South who use famous acronyms starting with U fall on hard times (where is U.N.L.V. these days) the silly name is followed up by the song “White Girl.” Not only did E-40 do a better song of the same name last year featuring Southern heavyweights U.G.K. (over a track borrowing effectively from Boogie Boys’ “Fly Girl”) this track goes over the top into absurdity with a chorus essentially comparing drug sales to vapid R&B pop singers.

“You know we keep dat white girl, Christina Aguilera
My jewelry too loud, homeboy I can’t hear ya
I need ’bout 50 of dem bricks at the topic
They know we run the streets, man dem boys best stop it
Fresh white tee in my all white Caddy
Yeah she your girl but she call me daddy
Smokin nothin but the best, you can call this Cali
Half a brick on the seat, you can call that Sally”

Aside from a pounding track from Drumma Boy, there’s almost nothing redeeming about this track; certainly not the verses from fellow U.S.D.A. co-horts Slick Pulla and Blood Raw. Perhaps the only other place this album redeems itself in listening quality is on the so-called “bonus track” of the CD, a remix of Jeezy & R. Kelly’s duet “Go Getta” with a new beat by The Runners and guest verses by Bun B and Jadakiss.

Bun B: “I’m in the triple black convertible GT Bentley
Trill Underground King, got the queen right with me
And things right with me and that thang right on me
I’m a one stop shop and a one-man army”

Jadakiss: “Niggaz is too frail, you either a snake or a new snail
My heart as cold as the new jail
Everywhere I go they beggin me
But one wrong decision could destroy your legacy”

The rest of this album is incredibly tedious. “Focus” sounds like it wants to be a horny horn street anthem but instead sounds synthetic and completely phony. “Get it Up” needs a little help from Enzyte or Viagra. “Corporate Thuggin'” comes as close as any song to being an acceptable Jeezy track thanks to Arnaz ‘The Nasty One’ Smith’s beats, where Jeezy wryly notes “I don’t make music for the motherfuckin critics.” True dat. The album is littered with strip club PSA’s like “Throw That Money” (although “making it rain” didn’t work out so well for Pacman Jones), tired begging to “Live My Life” from rappers who feel they’re hated on for their wealth and overly simplistic concepts like “What it Is” that sound better suited for monosyllablic rappers like Lil Jon.

Undoubtedly Young Jeezy’s fans will have a different view of his U.S.D.A. clique. That’s fine, those fans are exactly who this album is meant for. In time Jeezy no doubt hopes to spin off Blood Raw and Slick Pulla into successful solo album careers G-Unit style, and more power to him. The problem here is that I was barely sanguine on Jeezy’s musical value to begin with and by loading up a group album with second tier level rappers it’s just dropped below the threshold of relevance for me completely. The “Cold Summer” album is recommended for die-hard Jeezy heads with Snowman t-shirts, while the rest would be advised to wait for some winter heat.