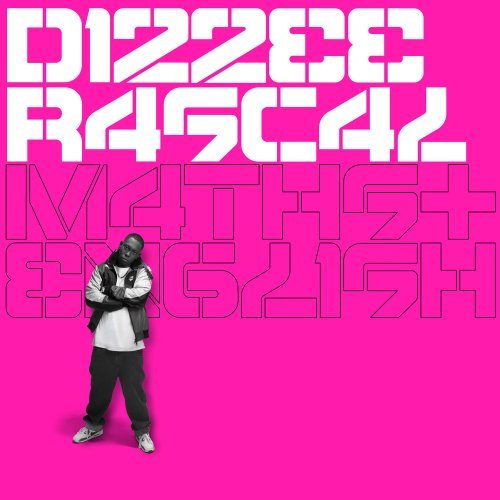 Most rappers from the United Kingdom can only dream of the worldwide attention Dizzee Rascal commanded when he released his debut “Boy in Da Corner” in 2003. A whirlwind that was about to escape from the local London grime scene, he was poised to stir up an increasingly stale and stagnant urban music market. His 2004 album “Showtime” was released to considerably less international fanfare. His third strike, “Maths + English,” will reportedly be released digitally only in the United States, partially because of lackluster sales of “Showtime.”

Thankfully, the impact and importance of a rap artist isn’t determined by his or her reception in the motherland of the artform. A balanced effort that brings together a variety of influences, “Maths + English” immediately entered the UK top ten, and rightfully so. Lyrically, Raskit is still fighting demons, past and current ones, his own as well as those that come with pop star fame. But six years after he wondered as a sixteen-year-old, “When we ain’t kids no more, will it still be about what it is right now, like fightin’ for anything anytime and actin’ without a care?” Dylan Mills has gotten his priorities straight:

“I don’t believe in fate
Life is what you make it, make it great
I’m tryin’ to elevate, concentrate on gettin’ my paper straight
Survive the great escape; from the ends I used to congregate
until I could no longer wait and had to find a purpose
Otherwise I would’ve been worthless, makin’ fuss on the estate
ignorant to what the earth is offerin’, when I should take
every chance and every opportunity to try and make
every second and every breath of life somethin’ to celebrate”

One of the most noteworthy openers in recent memory, “World Outside” sees Dizzee addressing his ‘bredrin’ that might have been with him in the struggle or might just now be sucked into it. Aware that he had to leave his East End council estate to get to where he’s now, he doesn’t pretend otherwise, but tells them of the possibilities that lay beyond the imaginary borders of the ghetto. A plea that is as emotional as it is rational, “World Outside” is the honest argument you hear far too seldom from rappers who pledge allegiance to the street. It shows you don’t have to forfeit your street credentials when you acknowledge that there are other avenues to prove yourself:

“Seen a couple of figures but I still dream of things
Like the kind of shit money can’t connect me with
Unconditional love I won’t regret to give
I’m young, black, rich, and ruthless, I swear, star
Still if you need a helpin’ hand you know I’m there, star
I’m from the street, you’re from the street, we all done dirt
Now it’s time to flip the script, fuck the sufferin’ and the hurt
Cause I’ve seen the bigger picture, it’s all good
There really is a world outside of the hood”

“There’s a world outside of the ends, and I want you to see it,” the hook affirms, which as a statement is as responsible as rap will ever get. It would be naive to expect “Maths + English” to depict that outside world in detail. Dizzee wishes that they see it with their own eyes rather than just hear about it on his records. That’s why “Hardback (Industry),” the album’s music biz song, isn’t the usual letter of complaint, it’s an instruction on how to plan and handle your career. It’s been done before, but rarely as detailed. Considering Dizzee speaks to a new generation that is prone to repeat the mistakes, this is a fairly important song that highlights the rapper’s sense of responsibility.

Personal experience informs a song that doesn’t quite fit the bill of traditional responsible rap music. Rewinding back to Dizzee’s “road yout days,” the album’s second track warns, “Don’t make me get old school!” Ignited by a beat that sharpens Lyn Collins’ “Think (About It)” into a hard-edged dance track (sounding like a Shut Up And Dance version of Rob Base & DJ E-Z Rock’s “It Takes Two”), “Pussyole (Old Skool)” reflects the vitality of hip-hop and techno that first inspired UK producers to condense random rhythm tracks into jumpy, prickly compositions, creating a genre that would first be called jungle and then drum-n-bass. Later on “Maths + English” Diz recalls his first steps as a jungle DJ, and “Pussyole (Old Skool)” takes him back to these tumultuous teenage years when boys learn to be men: “Why you rollin’ with that (pussyole)? / Movin’ with that (pussyole)? / You know that he’s a (pussyole) / I showed you he’s a (pussyole) / He’s always been a (pussyole) / So he’ll always be a (pussyole) / But you’re still with that (pussyole) / You must be a (pussyole).”

While there’s something disturbing about the idea of hundreds of concert goers or clubbers chanting “Pussyole!” at the top of their lungs, it is indeed hard not to join in the contagious chorus in sync with the slamming beat. And as sad as it is when a young man’s sound advice on friendships is riddled with defamatory language, “Pussyole” is, like many others written by this MC, a song with a clear and honest purpose.

If “Pussyole” deals with personal deception and disappointment (it seems to contain jabs at Dizzee’s former mentor Wiley), “Where’s Da G’s,” one of the most high profile transatlantic collaborations so far, aims to expose a public charade. Blair and Bush haven’t shown more resolve in fighting the Axis of Evil than Britain’s Dizzee Rascal and the Lone Star State’s UGK do in dissing studio gangsters. Hearing Dizzee’s “You ain’t got yourself in no life-threatenin’ situations yet / You’re no dealer, you’re not ballin’, you just get yourself in debt” next to Bun B’s “Show me the blocks you got on hold / show me your workers, show me your shooters, let me see the neighborhood you control,” set to the same slow low-end beat enriched with synth swirls, makes you realize that these vocalists virtually speak the same language, just with different accents.

“Wanna Be” tackles the topic with more humor and closer to home as Dizzee teams up with singer Lily Allen, who injects the track with her sassy swing. While she warbles (to a tune of the children musical _Bugsy Malone_), “So you wanna be a gangster, tell me just one thing / what you know about being a hard-man, your mum buys your bling,” Diz stresses his own independence: “Nobody dictates, I’m choosin’ / where I go, what I do with my life, stupid.” Together they invite people not to step their gangsta up, but to just be themselves: “Why don’t you just kick back, be jolly / stay at home with a cup of tea, watch Corrie.”

Corrie, of course, being _Coronation Street_, Britain’s most popular and the world’s longest-running television drama. But British references are few, and with many songs touching on topics that are standards in the rap repertoire, “Maths + English” has a good chance of being universally understood. The first single, “Sirens,” has correctly been compared to Jay-Z’s “99 Problems,” only that the metal guitars are given plenty of leeway. While “Flex” takes it back to the playful, pre-grime garage sound of Dizzee’s youth, “Da Feelin'” has him teaming up with drum-n-bass legend Shy FX for an exuberant summer tune that reflects the Londoner’s newfound zest for life. “Bubbles” enters with the confidence of a club track that celebrates not simply the protagonist “dressed to impress” but also the determination with which he goes about his business: “I got my eyes on the prize / money in my grill, bigger picture in my eyes / hands around my testicles, middle finger risen / every step that I take is a step with precision.”

In general rap has been where “Maths + English” is and done what Dizzee Rascal does. Especially in its more egotistical moments the album can’t avoid cliches. Yet the cockiness is constantly tempered by bits of advice. Or by humor. Channeling the provocative attitude of punk, “Suk My Dick” is obviously meant as a joke. But this wouldn’t be rap if the same sentiment couldn’t also be expressed in all seriousness, like on the stark closer “U Can’t Tell Me Nuffin’,” a tribute to grime’s eski/sublow sound.

“Paranoid” opens up with a particularly chilling chorus (“Rinse me out, use me up, cuss me down, fuck me up”) and unhealthy introspection, before Raskit remembers the album’s key theme outlined in “World Outside”: “The ghetto, I already saw it / I’m in the world now, I gotta explore it.” “Excuse Me Please” is a tad bit too naive in its bewilderment about all the bad things in this world, but as an intentionally simple, almost child-like accusation of the adult world, it works. If you like your rap emotionally more complex, you’re gonna go with “Temptation,” which incorporates an Alex Turner sample from an Arctic Monkeys b-side Dizzee guested on, and where he reassumes his grown man stance:

“I ain’t sixteen, and I ain’t no boy, ain’t no kid
The world ain’t flat and the picture’s big
Certain things that I gotta get rid
and a whole lot more that I gotta get with
So I gotta stay and roam on my own
gotta move on, I can’t stay at home
Cause I know what’s there is all the same
Crack, cocaine and ghetto fame
cold hard cash and a bit of a name
And I’ve see it all, so I need a change
Lost too many bredrins to the game
and you could say temptation’s to blame”

“Maths + English” has been called ‘Dizzee’s most upfront and accessible,’ ‘his strongest, most ambitious and mature record to date,’ ‘one of the most memorable and challenging hip-hop albums in recent memory,’ and even ‘the most complete, intense and thrilling British hip-hop record ever made.’ Lacking the expertise to be able to pass such definite verdicts, we’ll content ourselves with calling it an excellent album from a rapper who once set out to get ahead, at the time of writing has made it far indeed and is intent on making even more progress: “I took it there and now it’s time to take it further.” Its title is unfortunately not explained by the album itself (English apparently representing the writing, Math the musical and monetary aspects of the artist’s trade), but it’s obvious that Dizzee Rascal fully embraces the idea of lifelong learning.