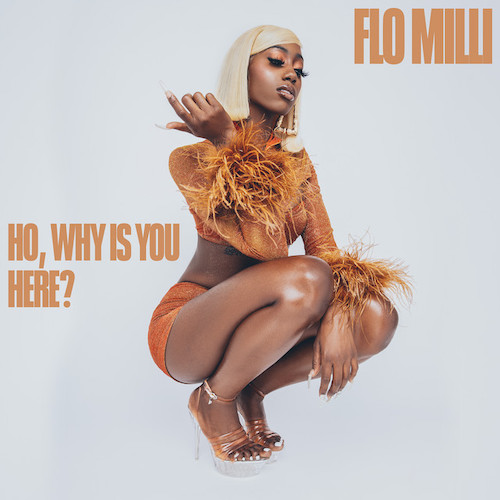 Ho, Why Is You Here?

Red flags go up the moment an artist is described as “critically acclaimed.” That often means a publicist injected an excessive amount of hyperbole into any press release they sent out or Wikipedia entry they edited. Speaking of the latter, I had to get to know who Flo Milli was before I could properly evaluate an album with an abrasive title like “Ho, Why Is You Here?” Bearing in mind that this is never an authoritative source, I at least managed to glean that her real name is Tamia Monique Carter, she hails from Mobile, Alabama, and her childhood inspiration was Nicki Minaj. Does that mean she raps like Nicki too? Let’s find out.

“Fuck the fame, all I want is them bands
If she keep on muggin, I’ma steal her man
He watchin my behavior cause he know I’m bad
Pussy put a spell on him, he in a trance
I do what I please and you do what I ask
He love my confidence and that’s what you lack
If you think I’m stealin swag, bitch, come and sue me” – “Beef FloMix”

The answer? Yes. She doesn’t have the exact same vocal tone but she’s not that far off. The topic matter is an even closer match. Flo Milli is proud of her punani and the power it has over men, and she’s very unapologetic about using her attractiveness to make money. What interests me more though is her song “Like That Bitch,” a track I’d argue would be a better theme song for Jade Cargill than “Epic.”The swagger of the song is perfect for a pro wrestler who already brands herself a queen B. “Even if I broke my leg and used a crutch I’d still walk around like that bitch.”

It’s that confidence that makes Flo Milli interesting. Female rappers have been bragging about how bad they are since before it was even called rap music, but Flo Milli combines it with trunk rattling beats like Yung Glizzy’s “Pockets Bigger” instrumental. There’s an unmistakable air of empowered attitude about her raps. She’s not just trying to sell sex to the horny, she’s directly telling you that she’s tricking men into doing her bidding without giving up anything in return. “He say he like me, I’m like ‘Oh okay!’/Roll my blunt up and get the fuck up out my face.” Damn, she’s ruthless as fuck.

The Whoismike produced “Not Friendly” sounds like it ripped apart Soulja Boy’s “Crank Dat” and glued it together as something better for the 2020’s. Flo Milli is an equal opportunity asshole, telling both genders to kiss her ass at every turn. “I hear these haters talking shit, it really don’t offend me/Cause in a crowd full of pussies, I see that you blend in.” Do you get it yet? Flo Milli is a savage. Maybe she’s only this fire when she can write the bars in advance, but I still can’t see why anyone would want to battle her. The raps on “Ho, Why Is You Here?” should be enough to scare off comp.

If there’s a downside to Flo Milli, not that there’s much to complain about, it’s that I can’t imagine a rapper going this hard crossing over. Even though she’s referencing both Slick Rick and Snoop Dogg with the hook to “May I,” the air raid sirens from Versatile would be reason enough to think it’s not going to cross over. “This pussy V-I-P and he can’t get in it.” Well that leaves no doubt whatsoever. This is absolutely the music that teenagers play to piss their parents off. That might also explain music videos like “In the Party,” in which a girl who is clearly too old to be in high school dresses up like a cheerleader to flex for her fans and enemies alike.

By the time you’re done listening to “Ho, Why Is You Here?” you’ll have the words “Ho, Flo Milli shit” burned into your brain to the same degree that “Mustard on the beat hoe,” “London on the track” or “If young Metro don’t trust you, I’m gon’ shoot you” is — and she’s not even the producer. It’s even more remarkable when you consider that the entire album clocks in at under 30 minutes, which means she’s made an indelible impression in less time than it takes to get seated at some restaurants. For once the hyperbole from a publicist who edited their artist’s Wikipedia entry seems to have been reasonably close to the truth. Flo Mill is indeed “That Bitch” and worth keeping your eyes on in the years to come. Only time will tell if she was hot for a moment or can sustain this level of swagger for the foreseeable future.